Two new followers have come our way -- (1) Susan, who is a GREAT friend and a retired fellow USAF court reporter.  Welcome Susan, thanks for coming along with us.  Susan doesn't have a blog -- I think she should start one, don't you?  She recently took a trip to Germany and I'm sure she has lots of pics she could share! (2) Levonne, whose blog is "A Camp Host's Meanderings:  An RV Adventure" (www.levonnegaddy.com.)  Check out her blog and her INCREDIBLE photographs -- you'll be glad you did.  I also found a blog for Nan and John, who recently signed on as followers --  "True Confessions of a RV Lovin Fiber Artist" (www.nantalleyfiberart.blogspot.com.)  I'm thrilled these folks want to follow our adventures -- hope you find something interesting along the way.

I appreciate everyone's thots and well wishes -- I feel great...not looking forward to add'l testing on Tuesday, but I will survive!

One thing I wanted to point out is the fact regular mammograms cannot show small tumors.  If I had just had a regular mammogram  -- like I did last year in NC -- there is no telling how long it would've taken for the small tumor to show its ugly head.  As I previously stated, Dr Hagans only orders diagnostic (compression) mammos.  My Mother passed at age 71 with Stage IV breast cancer.  It is an ugly disease.  Unfortunately, she had never had a mammogram -- why didn't I make sure she did??!!  This is a question I continually ask myself!  I encourage all you ladies out there to get a yearly mammo -- it will pay off!

I do not want to dwell on the fact that one small lesion tested positive for ca.  I will keep you informed about my add'l test results and what comes next, but I want to live my life to the fullest and not allow this little hiccup to be at the forefront of my life!

As I mentioned in my previous post, Peggy and Ken stopped off at Maumelle Park on their way to Texas.  We had a GREAT time.  After we watched the Arkansas Razorbacks beat the Texas Aggies on Saturday (October 1), we walked the Two Rivers trail and across the new bridge. 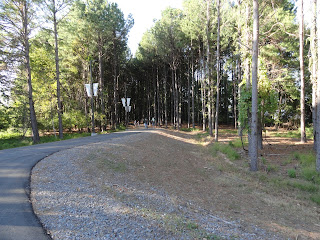 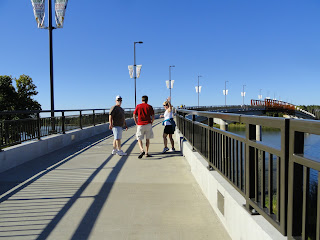 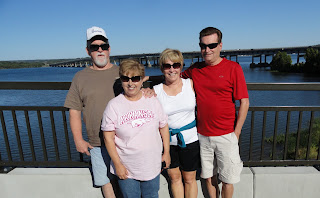 We then drove Southeast of Little Rock to a small, but well-known, restaurant -- well-known to Arkies at least -- "Cotham's."

I bet you are thinking -- what kind of a restaurant is that?  Cotham's has a long and distinguished history in Arkansas.  This original location was built in 1917.  It has served as a general mercantile store for area farmers and plantation owners since its beginning.  It also has served as a military commissary and lockup for local law violators awaiting trial by a circuit riding judge.

In 1984, a small eating area was opened to serve lunch to area farmers. 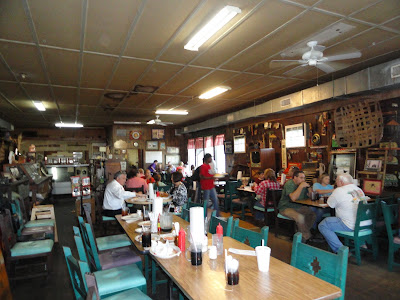 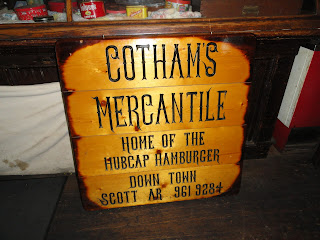 Soon discovered by prominent politicians -- notably Bill Clinton and Senator David Pryor -- the restaurant suddenly became the place to eat and greet for distinguished Arkansans from all walks of life.  Cotham's has now become an institution in Arkansas, whose reputation for outstanding food has gained national recognition.  It was featured on the television reality show "Man vs Food" on the Travel station.

We suffered through an order of fried green tomatoes... 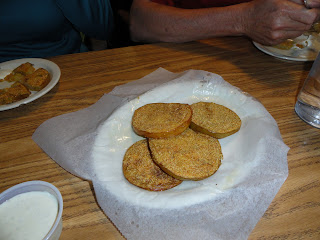 a Hubcap cheeseburger with onion rings... 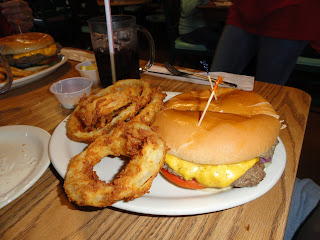 and for dessert -- Mississippi Mud Pie! 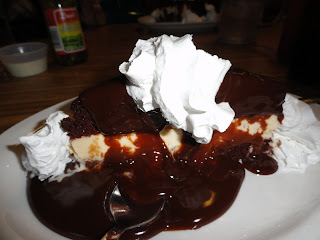 Ken and Peggy started Sunday with a bike ride. 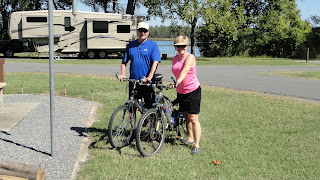 Later, we ate at El Porton's where Alan and I shared Fajitas... 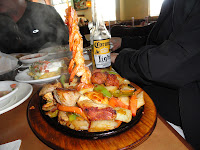 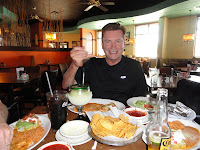 After all that food, we headed for a walk on "The Big Dam Bridge." 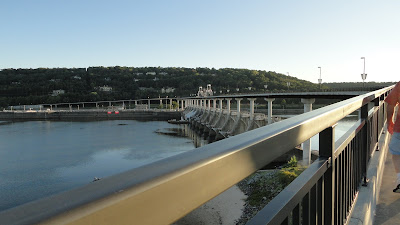 The Big Dam Bridge opened in October 2006 and connects Little Rock and North Little Rock and sits atop Murray Lock and Dam.  It is the longest purpose-built pedestrian/bicycle bridge in the country.  The part actually crossing the river is 3,463 feet and the ramps on either side account for the rest of its 4,226 feet.  In addition to being 4/5 of a mile long, The Big Dam Bridge is 14 feet wide, 30 feet deep above the dam and 65 feet above the river.  It rests on 14 concrete pylons, each weighing 37 tons.  The bridge cost $2.8 million.  The lighting alone cost almost $900,000.   The State of Arkansas did not go in debt to build this bridge. 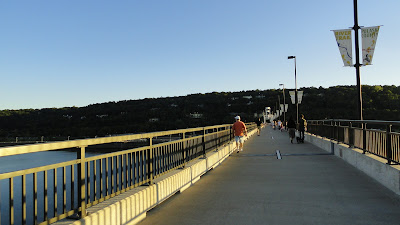 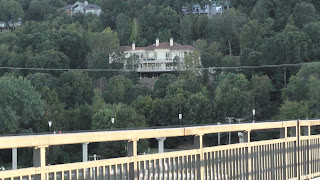 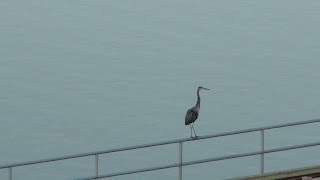 We got caught up watching this barge to see if it would fit in the lock... 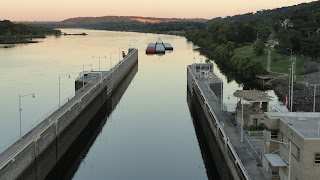 ...the tugboat had to disconnect from the barge... 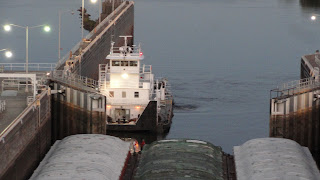 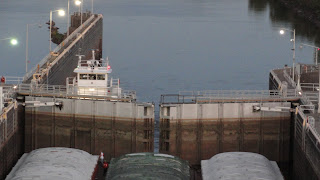 It was dark by the time we left. 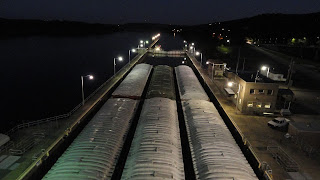 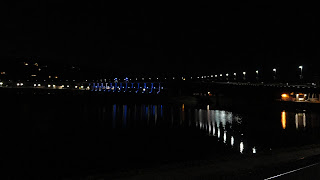 The Big Dam Bridge connects approximately 15 miles of scenic riverside trails in the cities of Little Rock and North Little Rock, and assists in the connection of 70,000 acres of various city, county, state and federal park lands.
Ken and Peggy's site 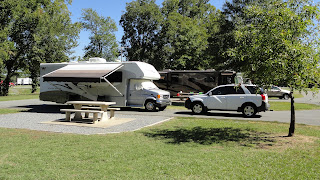 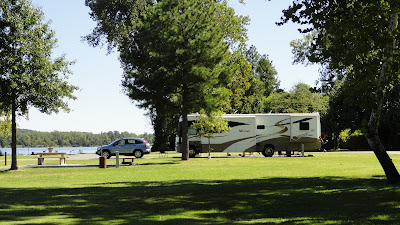 On Monday morning, we said good-bye to Peggy and Ken -- not really good-bye, but 'til next time when we meet them again down the road!
Ken drives the MH towing the car... 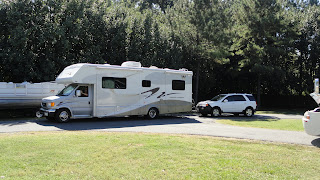 and Peggy drives the truck towing their boat. 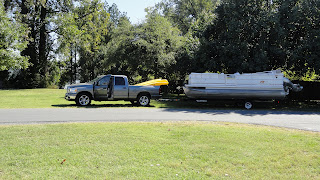 As I continually say, we are blessed with great friends and family.  It's hard to maintain a diet when there are such wonderful places to eat.  Stay tuned to see who we visit next and where and what we eat!


Posted by Alan and Marilyn McMillan at 9:31 PM