Work, work, work -- we asked for it -- we got it!  Yesterday we started learning our respective jobs -- Alan in maintenance and me in the office/store.  We only worked four hours yesterday, but we were pretty whipped by the time we finished...we are such wimps -- LOL! I sort of just hung out and watched how things are done in the office yesterday.  You can show me all day, but I have to get in there and actually have hands-on to really learn a particular job.  Today I got my opportunity -- I answered the phone and made a couple of reservations.  And we also priced and stocked new merchandise in the store.  We worked from 9:00 - 3:30 today, with 30 minutes for lunch.  My main job is to learn Campground Manager, the computer reservation system.  Last year at Branson I learned Campground Master.  Manager is more in-depth, but it does do most everything for you, as far as calculating the total cost of a reservation.  Also, we must take a one-night deposit for all reservations and if a reservation falls during a holiday, the total cost must be paid in full.  So, that means taking and processing credit card information over the phone at the time of the reservation.  One feature I really like  about Campground Manager is being able to email a customer their reservation confirmation straight from the computer.  I have never sold merchandise and worked a cash register before, but with modern technology, it doesn't appear to be too difficult.  Currently, the park is not that busy, but that will change next week.

Alan will be responsible for maintaining the pool, escorting folks to their sites, pumping propane, among other things.  Today he placed solar lights on top of poles next to some of the cabins and then helped build wooden benches from trees that were previously cut down.

This is a busy park, with over 100 reservations scheduled over the Memorial weekend.  It looks like we will be working 25-30 hours a week, maybe more during the holidays.  A couple of workamping couples scheduled to work has called saying they will not be coming, so that may make it difficult for those workampers that are here.  I have been very impressed with the workers and managers -- they take great pride in their work.

We had a staff meeting with a potluck last night.  Hamburgers and hot dogs were furnished and we all brought side dishes.  Alan made his "world famous" banana pudding as our contribution.

We were both tired after working our six hours today, so we drove into Cherokee and ate at Paul's Restaurant where we had Indian tacos...yummy.

Tomorrow all the workampers are going on an adventure -- a four-hour train ride through the Great Smokey Mountains.  It's one of those benefits we get for working at Yogi in the Smokies.

I hope to have pictures to post.  Our internet service appears to be better late at night or early in the morning, so I hope to get some pics of our train ride posted when we have a break from work.  In the meantime, you can check it out by reviewing their website here.
Also, if you really want to look at the campground, you can do that here.

We've had quite a bit of rain this week.  It started raining early Sunday morning and was continuous until early Monday morning.  At least it was a nice gentle rain.  Then yesterday it came a downpour, but the forecast looks much better for the remainder of the week. 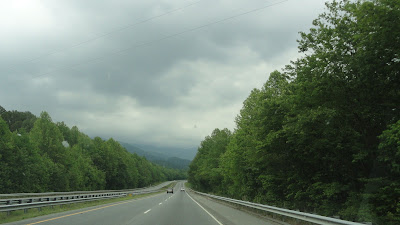 YEAH, I managed to post a picture.  I think it's all about timing -- it's currently after 11:00 on a Wednesday night.  As you can see, the mountains are living up to their reputation -- smokey -- or in the clouds in this pic.  It's beautiful here and I hope to get some good pictures soon.


Thanks for stopping by -- stay turned as we continue to share our workamping experiences, as well as our traveling and sightseeing opportunities.  God bless!
Posted by Alan and Marilyn McMillan at 11:24 PM 12 comments:

We have arrived in Cherokee, North Carolina, for our Summer workamping experience.  More to come on that later.  Although our Verizon Aircard shows 5 bars, it is very slow -- maybe because of all the trees and today it is raining, which doesn't help.  Perhaps an additional antennae would help -- if you have any suggestions, please let me know.  There is WiFi here, but it only has 3 bars, so I'm not sure how that could be better -- besides it's not secure.

I just wanted to take a moment and wish all Mothers a Happy Mother's Day.  Today I am remembering my Mother.  Although she passed 15 years ago at the age of 71, I still think of her almost every day.  I wanted to upload pictures, but the computer is just way too slow for that.

She was the only girl with two older brothers.  I can only imagine the horror her parents felt when she met and married my dad and left them and the State of Arkansas for North Carolina.  And undoubtedly, that is part of the reason she left my Dad and returned home with my older brother and me when I was only three months old.

There's a lot I remember about her, but the things that stand out the most to me today is her faith in God, her belief in prayer and her love for her family.  She always said, "You've got to have faith" and "You need to pray" about any given situation.

So, today, I remember her with great fondness, respect and love.

Be safe out there and God bless you, one and all!

Posted by Alan and Marilyn McMillan at 12:51 PM 11 comments:

A Diamond in the Rough

We left the RV Resort at Carolina Crossroads in Roanoke Rapids this morning around 9:30, heading to Cherokee, North Carolina, in the Great Smokey Mountains.  About an hour or so into our drive, it began to rain, but it wasn't bad.  However, the further we drove, the harder it rained.  After about 3 more hours, we decided we had had enough and began searching for a place to stop for the night.  We had planned to stop at Tom Johnson RV Park in Marion, North Carolina, about 95 miles East of Cherokee, but quickly realized that was not going to happen.  So, I hopped on the computer and checked out rvparkreviews.  There was a campground that had great reviews near Hickory, North Carolina, so we decided we would stop there.  I called ahead to make sure they had space for us, which they did.  They have a code-entry gate, so the owner gave me the code when I called.  Maybe that should have been a hint, but we really didn't think much about it.

We got off I-40 at Exit 119.  That's what it said on their website -- "take Exit 119."  No signs -- absolutely no signs indicating a campground anywhere.  The website said it was only a mile off I-40, so how difficult could it be to find?  We came off the exit and came to a stop sign -- "Okay, which way do we turn?"  The sign said "Henry River" to the right and we knew the CG was supposedly near Henry River, so we turned right.  The website stated to make sure we turned on "Whitener Drive," not "Whitener Road," so we're looking for Whitener Drive but never saw it.  We went more than a mile and we were like, "Where in the heck is this CG" -- again, NO SIGNS.  So I called the CG again -- they asked where we were.  Of course, we had no clue, but we know we missed the CG.  She starts asking me questions like do you see old houses, etc.  All I see are signs alongside the road with Bible scriptures.  She says you will come to a section with old houses and all of a sudden, we were there.  Alan pulls into an area where he thinks he can turn around -- WRONG!  It's not raining as hard as it was, but it's still raining.  We get out, look around and there's no way he can make the turn to turn around.  We are stuck!  He decides to disconnect the car.  We have a leather car cover we use when towing and we did not want to take it off because it was so wet.  He disconnects the car and guides me in backing it up.  He then turns the MH around and reconnects the car.

After all was said and done, we found ourselves at the site where "District 12" of the Hunger Games was filmed.  Now we haven't seen the movie, so we have no idea what the Hunger Games are -- other than the advertisement we saw on TV.  However, our grandkids sure know and thought it was "cool" that we ended up there.

I managed to snap a couple of pictures while Alan turned the MH around and hooked the car back up.  If you have seen the movie, maybe you will recognize something from the pics. 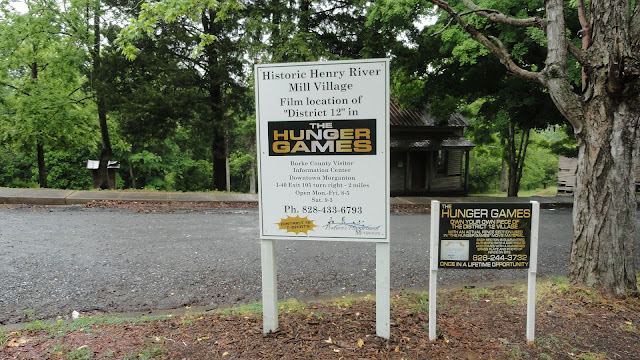 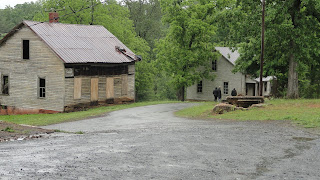 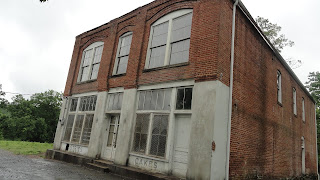 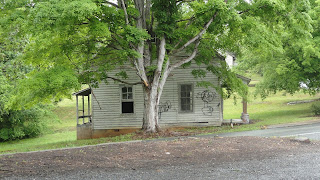 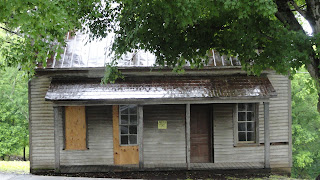 We managed to get back on the road and the CG owner stayed on the phone with me until we were actually on the right road to the CG.  You must turn left on Costner Road, then right on Whitener Road, but again, NO SIGNS.  The owner told us the County will not allow signs because they do not have a bathhouse or allow tents -- all RVs must be self-contained -- and the DOT says your CG must be accessible to everyone before you put signs on the highway.

A quarter of a mile or so down Whitener Road the road turns to gravel and you come to the coded gate.  (I'll get a pic of that tomorrow when we leave and post it tomorrow night).

By this point, Alan is NOT a happy camper.  When that gate opened and he saw the road beyond going down into a valley, I do believe if he could have turned around -- again -- he would have.  Anyway, we made it in -- the owner is super, super nice and was very apologetic about the problems we had in finding the campground.  By the time we got settled in and had some dinner, the rain stopped, the sun came out and we were able to explore our surroundings.

It turned out to be a very nice little park we dubbed as a diamond in the rough. 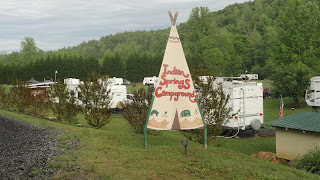 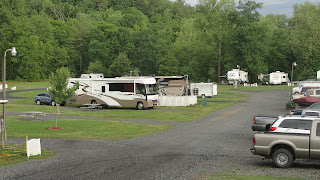 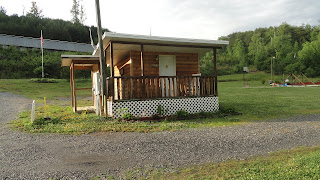 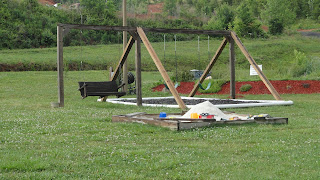 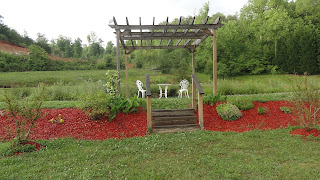 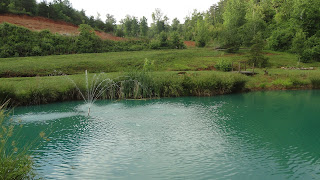 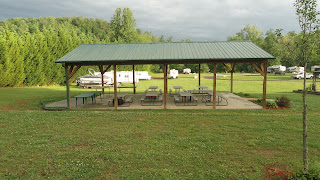 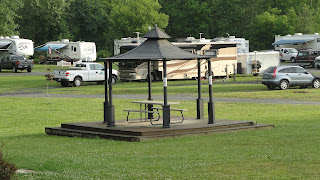 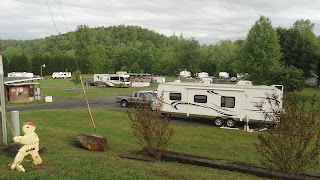 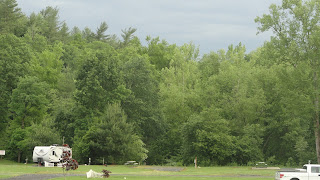 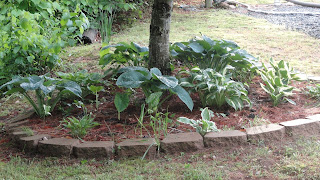 We even found the Henry River 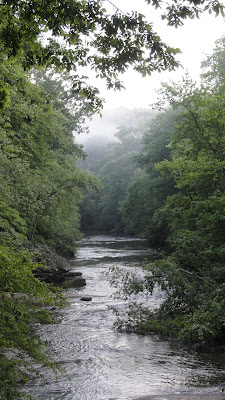 We are happy and thankful to be back on the road and are looking forward to exploring Cherokee, the Great Smokey Mountains and beyond.

Posted by Alan and Marilyn McMillan at 10:49 PM 10 comments: