Twenty years from now you will be more disappointed by the things that you didn't do than by the ones you did do.  So throw off the bowlines.  Sail away from the safe harbor.  Catch the trade winds in your sails.  Explore.  Dream.  Discover.
Mark Twain
Reflect upon your blessings, of which every man has plenty, not on your past misfortunes, of which all men have some.
Charles Dickens
Be at war with your vices; at peace with your neighbors, and let every new year find you a better man.
Benjamin Franklin

I want to welcome a few new followers:  "Bud Russman" is the "Arizona RV Guy." Check out his website at:  www.arizonarvguy.com for a lot of great information.  Also, our grandson, "Allen" has joined as a follower.  Allen rode with us from Arkansas to North Carolina back in October and we had a great visit.  Hated to see him go home -- he is a wonderful cook and wants to be a chef someday.  He can cook for us anytime!  "Joe and Betty" of joeandbetty.blogspot.com has joined us.  Take a few minutes to check out their blog -- you'll be glad you did!  And "Teri" -- Teri, I did not find a blog for you.  If you have one, please share it with me, so I can share it here.  Welcome to all my followers -- I hope you will find something interesting here.  Right now we are in a holding pattern until I complete treatment for breast cancer.  We are thankful for early detection and my prognosis is GREAT!


I also want to recognize the website of a friend:  http://www.rv-living-unlimited.com/.  It contains a ton of wonderful information, so please take a minute and check it out.  You might find answers to some of your questions.

Where did 2011 go?  Time seems to be flying -- faster than ever!    If time is flying by, does that mean we are getting old?  Most of the time, I don't feel old, even though our grandkids think so.  We just turned the corner on two years as fulltimers.  We workamped for the first time this year and it was a positive experience.  We met a lot of great workampers that will be friends for life and we are currently looking for another workamping experience for the summer.
We are so blessed to be able to live the fulltime lifestyle and we are especially thankful for the good report we received following my recent surgery...just in case you missed it, NO CANCER IN NODES and CLEAN MARGINS!  Although my Mother died with breast cancer 15 years ago, I never knew how complicated it was.  She was Stage 4 and it was very aggressive when it was discovered and cancer quickly invaded her bones.  It is a painful disease and took her life rather quickly -- a short 17 months after she was diagnosed.
Okay, guys, you may not want to hang around for the rest of this post because it's pretty telling and is really for the ladies out there, so this is your warning if you want to exit, feel free to do so.  Or, if your wife doesn't usually read blogs, you might want to encourage  her to read this one -- or you could just read it to her.  It's a little longer than most posts, but it contains a very important message
I didn't do the research when my Mother was diagnosed that I have done since my recent situation.  I am so thankful for the Baptist Breast Center and my doctor in Arkansas, who only orders "diagnostic" mammograms.  What's the difference you ask?  Well, there is no difference in the mechanics of the mammogram -- you still get the girls squeezed and it still hurts.  The difference is the technicians and/or radiologists are looking for something -- they are looking and searching for anything that looks odd, etc. In 2010, instead of traveling back to Arkansas for my yearly mammogram, I opted to have one here in North Carolina.  It was the WORSE mammogram I had ever experienced.  It hurt more than ever and I left in tears telling Alan I would not be going back there for another one.  I waited ten days and got the report in the mail that all was well.  For some reason, I didn't trust that report.  For 15 years, I had seen the same doctor in Arkansas -- had my mammogram and went directly to the doc's office for the report, so I decided to return to him for my 2011 mammo.  I had the mammo, then an ultrasound -- I had been down this road before so I tried not to be too concerned.  Next the radiologist came in to talk to me -- said there was an area in my right breast they had been watching since 2008 and it had changed.  But, in addition to that, there was a new area in my left breast that was "suspicious" and recommended I have a biopsy of both areas.  I left the ultrasound room and immediately went upstairs to see my doctor, who is a breast surgeon.  He recommended a biopsy of each breast, or a lumpectomy of each area.  I chose the lumpectomy, and the rest is history.  The right breast was negative, but the left was a 1.3 cm tumor, positive for infiltrating ductal carcinoma.  If I trust my doctor so much, why did I leave and come back to North Carolina for treatment?  I came back to be near our daughter and to go to Duke, one of the top ten hospitals in the country and ranked number eleven in breast cancer treatment.
I say all this to say -- to all the ladies out there, make sure you get diagnostic mammograms -- it could be the difference in early detection.  Why wait for a week to ten days to find out the results...find a doctor you trust and can see you on the same day you have your mammogram.  If I hadn't had the gut feeling things weren't right with that 2010 mammogram and followed through on those feelings, there is no telling how advanced the cancer would've been when finally detected.  I'll hush now but wanted you to know how important mammograms are.  I couldn't feel the tumor, neither could the doctor.  Without being diligent about having a mammogram -- a diagnostic mammogram and a trusted doctor -- it is a good possibility I would not have received the good results I did.  SO, go make that appointment and start the New Year off right by having a mammogram!  I'm off my soap-box now!!
As Christmas is only a few days away, may we not forget the Reason for the Season and Happy Hanukkah to all our Jewish friends.
Merry Christmas and may God continue to bless our voyage in 2012, as well as our family and friends everywhere!
Posted by Alan and Marilyn McMillan at 1:05 AM 7 comments:

I AM CANCER FREE -- YAY!!!!  No cancer in nodes or margins.  Thank you for your prayers and good wishes.  I will meet with oncologist on Tuesday to discuss radiation and where we go from here.  I could not have made it without the prayers of family and friends.  God hears and answers prayers -- even today.  We are very thankful and blessed!  Now we can soon move on with our plans!!!
Again, thank you...and that means Y-O-U!!
God bless
Posted by Alan and Marilyn McMillan at 5:21 PM 9 comments:

On Thursday, December 1,  I had surgery to check my nodes and to excise more tissue surrounding my anterior margin, which was positive on my September 30 surgery.  However, I won't have any answers until this Friday, December 9, but I'm still praying NO CA IN NODES.  I was happy to wake up from surgery to find no drain tube and little pain!  YAY!!  The surgeon removed the sentinel node plus two more nodes that were stuck together.  Yesterday my arm was achy.  The pain meds made me nauseous, so I opted for 500 mgms of Tylenol and it worked, thank goodness!  Today I feel much better and actually got to take a shower.

On Friday, before we left Duke, my daughter wanted to see Duke's Chapel.  So, we made our way there.  Unfortunately, parking is limited, so Alan dropped us off and drove in circles until we came back out.  On our walk up to the Chapel, I fell.  I stepped off the stone walkway and down I went.  My daughter was horrified, but thankfully, I didn't break anything -- hurt my pride more than anything.  I did scrape my knee and it jar'd me and gave me a headache.  But, we pushed on to the chapel, which is beautiful. 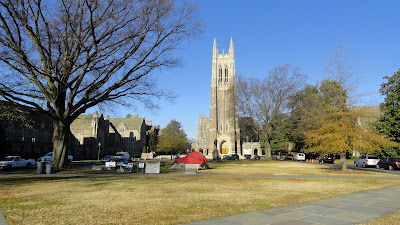 We didn't expect to see "Occupy Duke," but there it was as we made our way to the Chapel. 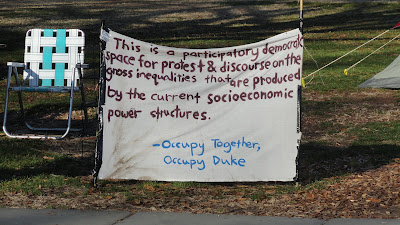 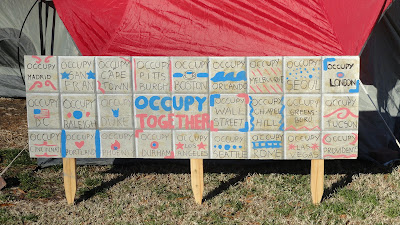 Nobody was around -- they had abandoned their post, probably for class. 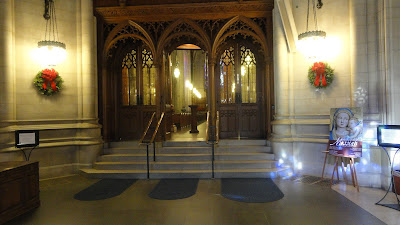 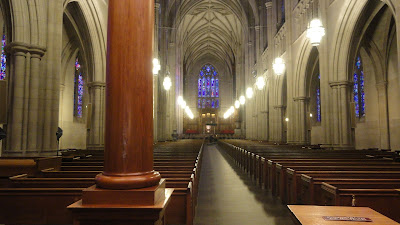 When James B. Duke selected the site for Duke University's West Campus in 1925, he chose to locate the Chapel on the site's highest ridge.  The Chapel was the first building planned for the new campus, but the last one to be completed.  Construction started in 1930, was completed in 1935, and cost nearly $2.3 million.  Although the Chapel was inspired by other buildings, including English cathedrals and chapels of other American universities, it is not a copy of any other specific building.
The architect was Julian Abele, chief designer with the Horace Trumbauer firm of Philadelphia, and was widely acclaimed and highly honored.
This was a very quick trip to the Chapel.  I'm sure we will have plenty of time to explore the Chapel and surrounding areas, as I move into treatment mode.  Our plan is to move the Motorhome to the State Fairgrounds in Raleigh.  Don't know when this will happen -- I meet with the Oncologist on Tuesday, the 13th.  Campground options are limited.  There is a state park -- Falls Lake -- but their sites are 30 amp, no sewer, $25 a day.  The fairgrounds are full hookups with 50 amp, $25. It is 23 miles from Duke, interstate all the way, so we've decided that is our best option.


Thanks to everyone for your prayers -- it means a lot to know people are praying for me and I felt those prayers on Thursday.  God bless!

Posted by Alan and Marilyn McMillan at 5:27 PM 9 comments: