I cannot believe I have waited so long to publish another posting.  I have no explanation -- not sure what my problem is, but anyway, here I am -- again.

When we first planned our trip to VA, Jon wanted to take us to DC to see the cherry blossoms.  We first thought we would go on Sunday, but since it was Easter Sunday, we decided we would wait until Monday -- maybe people would be back at work and there wouldn't be so many people.  So we set out on this journey at 8:00 Monday morning.  The drive to New Carrollton, MD took longer than originally thought -- approximately three hours, but it was a nice drive.  From Carrollton, we took the train.  Dalton was probably the most excited about the trip -- he has been studying Abraham Lincoln in history class and was anxious to see the Lincoln Memorial.

Waiting for the train in Carrollton. 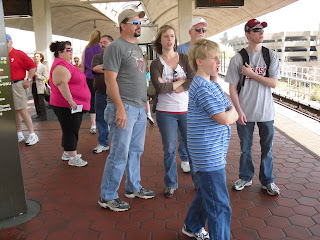 We rode the train to the "National Mall," an open-area national park in downtown DC. Standing in the middle of the National Mall, to the right in the distance, you can see our nation's Capital. 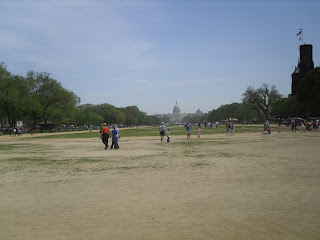 To the right is the Washington Monument and beyond that is the Lincoln Memorial. 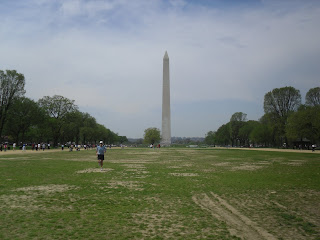 
We quickly moved on to the Lincoln Memorial. 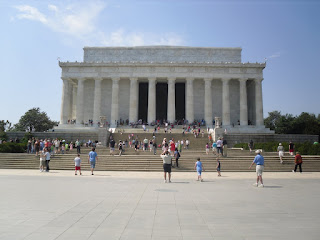 The exterior of the Memorial echoes a classic Greek temple and features marble.  The structure measures 189.7 by 118.5 feet and is 99 feet tall.  It is surrounded by 38 fluted columns, one for each of the 36 states in the Union at the time of Lincoln's death and two additional columns at the entrance behind the colonnade.  The columns stand 44 feet tall with a base diameter of 7.5 feet.  Above the columns the names of the 36 states and the dates in which they entered the Union are inscribed.

The north and south side chambers proudly display carved inscriptions of Lincoln's second inaugural address and the Gettysburg Address . 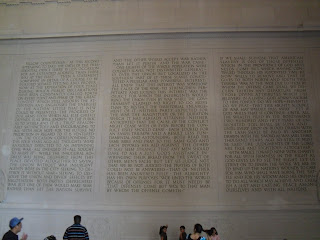 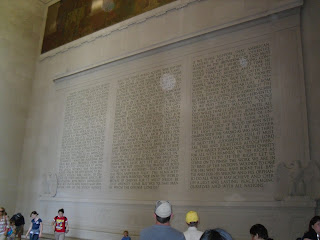 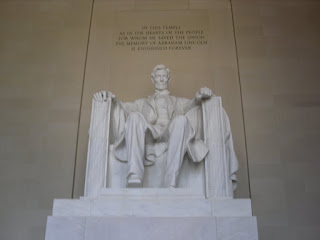 The statue of President Lincoln took four years to complete and is 19 feet tall from head to toe, the scale being such that if Lincoln were standing, he would be 28 feet tall.  The width of the statue is the same as its height, weighs 175 tons and had to be shipped in 28 separate pieces.  The epitaph above President Lincoln states:


"IN THIS TEMPLE
AS IN THE HEARTS OF THE PEOPLE
FOR WHOM HE SAVED THE UNION
THE MEMORY OF ABRAHAM LINCOLN
IS ENSHRINED FOREVER"
A little tidbit of trivia about Lincoln's hands.  A popular legend is that Lincoln is shown using sign language to represent his initials -- with his left hand shaped to form an "A" and his right hand shaped to form a "L."  The National Park Service denies this, but it is possible the sculptor, Daniel Chester French, intended Lincoln's hands to form the sign language of his initials to pay tribute to Lincoln for signing federal legislation giving Gallaudet University -- a university for the deaf -- the authority to grant college degrees.  Also, it has been reported that Mr. French had a deaf son and was very familiar with sign language.  I heard this story when Alissa, Sarah and I visited DC several years ago.
Today, over 3.6 million people visit the Lincoln Memorial annually.  In 2007, the Memorial was ranked the seventh in the "List of America's Favorite Architecture" by the American Institute of Architects.
We didn't know the Easter Egg Roll was taking place at the White House.  We just thought it was held on Easter Sunday and we didn't know it lasted all day -- you don't know that from seeing it on television.   The entire back area of the White House was blocked off and people were standing in line for blocks and blocks, with their children, waiting for their turn to do the Easter Egg Roll. 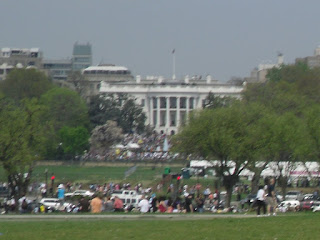 We walked what seemed like miles to get around the White House and all the people to the front. 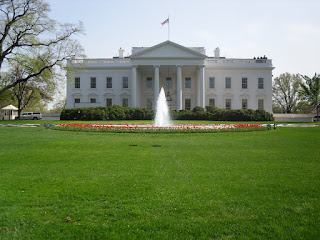 We also visited the Korean War Memorial, WWII Memorial and the Vietnam Wall -- all very impressive. 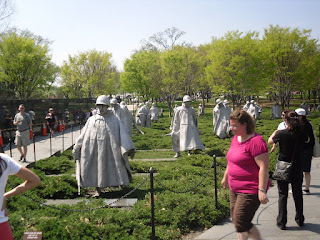 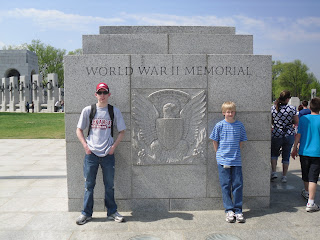 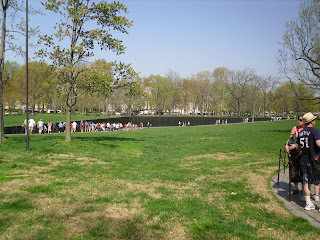 By the time we walked back to the National Mall, we were exhausted -- Alan's foot and my knees  hurt.   There is so much more to see in our Nation's Capital and we hope to make another much longer visit when we have more time.  The truth is we didn't plan very well -- taking a tour would have been much better than walking so much.  A couple at the campground told us about a Maryland KOA that provides transportation  to and from DC several times a day.  This will definitely be something we will think about next time and we will be more prepared.
By the time we made our way back to Carrollton where we had parked our cars, it was approximately 5:30.  We wanted to find a place to eat to allow the traffic to die down before we proceeded back to the campground.  We ended up at "On the Border."  The waitress asked us to wait a minute so they could get seating together to accommodate eight.  We watched as they put a couple of tables together.  Then the manager appeared, stating he had "intercepted" our waitress in the kitchen and it would be 20-30 minutes before he could seat us.  We were stunned -- we had just watched as a table was set up.  When we questioned this, he said he couldn't seat us if he couldn't serve us.  We were like -- WHAT, all we want to do is sit down.  He held fast to not seating us, so we said forget it and we went next door to Chili's, who immediately seated us.  When we told the waitress at Chili's what had just happened at On the Boarder, she reported it to the manager, who in turn came out and offered us free appetizers and desserts.  We were like, yes, this is how to treat your customers.
Following our meals, we drove the three hours back to the campground -- it was after midnight and we were all very tired.

I forgot to mention anything about the Apple Blossoms, one of the reasons for our trip to DC.  As it turned out, they had peaked the week before and there were very few blossoms left.
The following day, Tuesday, April 6, we decided we were not doing anything -- just hanging out at the campground since it was our last day.  We did go to Wal-Mart to purchase the 'fixins for having a hot dog/marshmallow roast.  We had passed this shop several times and it bore the name of Alissa," minus an "s."  With all the things sitting around outside, we thought it was open and stopped.  However, as it turned out, looks were deceiving -- it was not open. 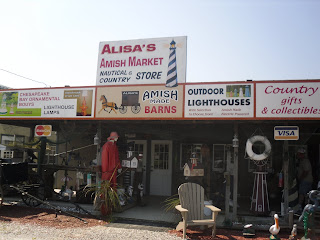 Across the street, we noticed this sign in front of a church and thought it was a good message since we had just celebrated Easter. 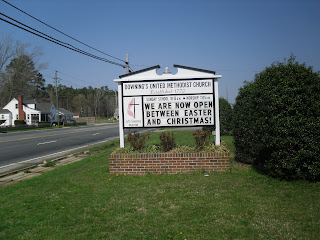 Jon, Mindy and Allen came over to roast hot dogs and marshmallows.  We got out our Arkansas chairs and had a great time.  It brought back loads of memories and the many camping trips we took when the kids were younger.  Jon even made the comment that this was the first time the four of us had sat around a campfire in 20+ years. 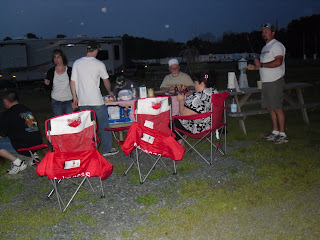 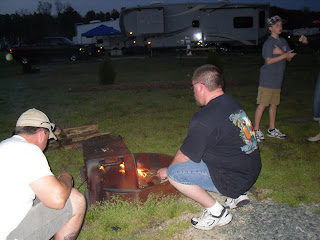 All and all, we had a great time and a wonderful visit.  If Alissa and Matt hadn't been with us, we would've stayed longer.  We left the next morning and drove back to Nashville, NC.   Not sure why it has taken me so long to put this post together -- it's not that difficult to do.
The countdown is on -- we will be leaving here in four weeks, June 14, for points west.  We are excited and looking forward to our trip to South Dakota and everything in-between.  I will try extremely hard to keep up this blog, so we can keep everyone informed of what's happening with the McMillans.  In the meantime, may God bless our family and friends and may God continue to bless our voyage.
Posted by Alan and Marilyn McMillan at 8:56 PM 1 comment: