As you know, I haven't been posting much lately.  We have been busy working and going to various shows.  I will be posting on our job and the shows hopefully soon.
Thanks to everyone who is praying for Gina.  She is in the hospital and they are trying to get her pain under control, so she still needs our continued prayers.  She is also on a strong IV antibiotic.
I have one more request -- another friend, Jo, is fighting breast cancer for the second time.  She has had both breasts removed and now has an infection in one of her implants.
I appreciate all who responded to my last post and are praying for Gina and those who now will also pray for Jo.  May God bless you all!
Posted by Alan and Marilyn McMillan at 2:07 PM 3 comments:

I am asking everyone to please pray for my friend's daughter, Gina.  Gina is in her mid-40s and has been fighting Primary Pulmonary Hypertension for 18 years.  She currently has a very bad infection attacking her body.  Although Gina lives in Little Rock, Arkansas, she is on her way to Chicago where she has been treated for several years by a specialist in the PPH field.  Please add Gina and her family to your prayer list.
Thank you & God bless!
Posted by Alan and Marilyn McMillan at 3:10 PM 5 comments:

One night last week, several of us workampers went to see "Noah, The Musical." 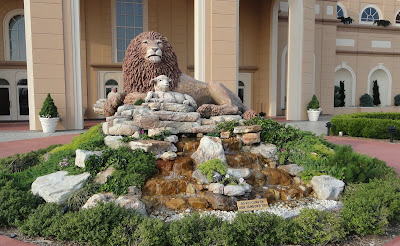 In January 1993, Sight and Sound Theater's founder and producer Glenn Eshelman attended the Pennsylvania farm show.  For over a month he had sought the Lord's direction for a new show to produce at Sight and Sound. As he stood amongst the dairy cows, he watched the thousands of people drawn to the animals -- families and children.  In that moment, Glenn felt the Lord speak to his heart, telling him to do a show on Noah.  Glenn's prayer had been answered.  In June 1995, "Noah, The Musical" premiered. 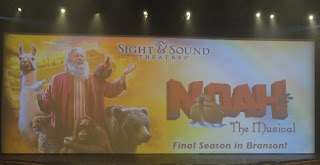 We all enjoyed Noah but thought it was a bit long.  The seating was very tight and at Intermission we talked about leaving, but since we had paid for it, we decided to see it through to the end.  And we were glad we did.  As Act 2 began, the interior of the Ark was revealed -- and the audience then felt as though they too were in the Ark with Noah, his family and all the animals.  There were over 65 live animals that performed in Noah, in addition to over 100 animatronic animals and 6 "actor animated" animals.

Unfortunately, no photography was allowed.  This is the last season for Noah in Branson.  It will be replaced with "Joseph."
I'm sure kids would really like seeing all the animals -- real,  animated or otherwise.
We are settling into our jobs and learning just what it means to be a  "workamper" -- now if we can just remember it all:)  I am learning Campground Master, the reservation software used by most commercial campgrounds.

I am still experiencing some problems with Blogger -- sometimes it works okay, sometimes not...maybe it's me.
Thanks for stopping by.  If you're in our area, please stop by and see us.  In the meantime, God bless you, one and all!
Posted by Alan and Marilyn McMillan at 5:47 PM 1 comment: