LITTLE HOUSE ON THE PRAIRIE

We all remember 'Little House on the Prairie.'  Our daughter was a big fan of the show.  She used to say she wished she had lived during that time.  It was not an easy life for sure -- none of the modern conveniences we often take for granted today.
Laura Ingalls Wilder's homestead is located in De Smet, (pronounced Des-Met), South Dakota.  We saw the sign on I-90 as we drove from Sioux Falls to Mitchell.  The last time we were in South Dakota, we did not take the time to drive the additional hour to visit the homestead.  This time I was determined we were going to stop and at least take a picture for our daughter.
We took the back roads and it seemed to take forever.  In Clinton, South Dakota, East on Hwy 34, we came across this historical marker. 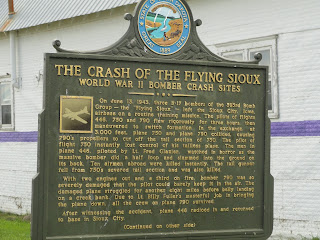 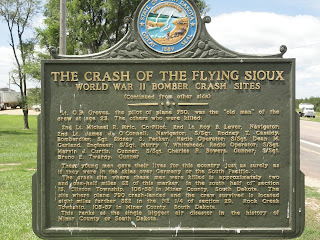 As you can read, this crash in 1943 is the largest air disaster in South Dakota history.  We are always saying we are going to take a trip and stop and read all the historical markers we see.
We turned North on State Hwy 25 and about the time we were ready to give up, there it was. 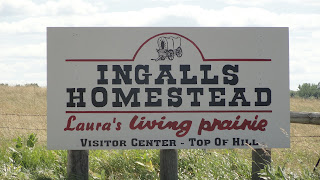 In 1862, President Lincoln signed the Homestead Act.  This act gave "any person," who was the head of the family, a 160 acres to try their hand at farming for five years.  The individual had to be at least 21 years of age and was required to build a house on the land.  If after five years, the farmer could prove his land successful, he paid a filing fee and received a deed.
Free land lured the Ingalls family to the Dakota Territory to claim a homestead.  School, church and a part-time job was important to Charles Ingalls (Pa) and his family.  The Ingalls Homestead met their wishes and was only a mile from the small town of De Smet.  The land was perfect in many ways and had good water, which was a very important commodity.  In 1880 Pa filed on this homestead and in 1886 the final papers were filed and a declaration printed in the De Smet News.  This 157.25 acre homestead cost Charles and Caroline Ingalls $16.00 in filing fees.  When Mary Ingalls, one of Laura's younger sisters, became blind in 1879, Pa said to Laura, "You have to see for Mary in words." Laura Ingalls Wilder wrote many of her Little House stories about this land.
We paid our $10 each for admission and started out to explore.  My first thought was $10 seemed a little high, but by the time we had finished our visit, I realized it was well worth the $30 for us to see, hear and learn the history of the early settlers to the Dakota Territory.  It was a great day for being outside -- cool and windy.
Remember the old merry-go-rounds in school yards?  Well, Dalton thought I needed a ride. 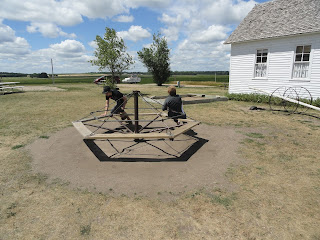 It made me dizzy yester-year and it still makes me dizzy today.


Many settlers fashioned their wood farm wagons into covered wagons with covers stitched out of heavy cotton duck material.  When they reached their destination, the wagon box was removed from the running gear and set on the ground making it their claim to the land.  The running gear would then be used to haul materials to build a permanent home. 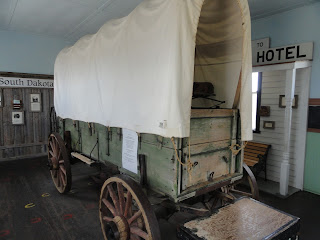 Personally I cannot imagine traveling by covered wagon far away from home and family, across all sorts of terrain, including steep mountains and hot deserts, but many did it.﻿
Dalton and Alan climbed in for a closer look. 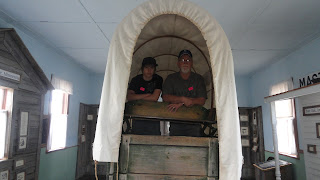 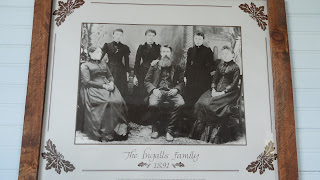 Laura when she was writing the Little House books 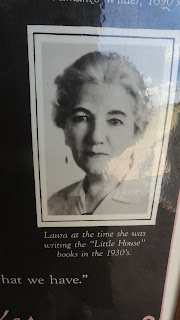 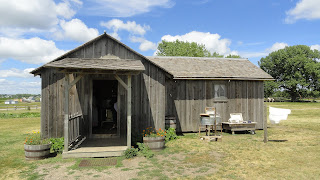 In the Spring of 1880, he built a 'half-house' of 140 square feet for his family of six.  Laura described it as having a slanted roof. In 1881, an additional 140 square feet with two small bedrooms were added.  Laura wrote that the two bedrooms each had a window.


While attending the Iowa School for the blind, Mary learned to play the organ.  Pa and Laura worked and saved money to purchase a pump organ as a surprise for Mary's homecoming.  To have room for the pump organ, Pa built a 12x16 foot final addition to their little house. 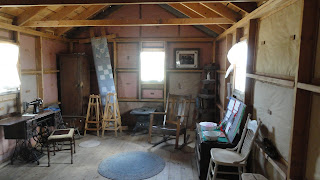 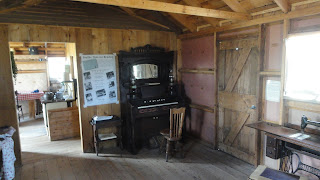 After the completion, Mrs. Ingalls declared their little shanty a real home.  (The reconstruction of the current little house was built according to the specifications stated in the proving up paperwork required to obtain homestead ownership of the land.)
Pa Ingalls also built a 16x24' hayroof barn into the hillside west of the house. 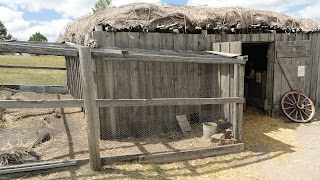 The use of hay as roofing material is an example of the resourcefulness available to him.  Prairie grass grew in abundance on the treeless prairie. The current barn is an active shelter today for chickens.  We also found a newborn calf sleeping and a cat hiding inside. 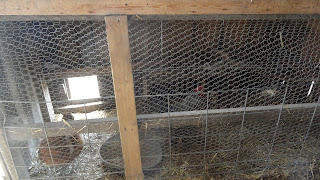 At the stable, we met the horses who would be pulling the covered wagon with all the visitors to the school house.  I cannot remember the names of both horses, but I do remember one was named David.

We rode in the wagon approximately a mile to the one-room schoolhouse. 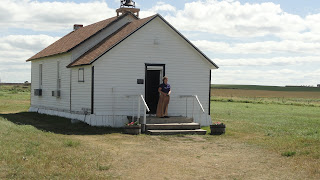 We all jumped out of the wagon -- well, all the kids did -- and hurried into the classroom so we wouldn't be late for class.
Johnson School was established in 1881, but the original burned in a prairie fire.  This structure was built in 1889 and was located nearby at Thompson Lake before being relocated to its current location.
Everyone was encouraged to choose one of the stylist outfits and sit in a desk. 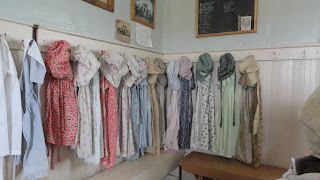 Do you know what this poem is referring to?  You probably cannot see the last work in the poem, but the word is "gold." 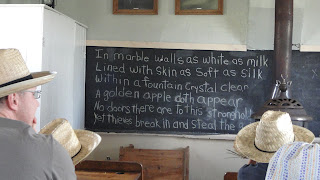 The answer is "egg."
The teacher asked the kids if they knew how students were punished back then?  There were various answers from being sent to the principal's office to receiving a spanking.  One of the students demonstrated it for the others by drawing a circle on the chalkboard and putting his nose in the circle. 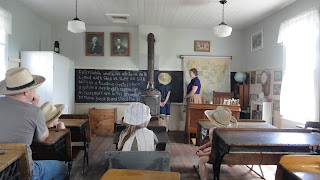 There was even a spelling bee.  All the students stood in front of everyone as the teacher gave each a word to spell.  We were really surprised Dalton joined in because he was the oldest and tallest, but we were proud he did.  His word was "buttercup."
He looks thrilled...LOL.
﻿ 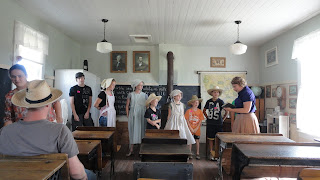 Each child spelled their particular word correctly and ranged in age from six years to fifteen years.
We learned that a little country church was recently moved to the homestead, so we decided to take a look. 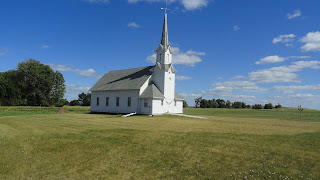 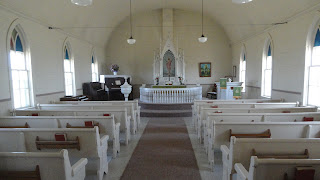 It is beautiful
It's used for weddings and other special events, such as the staff's Christmas party.
You can also rent "covered wagon" campers.  There are four of them in a semi-circle.  It's like you just stopped for the night after a long day traveling in your covered wagon. 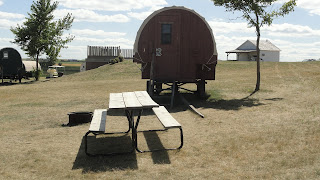 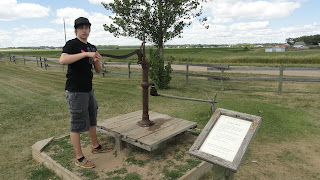 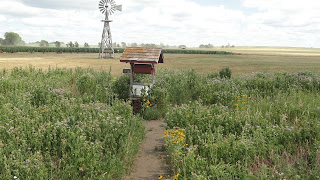 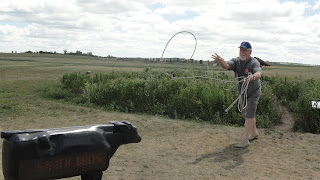 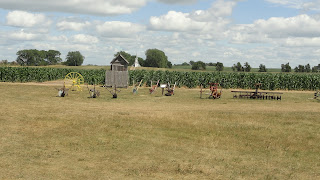 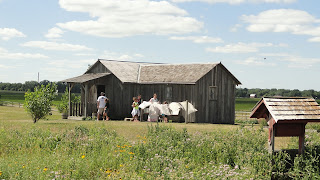 We had fun visiting the "Little House on the Prairie" and would recommend it to others.  We always enjoy learning about the early settlers and what they endured in their journeys.  They could teach each of us something above love of family, hard work, ingenuity and survival.  South Dakota was not an easy place to settle in with long, harsh winters.
This post concludes our visit to Mitchell, South Dakota, and the  surrounding areas.  Stay tuned to see what else we see and do in South Dakota.
Thanks for stopping by.  Until next time, may God continue to bless our voyage, our family and friends and YOU as well!
﻿
﻿
﻿
﻿
Posted by Alan and Marilyn McMillan at 12:08 AM