The first phone call I made this morning was to the Raben Company in Louisville.  I spoke with "Janice" in their accounting department.  She told me the charges for the new tire would be $731.42 and she would be processing that today.  I asked her if that included the $200 for opening the warehouse after hours to retrieve the tire.  She said, "Yes."  I then told her I thought that was a little exorbitant, that I could understand $50, $75, but I felt $200 was taking advantage of folks in a stressful situation.  I gave her our email address and requested she email the receipt to us.  I also verified that their corporate office was in Evansville, Indiana, and what the phone number was, which I had already located via Google.
I immediately telephoned the corp office and spoke with Mark Raben.  He told me they were a family business, having been in business 60 years.  He also explained why there was a $200 charge for after hours, stating they mainly serviced 18-wheelers and that it took approximately 2 hours to change a truck's tire in all sorts of weather and at all times day and night.  However, that was not our case since we actually drove, picked up the tire and they performed no service, other than providing the tire.  He was surprised that "John" did not actually wait for us with paperwork indicating we had purchased the tire.  As far as John's words that he would meet us if I was willing to pay him $500, he said he had never heard of that happening before.  He quickly apologized and said he would call and have the $200 after-hour fee removed from our charges.  We exchanged email addresses in case he was unable to reach us by phone.
I then called FMCA to see how to handle the warranty on the blown tire.  I was told to contact Michelin.  I then called Michelin Consumer Relations who told me we had to have a certified Michelin dealer look at the tire and gave me a phone number for the dealer to call.
The next call on the list was to Snyder Tire in Fletcher, North Carolina, where we purchased the tires last September.  Since we also want to have the tires rotated and the new tire balanced, Snyder does service work on a first-come, first-serve basis.  Mallory gave me the name and phone number of a campground fairly close to Snyder Tire.
We packed up and left Clinton, Tennessee, for Rutledge Lake Resort in Fletcher.  We drove in and out of rain as we crossed the Smoky Mountains, and as we pulled into the campground, the sky opened up and it poured! 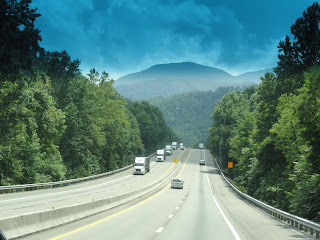 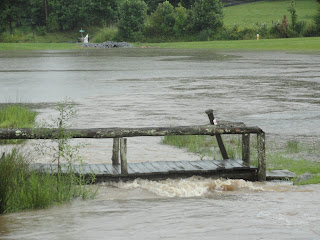 This evening I missed a phone call from "Brad" Raben.  His voice mail stated he had read my blog post -- WHAT??? -- and that we could again purchase the new tire through FMCA Michelin Program at a cost of $454.  He further stated that the $900 allocation on our credit card had been released.
It wasn't long until I received a call from Mark Raben, who reiterated Brad's voicemail.  I gave him our FMCA membership number.
We are very appreciative of the Rabens' professionalism in handling this situation after the fact.  They could've just said, "sorry, that's our policy," but they didn't.  They resolved what we comprehended as bad business practices in a timely, efficient manner to our satisfaction.  We are very thankful no one was hurt and there was no damage to our motorhome -- it could've been a lot worse.

One more thing and I'll hush.  On Saturday prior to the blown tire incident, we stopped for lunch.  A man was standing on the side of the road with a sign that stated "hungry homeless vet."  Since we know there are thousands of homeless vets, we wanted to give him something, but not money.  We bought him a burger, fries, drink and even a Frosty from Wendy's.  When we came out, we saw him pick up his duffle-looking bag, his liter bottle of drink and package of chips and started walking.  I called to him, stating we had something for him and gave him the bag.  He thanked us and continued walking.  We watched from the motorhome as he walked to a nearby car, got in and drove away.  It was not a new car, but it wasn't a bad car either.  We don't know if he was truly homeless, but it doesn't matter.  We did what we thought we should and it was also an example to our grandson of helping someone who may be less fortunate than we are.  Dalton kept saying over and over, "We are such a nice family." LOL

Thank you for listening to our woes and providing encouraging words.

God bless and thanks for stopping by!
Posted by Alan and Marilyn McMillan at 11:18 PM