Everybody was Kung-Fu fightin'

Do you remember that 'ole 70s song?


That song was playing in my head as we set off to see the show, "The Legend of Kung-Fu."
The Legend of Kung Fu features a cast of more than 60 performers who share the ancient art of Kung Fu in a theatrical setting.  The show has been performed more than 4000 times around the world, having performed in China, Russia, London, Vancouver, Japan, just to name a few.  It was chosen as the main show for the 2008 Beijing Olympics.  This Broadway-style show is one of the largest theatrical productions in Branson.
The story follows a fearful, young boy named Chun Yi as he enters into the apprenticeship of a Buddhist monk.  Under the teachings of a wise master, he struggles against distractions as he tries to find the dedication to adapt to the strict disciplined lifestyle.  Along the way, he learns the skills of martial arts.
The Legend of Kung Fu is filled with acrobatic stunts, martial arts displays and emotion-filled dancing.  This performance is a unique opportunity to experience lighting, sound and special effects as the story unfolds.  The transformation that Chun Yi goes through in his life is very interesting.
There was so much energy in this show, I was exhausted by the time it was over and we left the theater!
Would I go see it again -- probably not, simply because once is enough.  However, we are happy we had the opportunity to see it, as it is worth the $36 (adult) ticket.
On Tuesdays, "Famous Dave's" -- a BBQ restaurant, offers this platter for $23, regularly $34... 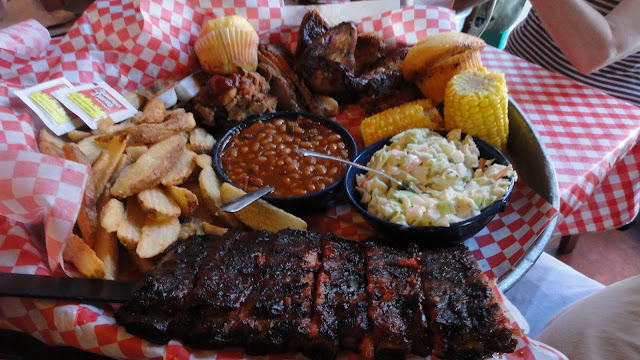 The fixins' consist of ribs, brisket, chicken, cole slaw, french fries, beans, corn muffins and corn-on-the cob and is actually served atop a garbage can lid.  We always have enough to bring home for lunch the following day.


Several workampers joined us last Tuesday for  this delicious meal -- you can tell, we take eating very seriously! 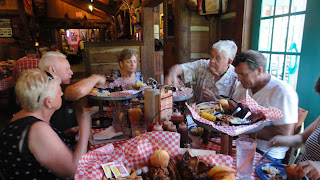 We also are working out at the Branson Rec-Plex -- trying to build up strength and perhaps lose some of the weight we have gained from eating all the delicious food in the Branson area. 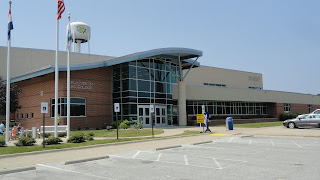 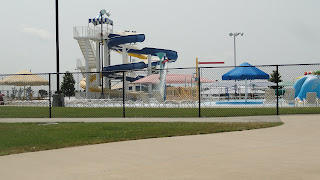 Branson is a VERY busy place.  This week there is a girls softball tournament going on and last week there was a national dance competition with over 120 dance studios from around the country participating. We continue to enjoy our time here -- although it is very HOT!  However, listening to the news and weather forecast, it's pretty much hot all over -- except for you lucky folks in the Northwest who apparently are receiving everyone else's rainfall.
Thanks for taking the time to stop by.  Until next time, God bless YOU -- one and all!
Posted by Alan and Marilyn McMillan at 2:31 PM