Have you had the opportunity to visit Branson?  For those who do not know, Branson is located in the southwest area of Missouri and is surrounded by the Ozark Mountains.  It is a unique place and well known for it's family-friendly shows.  There is a lot to see and do -- so not only are we learning our jobs, we are also taking in the shows.

We recently had the pleasure of seeing SIX.  What is SIX you ask?  It's a group of six brothers.  They actually come from a family of ten brothers, no sisters.  Can you imagine having ten boys -- YIKES!  When they were very young, their father noticed they could make up songs and harmonize without help from him or anyone else. Being musically talented himself, he decided to sit them down at an old piano and teach them gospel hymns.  There are six voices, zero instruments, but it sounds like various musical devices are being played as they sing.  Actually,  it's the six brothers making all the sounds.  Families seem to be important in all the shows we have attended, as are Veterans.  All military personnel, past and present, are recognized at every show.

Video and/or audio recordings are not allowed inside the theater.  However, I did find some of SIX' music on YouTube.  Here is SIX paying tribute to those who have served and are currently serving in our military:

Brother Owen with a drum solo
Each brother drives a Chevy Camaro -- all six are parked in a line outside the Hughes Brothers Theater when SIX is performing. 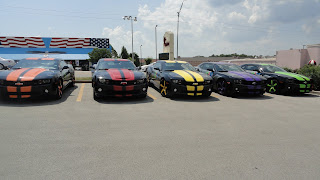 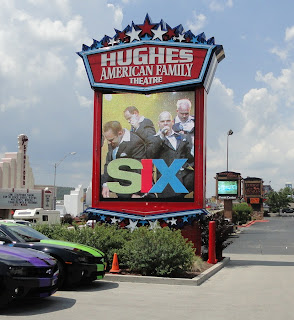 Apparently, on this particular day, one brother rode with another -- since there were only five cars in the parking lot.
In the lobby of the theater, this plaque lists the names of various celebrities who have entertained in the Hughes Brothers Theater: 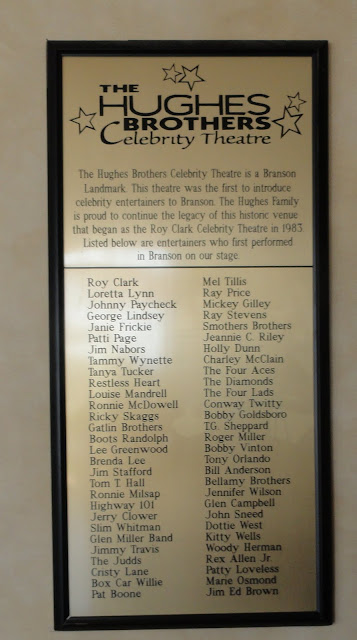 I want to welcome a new follower -- Sara.  You can find her blog here.  Sara is in the process of preparing to retire and then will start her adventure as a fulltimer.  Welcome, Sara!

Also "onelittlemonkey" left a comment.  I could not find a blog for you -- if you have one, please let me know.  We try to watch Dr. Cloer online on Sunday mornings.  Thanks for the nice words and we look forward to visiting Englewood again!
Stay tuned as I will continue to report on other shows we have seen in Branson.  In the meantime, may God continue to bless our voyage, as well as our family and friends everywhere.
Posted by Alan and Marilyn McMillan at 8:33 PM