Since March is Women in History month, I thought I would share some of information on the only female military Medal of Honor recipient -- Dr. Mary Edwards Walker. 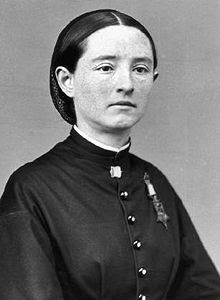 Dr. Walker was born on November 26, 1832, in Oswego, New York.  She was the youngest of five daughters and had one younger brother.  As a young woman, she taught at the local school and earned enough money to pay her way through Syracuse Medical College, where she graduated as a medical doctor in 1855 as the only woman in her class.  She married a fellow medical student, Albert Miller, and they set up a joint practice in Rome, New York.  The practice did not do well, as female physicians were neither trusted or respected.  In 1860, Dr. Walker briefly attended Bowen Collegiate Institute in Hopkinton, Iowa, where she was suspended because she would not quit the all-male debating society.
At the beginning of the Civil War, she volunteered for the Union Army as a civilian, working in the nation's capital.  Although Dr. Walker was a physician,  she was only allowed to practice as a nurse.  Finally, in September 1863, she was awarded a commission as a "Contract Acting Assistant Surgeon," becoming the first ever female U.S. Army Surgeon.  Later, Dr. Walker was appointed assistant surgeon of the 52nd Ohio Infantry.  During this service, she frequently crossed battle lines, treating civilians.  On April 16, 1864, she was captured by Confederate troops and arrested as a spy.  She was sent to Virginia, but in August of that same year, she was released as part of a prisoner exchange.
Her work so impressed leaders that after the war, Dr. Walker was recommended for the Congressional Medal of Honor by Generals William Sherman and George Thomas.  On November 11, 1865, President Andrew Johnson signed a bill to present her the Medal of Honor, the first woman to receive that award.  To date, Dr. Walker is still the only female recipient of the Medal of Honor.
In 1917, Congress created a pension act for Medal of Honor recipients and in so doing created separate Army and Navy Medal of Honor Rolls.  At that time, the Army decided to review eligibility requirements for the Army Medal of Honor Roll.  The Medal of Honor Board never rescinded any medals but deleted 911 names from the Army Medal of Honor Roll, including that of Dr. Mary Edwards Walker.  Dr. Walker continued to wear her medal until her death on February 21, 1919, at the age of 86.
And in 1977, President Carter restored her medal posthumously. 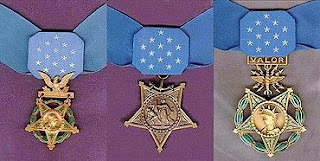 Today, the Medal of Honor is as follows, from left,
the Army, Navy/Marine Corps/Coast Guard, and Air Force.
Following the war, Dr. Walker became a writer and lecturer, fighting for the right of women to wear healthy clothing which did not restrict their movement or hurt their internal organs, as did heavy skirts and corsets.  She frequently wore her own "uniform," which was comprised of a long coat and bloomers.  When women began enlisting and even receiving commissions in the military, they were often issued uniforms consisting mostly of skirts, with pants rarely seen and then only worn by female officers.  Women weren't issued "fatigues" until the 1970s, and the Battle Dress Uniform (BDUs) was issued to women soldiers for the first time in the 1990s, shortly after I started working for the United States Air Force.
As of September 30, 2010, women comprised 14.5% of the total active duty forces, 19.6% of the total Reserve forces and 15.2% of the National Guard, for a total of 404,228 female Americans currently serving their nation.

To say women in the military have come a long way is an understatement, but there is still only one female Medal of Honor recipient.  There have been hundreds of military men awarded the Medal of Honor.  Wouldn't it be great to see another female receive this prestigious award?


Until next time, may God continue to bless our voyage and our family and friends, near and far.  And may God bless and keep our military men and women safe throughout the world, as they fight to protect us.
Posted by Alan and Marilyn McMillan at 10:38 PM