Although it is pouring down rain, we are warm and snug in our home on wheels.  We knew yesterday that today would be a rainy day, so I made sure I got outside for some needed sun.
I have been corrected -- what I thought was a Monarch butterfly is actually a Tiger Swallow Tail butterfly -- what do I know about butterflies?  In a previous posting, I stated I had worked most of my life and never really had any hobbies and didn't know much about wildlife.  Well, I proved that today by talking about Monarch butterflies when it is a Tiger Swallow Tail instead.  So, I stand corrected, but I do love looking at different animal species and hopefully, I will continue to study and learn more.  We're never to old to learn, right?  After I made the revision to this post, my husband reminded me that he was the one who told me it was a Monarch butterfly, so I guess we both need to learn more.  Now I want to purchase a butterfly and a bird book -- maybe a flower book -- so I will be better informed!
However, Tiger Swallow Tail butterflies go through the same stages of life as the Monarch -- four stages during one life cycle and four generations in year.  Does that sound confusing?  Well, it is -- at least it is to me.  The four stages are the egg, the larvae (caterpillar),
the pupa and the adult butterfly.  The final generation comes out of hibernation to find a mate, usually in February or March.  They then migrate north and east to find a place to lay their eggs.  This starts stage one and generation one of the butterfly.
In March and April, the eggs are laid on milkweed plants and hatch into baby caterpillars.  It takes about four days for the eggs to hatch.  The baby caterpillar doesn't do much more than eat the milkweed in order to grow.  Approximately two weeks later, the caterpillar is fully-grown and finds a place to attach itself so it can start the next process -- that of metamorphosis.  It will attach itself to a stem or a leaf using silk and will  then transform into a  pupa. The ten days of the pupa phase is really a time of rapid change.  During that time,  the old body parts of the caterpillar undergo a remarkable transformation to become a beautiful butterfly.  The  butterfly will emerge from the pupa and fly away, feeding on flowers and enjoy the short life it has -- usually two to six weeks.  This first generation will then die after laying eggs for generation number two.
This is the stage I saw yesterday as the butterfly flitted from one wild flower to another: 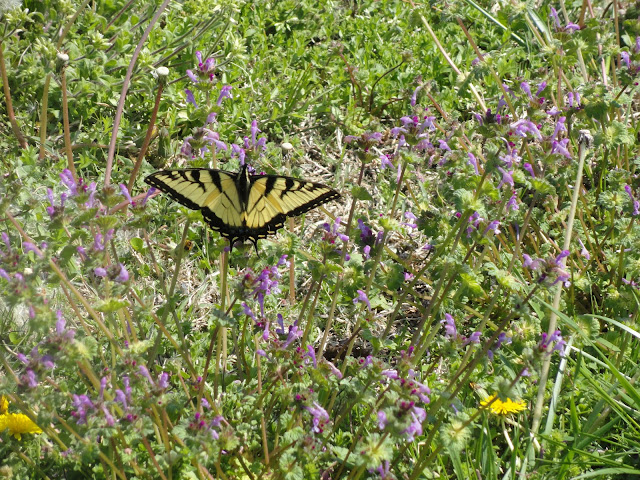 The second generation of is born in May and June and the third generation will be born in July and August.  These butterflies will go through the same four stage life cycle as the first generation, dying two to six weeks after it becomes a beautiful butterfly.  The fourth generation is born in September and October and goes through the same process as the first three generations, except for one part.  The fourth generation does not die after two to six weeks.  Instead, this generation migrates to warmer climates, like Mexico and California, and will live six to eight months until it's time to start the whole process over again.  It is amazing how the four generations work out so the butterfly population can continue to live throughout the years, but not become overpopulated.  God's creation -- there's just not anything quite like it.
New apartment building waiting for the Martins to move in! 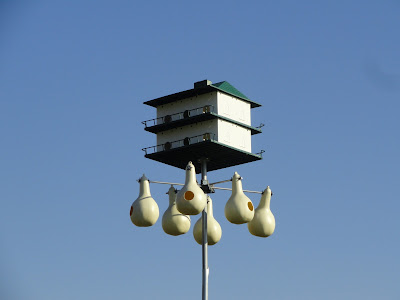 Has anyone seen my Mama? 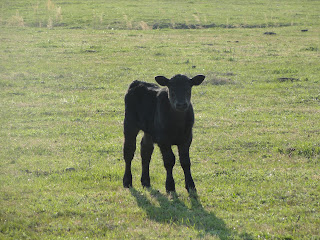 I have a few more pics but am having probs loading them -- just very slow Internet connection, so I am ending this for now.
Thanks for stopping by.  Now go out there and live each day to the fullest -- as tho it is your last.  And may God bless our family and friends everywhere!
Posted by Alan and Marilyn McMillan at 10:56 PM