Welcome to Mike Mills.  Take a few minutes and check out Mike and Sandy's blog "Phannie and Mae" at http://mills-travels.blogspot.com.  I've had a brain dump since my last posting and cannot remember how to link their blog to this post.  I know someone out there will remind me.  In the meantime, check them out!


Also, my dear friend, Peggy, does not have a blog per se, but she does have an awesome website -- check it out at http://www.rv-living-unlimited.com/.  You will find a ton of valuable information there.


WOW -- we have been soooo busy since we arrived in Little Rock on September 16  -- three weeks tomorrow.  Time does not stand still!  If you remember, we had probs with our MH slides and dumping hydraulic fluid.  On Monday, the 19th, we were up early and drove 30-45 minutes to River City RV where they made a new hydraulic hose and had us on our way in a few hours.


The following day, the 20th, I had a doc appointment for the dreaded yearly mammogram.  After spending several hours getting several mammograms and an ultrasound, the radiologist reminded me of an area in my right breast we had been watching since '08 -- he said there were changes in the area.  AND in addition, I had a new area in my left breast.  In light of this, he suggested I have each area biopsied.  I left his office and went directly upstairs where I saw Dr Hagans -- a surgeon who specializes in breasts only...boobs is all he does.  I have been seeing Dr Hagans for 15+ years and trust him explicitly.  I was ushered right into a room where Dr Hagans told me we could biopsy both areas, OR he could just remove the masses.  I quickly opted to proceed with lumpectomies.  My entire thought process was why have a biopsy and maybe have to return for lumpectomies.  I had the worse mammo last year in North Carolina -- they are not pleasant by any means, but I came out of that office in tears and told my husband I would be returning to Dr Hagans this year and I am so thankful I did.  Because I am on an aspirin regimen for my heart, I had to wait at least a week for the surgery.


In the meantime, we were busy-busy seeing and visiting with friends and family and eating, eating, eating!  We had dinner with Lisa and Tyrone at Texas Roadhouse. 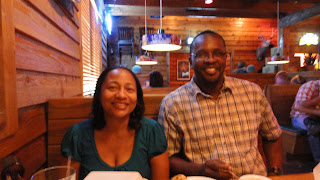 I worked with Lisa at Little Rock AFB -- she was active duty and I was the court reporter.  She is now retired from the USAF and works for the VA.


We had dinner the night we arrived in Little Rock with my brother and sister-in-law -- Jerry and Suzanne.  Unfortunately, I forgot to take a pic:(  I will get one before we leave here!


We had dinner with Mary Beth and Don as well, but no pic of that -- HOWEVER, a pic of these two are on the way.  Mary Beth and I have been friends since the 5th grade and Don came into the picture in junior high school.  We have been very dear friends for many years.


On Monday, the 26th, we visited with my friend, Clara, and her husband, Michael.  Clara and I have been friends also since the 5th grade.  She also visited us in Branson. 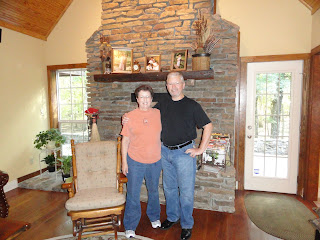 They have a beautiful home on 40 acres. 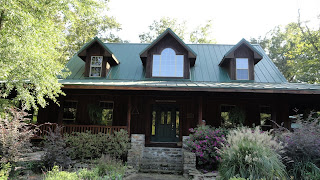 Michael took Alan for a ride around their property. 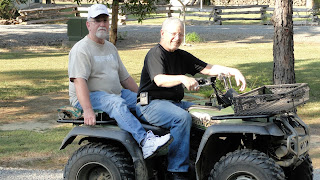 Michael has a green thumb and did all the landscaping. 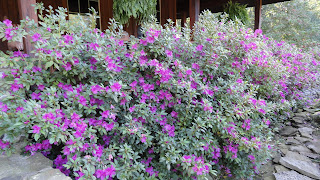 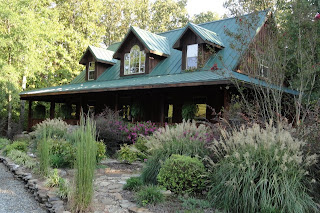 Make new friends but keep the old
Those are silver but these are gold! 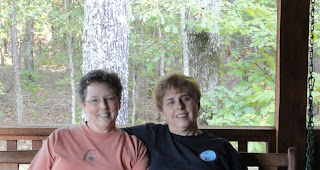 We made plans with our friends Don and Mary Beth to come to the park on Tuesday night (the 27th) to see our MH and to sit by the  campfire and visit.  I was excited when I discovered on Tuesday morning that Johnny and wife Karen were parked across the street from us.  Neither knew the other one was here 'til I saw Johnny walking his dog and stepped out to greet them.  Johnny has been a dear friend since junior high school, as well and he is also a close friend of Don and Mary Beth's.  Since Mary Beth and Don were coming over Tuesday night, of course, we invited Johnny and Karen to join us.  And I got pics this time! 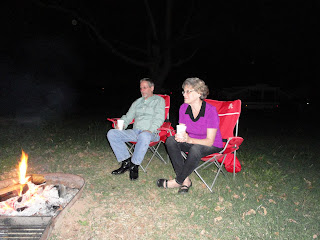 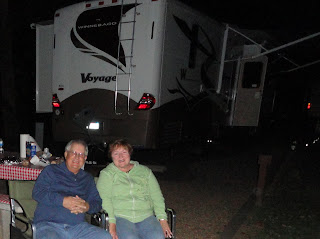 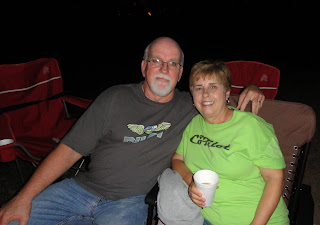 We are so blessed with great friends.

Our view of the river -- this really is a pic we took from our campsite...Awesome! 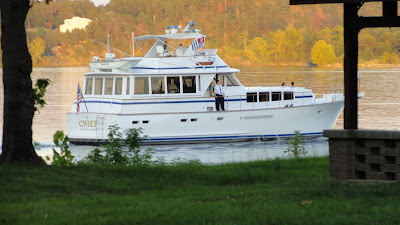 On Thursday morning, we said goodbye to Johnny and Karen as they headed back to their home in Kimberling City, Missouri, near Branson. 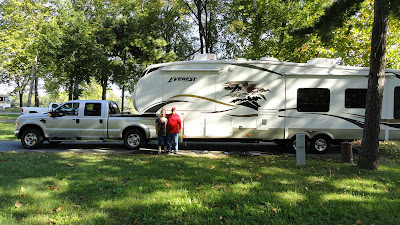 And that very afternoon we said hello to Peggy and Ken 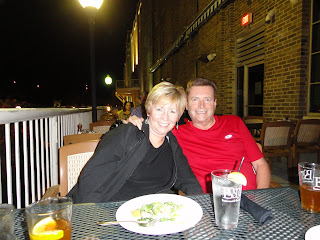 Peggy and Ken are fellow workampers in Branson on their way home to Texas.  Thank goodness they stopped by.  After escorting them to the park, our car would not start -- dead as a door nail!  We just bought the battery in North Carolina last December and it had a three-year warranty.  Ken jumped it and Alan tried charging it, but it didn't work, so we were off to find an Advance Auto to exchange it.  At the first Advance Auto, we learned the battery was already two years old when we purchased it last December and the only battery like it on their shelf was a 2009, already two years old.  The manager called around until he found one two months old, but it was across town.  Thank goodness Peggy and Ken were here to cart us all over town to find a battery!  They were tired and hungry by the time we made it to Bosco's in the River Market for dinner.


On Friday morning (the 30th), we were off to the outpatient surgery clinic.  Although I was somewhat nervous, I  had great confidence in my doctor.  Like I stated earlier, I have been a patient of Dr Hagan's for over 15 years and I trust him 1000%.  I tried to get him to tell me his opinion -- he has seen thousands of boobs and thousands of cancers, so I felt like he knew and tried to convince him he should tell me.  However, he said he would talk to my family after the procedure.  Without going into too much detail, I finally got the results yesterday -- mass in right breast was benign, but the left breast was cancer.  HOWEVER, it was very small, 1.3 cm, grade 1, non-aggressive, completely removed with no cancer cells outside the tumor.  As one friend, who has breast cancer, said, "It's the best news you could get and still have cancer."  I will have additional tests next Tuesday to see if there is any cancer in my body.  Later that afternoon, we will sit down with Dr Hagans and he will go over all the reports and determine if treatment is needed.  I am VERY thankful I came back to see Dr Hagans and feel God led me here for that reason to see him.  The c word is scary for all of us, but it was found early and I am convinced my prognosis is GREAT!!
I have more to share about our visit with Peggy and Ken, as well as others, that I will post next time.  Thank goodness for friends and family -- my brother and sister-in-law have been very supportive as well, showering us with homemade goodies like quiche lorraine, chicken tortilla soup and an apple crisp to die for.  We are truly blessed!


Tomorrow we have fellow-bloggers, Jim and Gayle, coming to the park for the weekend, so stay tuned -- there's more to come.


Posted by Alan and Marilyn McMillan at 4:39 PM