Yesterday, we took a little car trip to Fayetteville, North Carolina.  From reading various blogs and forums, we learned about the Norcold recall.  We have not received anything from Norcold to indicate our fridge was on the recall list, but after checking with Norcold's website, we learned it is on the list.  Also, our entry door steps will not stay locked in the stowed position because the gear is stripped. Since we have an extended warranty on our Motorhome with Route 66, Hawley's RV in Fayetteville was the closest Route 66 dealership.  We wanted to check it out before we  allowed them to work on our Motorhome.  Fayetteville is approximately 90 miles from where we are parked in Nashville.
It was a beautiful, blue-sky kind of day.  The Bradford pear trees were in full bloom and aligned the streets of the smaller towns we drove through. 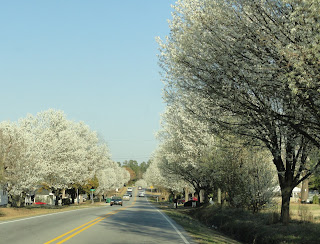 After visiting with the Service Manager at Hawley's RV, we were satisfied he was well versed in the Norcold recalls and he ordered the recall kit.  When the kit arrives next week, we will make an appointment to have it installed, and John will also check out our steps and order what is needed to repair those.  Like some have done, we would like to replace our Norcold with a residential fridge, but do not feel it is financially feasible to do so now, but perhaps in the future.  Thank goodness the steps are covered under our extended warranty because to replace the steps would cost around $1700, plus labor.
Leaving Hawley's, we headed to Pope AFB, which is located 12 miles Northwest of Fayetteville's business district.  When we first saw this sign, we were like, what is "Pope AAF?" 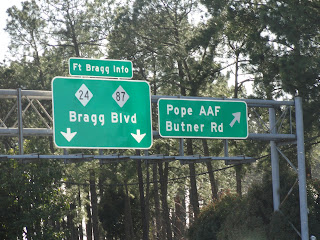 Then we learned that in accordance with the 2005 Defense Base Closure and Realignment Commission (BRAC), as of Tuesday, 1 March, Pope AFB became part of Fort Bragg and assumed the name it held before becoming a United States Air Force base -- that is -- Pope Field.  Pope was Fort  Bragg's Army Airfield from World War I to World War II, thus "Pope AAF." 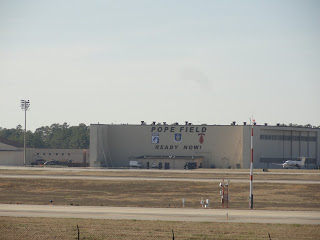 I knew when I was still working at Little Rock AFB that Little Rock was acquiring Pope's C-130s but had forgotten that eventually there would be no Pope Air Force Base, as it was known then. The few active-duty airmen who remain at the base will be responsible for operating "Green Ramp," where Fort Bragg paratroopers board airplanes.  The Air Force Reserve's 440th Airlift Group will operate the airfield and a wing of 16 C-130H2 cargo airplanes.  The gates that separated Fort Bragg and Pope AFB no longer exist.
Just past what used to be Pope AFB's entrance gate is the normal static display of various AF planes. 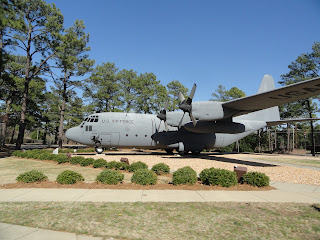 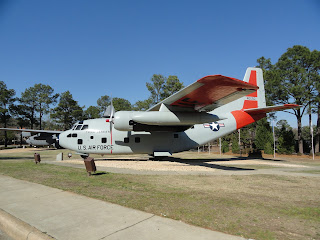 We were a little surprised  when we pulled up at a stoplight on base behind this truck: 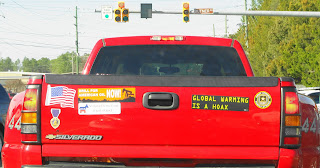 Why you ask?  The fact that both the driver and passenger in this truck were Army soldiers and were obviously expressing their open political opinion in this way on a military installation.  Having worked for the military, as well as being a military spouse, it was well known that we were not to express our political opinions in any open forum,  to include bumper stickers on our vehicle.   If you  look really close, one sticker says, "Voting Democrat is just Stupid."    It's right under the sticker that says, " Drill for American Oil NOW!"     I didn't want to expose the license plate but to the left of it was a sticker that simply said, "Palin."  Maybe times have changed since I retired in 2008 and it's okay to now express such an open opinion on a military installation -- or maybe it's allowed in the Army.  With their opinions, we couldn't help but wonder what these soldiers thought about obeying the orders of the current Commander-in-Chief.
Another political statement of some kind we became aware of is this gas station in Rocky Mount, just down the road from Nashville. 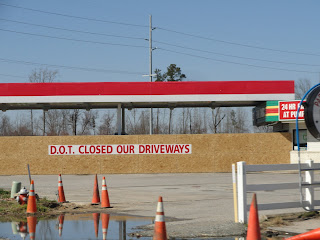 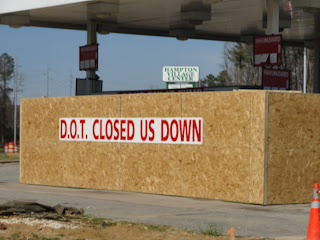 We have no idea what the story behind this is -- maybe we'll find out.  We do know there is road construction in the area and perhaps somehow it's related.
We are hanging in with our no-meat regimen -- however, I did cheat a little and had some turkey bacon with my pancakes at Denny's.  We read we should lose weight not eating meat and we should save money on food.  So far, neither of those have happened -- I haven't lost any more than the five pounds I had originally lost and Alan hasn't lost any more than his original ten pounds.  And we haven't seen much difference in the grocery bill, but maybe that's because the price of food -- along with gas -- just continues to rise.  Anyway, we will continue to press on meatless -- for now.
That's it for now.  As always, may God continue to bless our voyage, as well as our family and friends, near and far.
Posted by Alan and Marilyn McMillan at 5:47 PM