Friday we visited the Airborne and Special Operations Museum in Fayetteville, North Carolina.  It took us a couple of trips around the block before we found the parking lot -- there was street construction around the parking area which made it difficult to find.  There is no entrance fee for the museum, but there is a fee for a short movie and a simulator ride.


Fort Bragg in Fayetteville is the home of the 82nd Airborne  Division and the XVIII Airborne Corps.  The world famous Golden Knights (The Army's Parachute Team) also call Fort Bragg home.
Meet Iron Mike who stands guard at the entrance to the Museum.

The term "Iron Mike" is American slang used to refer to men who are especially tough, brave and inspiring.  Because the use of the slang term was popular in the first half of the 20th century, many statutes from that period acquired the Iron Mike nickname.  This particular Airborne Trooper is the newest Iron Mike statute and was placed in front of the Museum on June 14, 2010.   The statute depicts a World War II-era Airborne Trooper with a Thompson machine gun and stands 16' 4" and weighs 3,235 pounds.
The inscription on Iron Mike's plaque states:
"Iron Mike stands in honor of Airborne Troopers
whose courage,  dedication  and traditions  make
them the world's finest fighting soldiers."


These paratroopers are hanging just inside the Museum's doors. 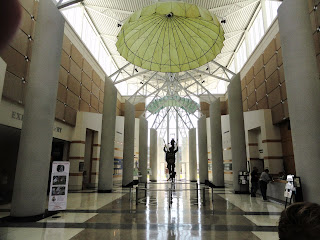 We continue to find military museums uniquely designed, informative and well presented. One aspect I found interesting was the repair and packing of parachutes.  The parachute is stretched out on a long table and folded and packed in the small pouch at the end of the table. 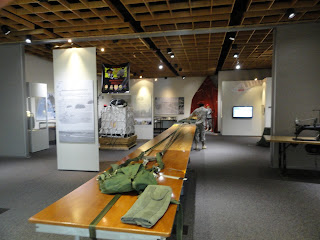 Those who repair parachutes are known as "Riggers." 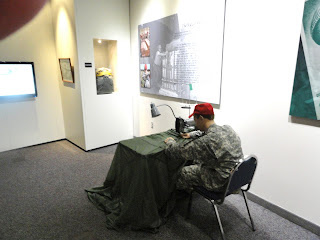 The red baseball cap is a signature piece of  the rigger's  uniform and immediately identifies a troop as a rigger.
Their job is very important as depicted in their pledge: 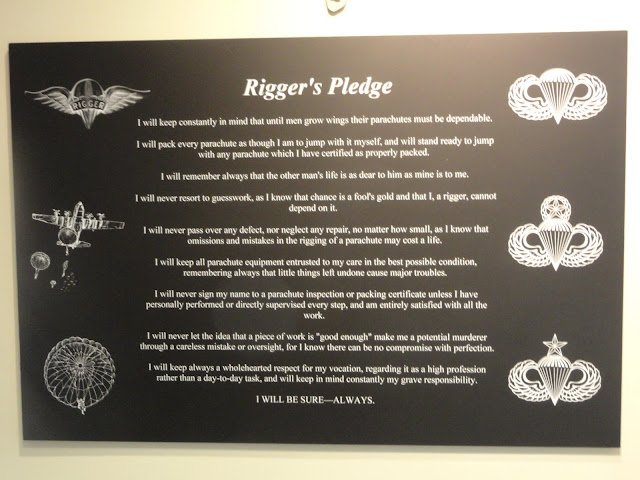 During WWII, a detachment of Women's Army Corps (WACs) served at the Parachute Training School in Ft Benning, Georgia.  WACs were put through strenuous training before they became certified riggers.  In the five weeks of parachute school, the women learned the fundamentals of packing, how to sew parachutes by machine and hand, how to pack trays and mend harnesses, how to repair canopies and finally how to pack all kinds of parachutes.  However, the women were not allowed to be paratroopers.  On Graduation Day, a WAC packed twelve parachutes and went with twelve paratroopers making a jump.  If one parachute failed to open properly, she would not earn her rigger wings.  They thought women with textile mill training would make good parachute riggers, but nearly 40% of those women failed to complete the training.  On average, a WAC could rig six parachutes a day, compared to men who rigged ten a day.  As the Corps better understood who made better riggers and picked more suitable women, the WACs became more proficient and eventually were considered equally qualified with their male counterparts.  One hundred fifty-thousand women served in the WAC during WWII.
Another story I found interesting was the one about the wedding dress.  As the story goes, the year was 1943 and a young paratrooper was in training with the 101st Airborne Division.  He and two other friends went in together and purchased a car so they could "socialize" with the local girls.   It was during one of those dates when Eugene Deibler met Mary Smith and he knew she was "the one."  Following his training, Sergeant Deibler shipped out to Great Britain.  In the early morning of June 6, 1944, he was part of the airborne assault on Normandy.  The unit landed in a field near the German headquarters.  Sergeant Deibler said he doesn't know why he did it, but he took out his knife and cut out half of his unused reserve silk parachute canopy and stored it in his knapsack.  He kept it there through 76 days of combat.  At the first opportunity, he mailed the material back to Mary.  She took the silk from the parachute, put it with a little more material and with the help of a seamstress, they made her wedding dress.  Mary kept it ready until the two were wed on December 22, 1945.  Now, that's a love story! 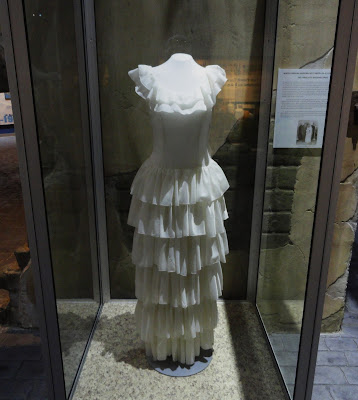 One more story before I end this post.  By December 22, 1944, during the Battle of the Bulge, the German offensive had surrounded the town of Bastogne, Belgium.  Inside the town, General Anthony McAuliffe commanded the 101st Airborne Division.  That morning a German contingent approached the 101st under a flag of truce and handed a surrender ultimatum, stating the battalions were ready to annihilate the US troops.  The note demanded a surrender within two hours or shelling would begin.  The note was presented to General McAuliff, whose response was -- "Awe Nuts!"

This was the entire content of the note delivered to the Germans by Colonel Joseph Harper:

A few moments later, Colonel Harper made sure the note was clear.  "If you don't know what 'nuts' means, in plain English, it is the same as 'Go to Hell.'"  That night the Germans began a four-night bombing assault against the town; and on December 26, 1944, after a ten-day siege, American tanks from General George Patton's Third Army lifted the siege of Bastogne.

Alan loves watching old military and western movies.  He actually watched the movie "Battle of the Bulge," starring Henry Fonda and knew all about this particular scene.  Guess I need to watch more movies with him, so I can learn more history.

A few more pictures from the Airborne and Special Operations Museum. 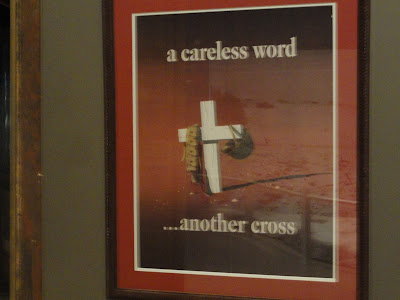 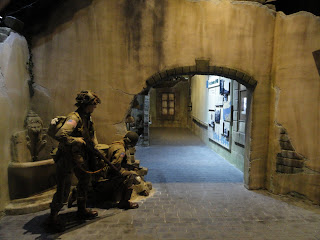 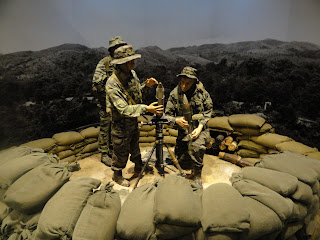 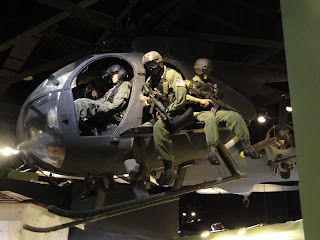 As we exited the museum, there were numerous memorial squares on the sidewalk.  This one honored members of one family who has served. 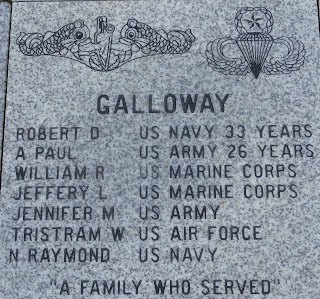 As I close this post, I leave you with this message: 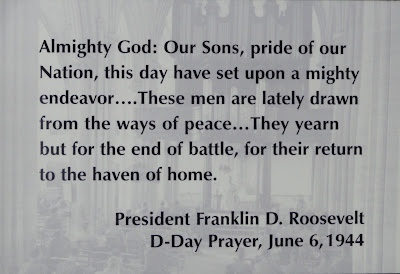 Posted by Alan and Marilyn McMillan at 6:43 PM