We had one more stop to make before we reached South Dakota.  We wanted something near the highway, so we could just hop off and back on, on Monday morning.  So, we pulled into the "On-Ur-Wa RV Park" -- catchy name -- in Onawa, IA.  There are 34 RV sites and it is a Good Sam park -- a little pricey for one night -- $29 for full hookups, plus a 10% discount as a Good Sam member.  Along with registration comes free WiFi service and there is a laundry facility, with restrooms/showers.   The owner directs everyone to their site -- in fact, we  saw her in her housecoat with a flashlight directing someone to their site way after  dark.  They too have had a lot of rain -- 9" the owner told us over several days -- but Sunday was a beautiful, cool day.  We were the first of several to arrive at the park, so she put us in site 1 -- right next to this huge tree. 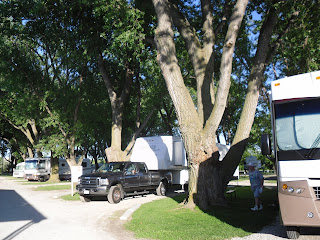 There was something about that tree that reminded me of a movie where the tree talked.  I'm sure it's a kid's movie, but could not for the life of me think of the name.  Don't you see a face in this tree...perhaps a nose? 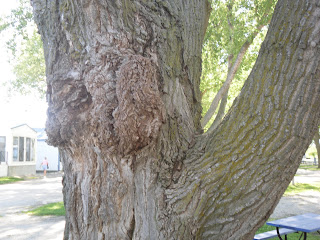 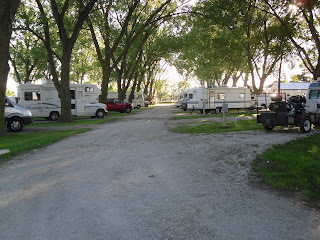 We left fairly early Monday morning heading to Mitchell, SD, where we would stay through the 4th of July.  Because we must return to IL after the 4th, we would not see West South Dakota on this trip.  We saw more rolling, green hills and pastures and more corn on our drive from Onawa, IA to Mitchell, SD. 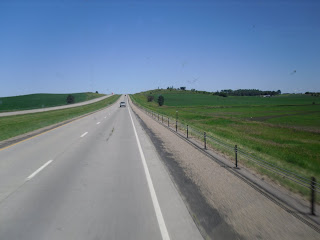 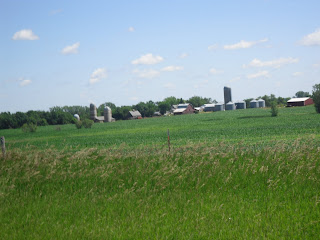 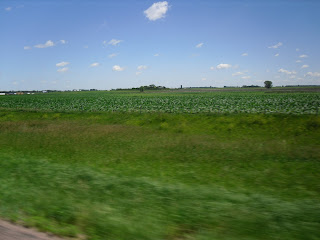 We had reservations at the RandR Campground in Mitchell.  RandR is another Passport America park, so for eight nights, we paid $147.56, an average of $18 and some change, per night for full hookups, including free internet and cable TV.  There is only a total of 40 RV sites, mostly pull-throughs, and they can accommodate RVs up to 90'.   Most of the sites are shady.  We were a little disappointed when we were told we would have to park in one of the back-in sites, as they wanted to save the pull-throughs for those stopping in for one-two nights, but we understood.  Unfortunately, we were backed up to I-90, but as it turned out, it was best for satellite and with a fan at night, we never heard I-90.
Not very attractive with the big 'ole billboard next to us:( 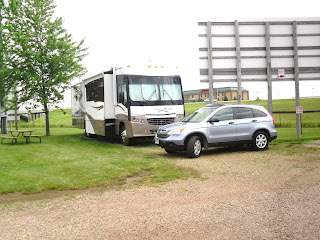 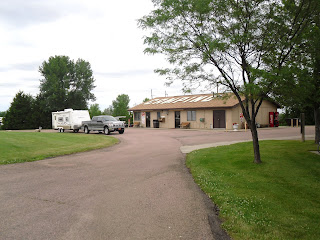 The office with bathrooms/showers in the back. 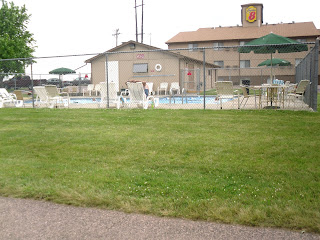 Swimming pool with showers/bathrooms.
Our Neighbors 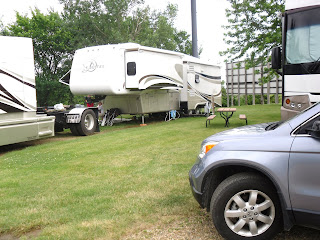 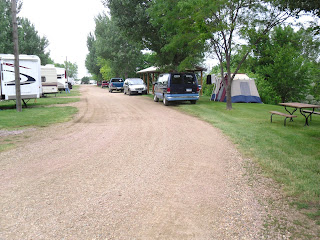 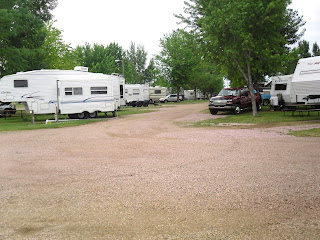 We even saw another Voyage in the park with the same color scheme as ours. 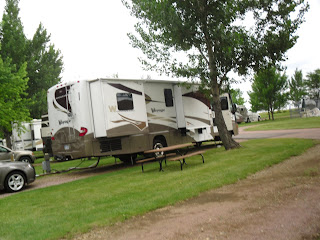 For those not familiar with Passport America, it is the world's largest 50% discount club and the $44 we paid for a years membership has paid for itself several times already on this trip.
One of the main reasons for our trip to South Dakota was to finalize our status as full-time RV'ers.  We had already registered our car and motorhome in South Dakota, but we actually had to travel here to obtain our drivers' license and register to vote.  So, on Tuesday, June 29, we drove to Madison, SD, approximately one hour from Mitchell, and our hometown where we receive our mail through "MyDakotaAddress."
MyDakotaAddress is in the building to the left of the construction area. 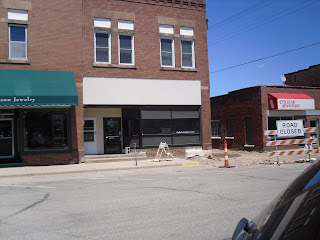 Madison is the county seat of Lake County and in the 2000 census had a population of 6,540.  It will be interesting to see what the 2010 census shows.  Madison is home to Dakota State University.
In order to obtain our drivers' license, we had to have the proper paperwork, which is  a requirement of immigration laws.  We had to prove who we are and where we come from.  Not only did we have to surrender our Arkansas drivers' license, but we also had to show our social security card -- no plastic cards, only the original paper card; certified birth certificates -- no hospital/church record will do; certified marriage license -- for every marriage you've had; and we had to submit proof we had spent at least one night in the state.  We didn't complain about all the necessary paperwork...we were thankful we had it all.  One person waiting didn't have his social security card and had to produce a 1099, which he did have.  Only one lady was working to produce the many drivers' licenses on Tuesday and we waited over an hour for "our turn."  We will have to return to South Dakota in five years to renew our drivers' license.
We stopped by the courthouse to renew our tags.  Vehicle tags are renewed according to your last name -- ours being the letter "M," meant our tags are renewable in July.  Because we had received the renewal notice in the mail, it only took a short few minutes to renew and we are good until July 2011.  We will renew next year through the mail.
Lake County Courthouse 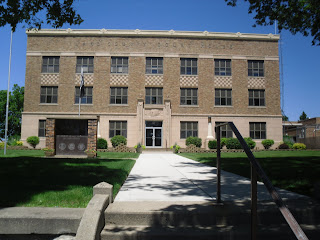 With our new drivers' license in hand and our vehicle tags renewed, we set out to see Madison.  We found the First Baptist Church, which was established in 1880.  From the appearance of the outside of the building, we doubted the church had changed much in 130 years. 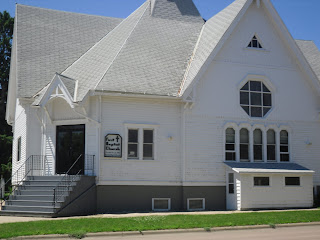 We found the little town of Madison to be clean and neat, with manicured lawns and beautiful flowers. 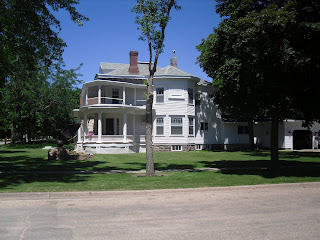 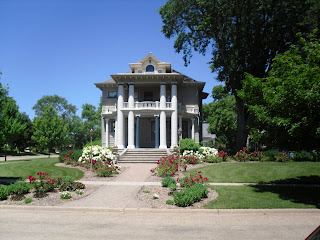 On our drive back to Mitchell, we got behind this truck -- MBM from Rocky Mount, NC.  That's where our daughter, Alissa, works in MBM's home office.  He was definitely a long way from home.  This one's for you, Alissa:) 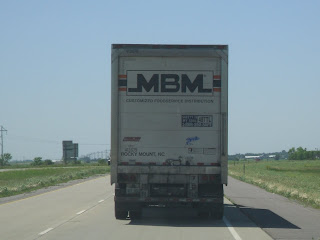 As I write this, today is the 4th of July.  We are reminded of what freedom means and how grateful we are to be American citizens.  We are also thankful for the many men and women who continue to ensure our freedom by the many sacrifices they make -- some, the ultimate sacrifice.  May we never forget what these men and women have done for each of us.
Be sure and check back soon to see what we find in Mitchell and the surrounding area.  We are working on a map of our travels -- we will eventually get it figured out -- I hope.
God bless our voyage and God bless our family and friends.
Posted by Alan and Marilyn McMillan at 5:59 PM