Bloomington, IL via Crawfordsville, IN

Early Monday morning, June 21, we continued west.  As I mentioned in a previous posting, our coach AC died while at Wright-Patt AFB, OH.  We have a five-year extended warranty with Route 66 RV Centers, provided by the dealership when we purchased our motorhome.  I called various centers along our path to SD, but everyone I called said they were too busy to even look at our AC.  I even called Winnebago's Customer Service and was told they were booked with appointments 'til sometime in August.  I found one center in Cincinnati that didn't answer the phone, so we decided if we showed up there bright and early on Monday morning, surely they would see us.  WRONG...they said they were "slammed today," when we inquired as to whether they could/would help us.  So, we kept moving. and I kept calling.  Finally, one Route 66 RV Center suggested I contact Cummins in Bloomington, IL -- this was late Monday afternoon, so I did.  Chris at Cummins answered the phone and said -- SURE, come on in tomorrow.  YEAH, finally, someone who was willing to at least take a look.
We stopped for the night at Sugar Creek Campground in Crawfordsville, Indiana.  Sugar Creek is a Passport America campground, so $12.50 plus tax for full hookups was a real deal.  The first site the lady sent us to was in the trees, so we asked if we could change and we did -- site 12 I believe, which was a pull-through so we wouldn't have to unhook the car. 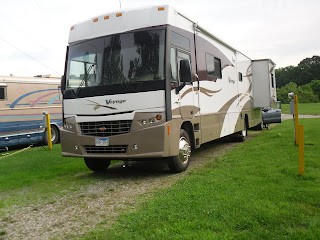 There are 64 graveled RV sites. 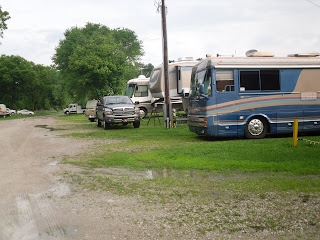 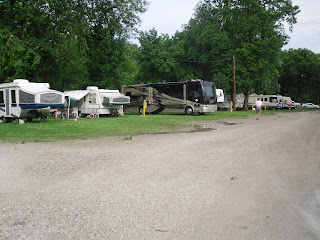 It was obvious they had had rain.  They also rent canoes, but the owner stated there had been so much rain, the water was too high. for canoeing.  We settled in, watched a little TV and went to bed.  We have a weather alert radio that went off around midnight -- there was severe weather in the area.  And boy, did it rain -- it rained hard not once, not twice, but three times during the night.  And that weather radio kept going off and we lost power for about four hours.  By three o'clock in the morning, I was ready to go.  Since the incident in Arkansas at the campground where the Little Missouri River rose ten feet in twenty minutes, I was concerned about Sugar Creek.  Neither one of us got much sleep.
When day-light finally came, we surveyed the area.  The storms had taken down limbs, trees and even a power line. 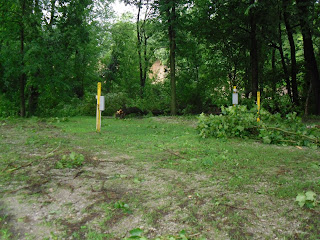 And Sugar Creek was up over the bank. 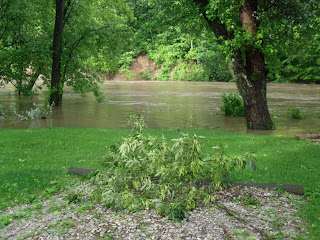 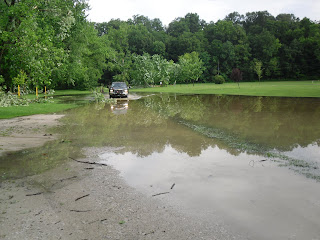 Needless to say, we got ready and left pretty quickly, as did others.
We arrived at Cummins-Crosspoint in Bloomington, IL, around 10:00. 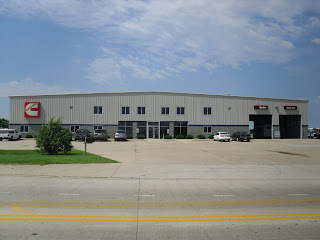 Cummins-Crosspoint is one of the largest distributors of Cummins engines, parts and service in the world.   We would expect Cummins to work on Cummins engines but not EVERYTHING that pertains to an RV.   We soon found out they are a Coach-Care facility and we are now members of the Cummins family.  They were so busy, but we were thankful they were willing to fit us in.  It took most of the afternoon , but as it turned out, the AC motor was frozen. 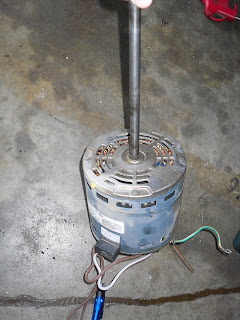 Our motorhome has basement air.  They ordered a new one and we were told it would arrive on Thursday morning.
Cummins-Crosspoint's customer service was superb.  They moved our motorhome outside and hooked us up to 50 amp with access to water and sewer. 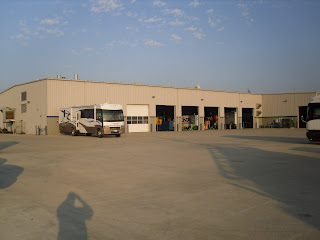 We had fans and it actually wasn't too bad -- at night we had a good breeze through the windows.  So now all we had to do was wait.  Cummins has twelve bays.  They have a shift that comes in at 3:30 and works until midnight, in addition to the crew who works during the day from 7:00 to 3:30.  There were motorhomes and trucks sitting around in various stages of repair. 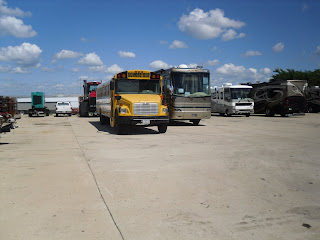 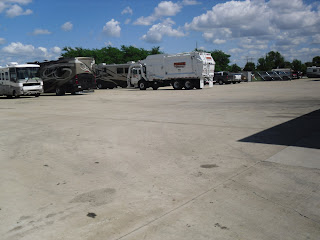 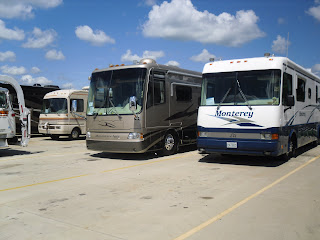 Cummins has two separate areas for RV customers to wait -- both with TVs. 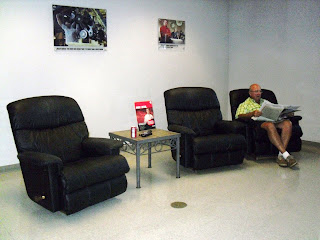 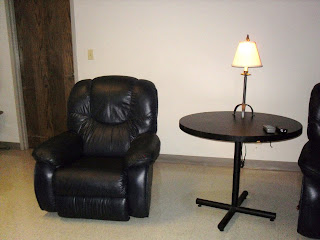 We waited -- we went to the mall, we caught up on laundry -- Alan even did some minor maintenance: 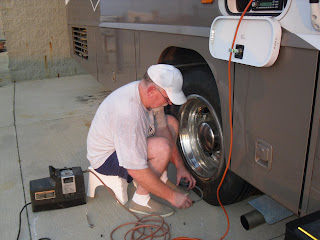 Late Tuesday, I remembered a friend had moved to Illinois and I wasn't sure but I thought it was Bloomington.  I jumped on Facebook and sure enough...Tara was right down the road.  I called her and we met for dinner on Wednesday night. 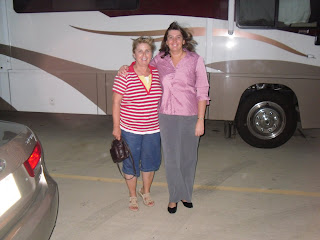 After dinner, Tara drove us to see the windmill farm -- Twin Groves -- among the corn fields,  a few miles East of Bloomington. 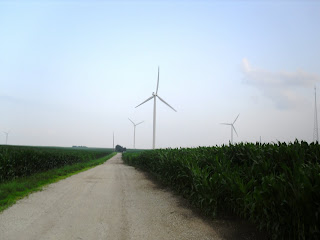 There are 214 operating turbines.  Each turbine stands 214' and has three 85' long blades.  They cover 22,000 acres at a cost of $700 million.  The site produces power to about 120,000 homes and is the largest utility wind farm east of the Mississippi River.
I first met Tara when she arrived at Little Rock AFB as a young Airman right out of Paralegal School in 1995.  It was great seeing her again.
By Thursday, we were getting a little weary, but the guys were working so hard we couldn't complain.  Our motor arrived before noon on Thursday, but it was 5:00 before they were able to get to us.  They put the AC back together and put it back in the motorhome. 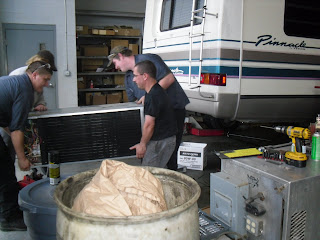 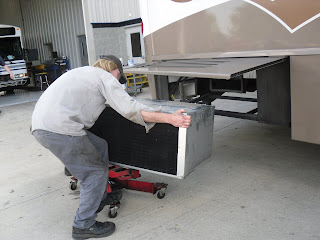 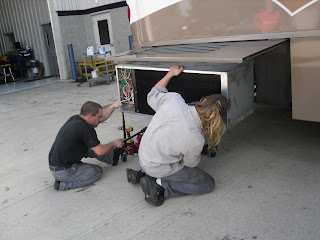 Kevin (rt) and Rick (lt) were the two who worked on our motorhome.  By this time, it was after six o'clock on Thursday evening -- which means they had been working since seven that morning.  We appreciated all their hard work and dedication to get us back on the road.  However, to everyone's dismay, they discovered that one of the two compressors was bad.  They had worked so hard and we were  ready to get back on the road, but it was something that couldn't be helped.
The good news is the AC was still under warranty.  So, we had to wait until Friday morning so Rick could contact the manufacturer to see what they wanted to do.  He thought they would replace the entire unit, but no, they only want to replace the compressor, but it would be mid-week of the following week -- the week of June 28th -- before they would receive the compressor.  We really needed to get to South Dakota and get our drivers' license and renew our tags, so we decided we would leave and come back the week after July 4th.  As bad as we hate to "backtrack," we definitely did not want to sit around in Bloomington another week -- although we really like the area.  So, we got everything ready and left near 10:00 on Friday morning heading west.
By the way, we are loving our adventure -- our blessed voyage -- even when things break.  It doesn't matter where you live, or what you live in, life happens and we are thankful Cummins was willing to help us.  They welcomed us to the Cummins family and in our travels, if we have other problems, Cummins will be the first place we will check for help.
Check back in a few days to see what we found in Iowa.  In the meantime, may God continue to bless our voyage and may God bless our family and friends.

Posted by Alan and Marilyn McMillan at 11:26 PM