Finding our Way Back to Bloomington,

Hesitantly, we left Clear Lake -- we really enjoyed our time there and hope to go back -- sooner than later. There were more corn, soybean and hay fields as we continued south.
We stopped in Davenport, Iowa, for the night, at the Interstate RV Park.  It was a nice park and although it wasn't far from I-80, we heard no traffic.  It was a little pricey we thought at $36, including a 10% Good Sam discount.  We had a pull-through and the site was kind of ntight.  We had a patio with a picnic table and we are sure if we had sat down at that picnic table, we could've touched our neighbor.  Speaking of our neighbor, they were clowns -- Spangle and Daisy Mae.  Their ministry is "Making the world smile one face at a time." 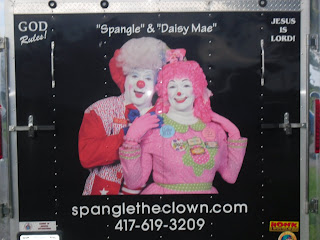 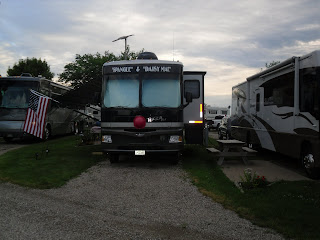 We actually had the honor of meeting Spangle and Daisy Mae as they returned home following entertaining children at a local pizza restaurant.  They were very gracious and allowed me to snap their picture: 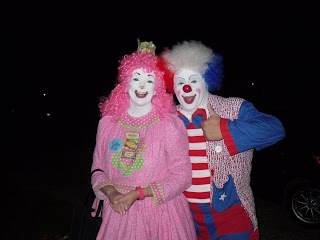 You can find out more about Spangle and Daisy Mae at:   www.spangletheclown.com.

This is the welcome sign at the Interstate RV Park, symbolizing farming in Iowa -- corn and pigs. 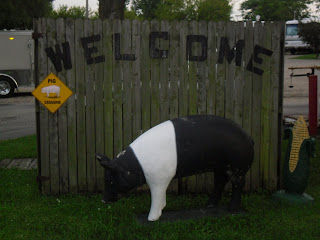 As we strolled through the park, we found this big beautiful weeping willow tree. 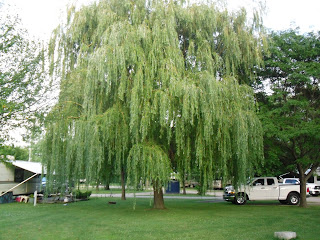 We were up early the next morning, had breakfast and filled the gas tank.  Leaving early, we hoped to stop just short of Bloomington -- in Peoria, Illinois -- and spent both Friday and Saturday nights and then drive in to Bloomington and park at Cummins so we would be there early Monday morning for our appointment.  However, when we arrived at Millpoint RV Park, we were very disappointed.  In fact, we really didn't want
to stay.  When I asked the owner if we could continue down the road and it would lead us out, he responded we would have to back up/turn around because "it's very muddy down there" and we wouldn't be able to get out that way.  Since we had to remove our toad no matter what and Alan had to back the motor home into a site just to turn around, we decided we would stay, but we would leave early Saturday morning.  I didn't feel too safe -- there were a lot of permanents and even though there was no "out," per se, they kept the one road hot going back and forth until after dark.  From the reviews we read on this particular park, we were looking forward to the view of the Illinois River and watching barges,  etc, cruisie the river, but that was not to be.  From where we were parked, we couldn't even see the river.  The owner explained they had had a lot of rain and most of the "good sites" had been washed out.  Of course, he didn't bother to tell us that when I called. 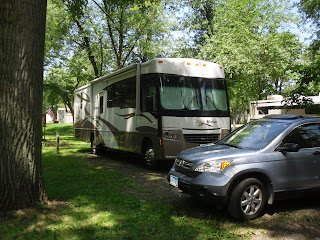 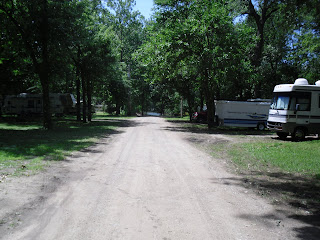 The huge log across the road below is what prevented us from driving around to leave.  It was placed there because of the water and mud. 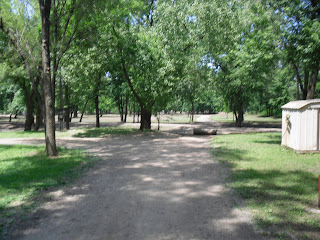 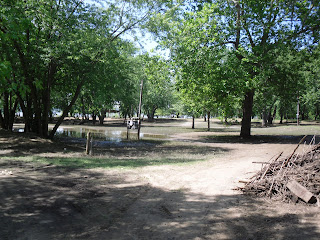 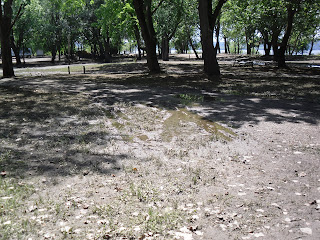 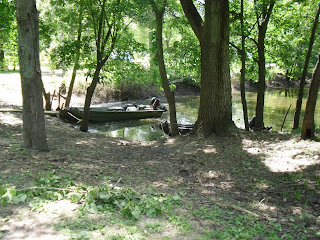 This was our water hookup: 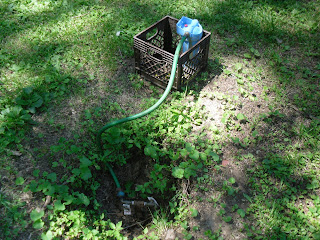 No thanks.
My photographer decided not to memorialize the view out our windshield of the two abandoned camper trailers and the burning trash.  However, I don't think these pictures adequately describe how bad it really was/is.  Even though the water had encroached on the campsites, it didn't appear they were that great before the water flooded the area.
Since there were so many trees, we didn't have satellite, but we settled in and mused ourselves with various activities.  I worked on my blog; Alan worked Sudoku puzzles; I allowed him to beat me in bowling on Wii and we listened to Christian radio.  We survived and learned a lot -- need to do more research and you cannot always believe what you read.
As planned, we were up and out early Saturday morning.  Instead of hooking up the car, I just drove it, since it was a fairly short drive to Bloomington.  In fact, we were surprised how short it was.  We decided to just park at Cummins and we took the last available spot. 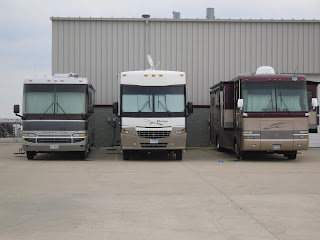 We had lunch at Flat Top Grill with our friend, Tara, and met her husband, Brian, with dessert at the Cold Stone Creamery.  We really enjoyed our visit. 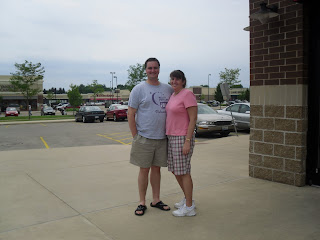 I have a hair appointment on Monday for my first on-the-road trim.  I'm going to Tara's hairdresser.

All in all, I think we are settling into the full-time RV lifestyle.  Monday we start our fifth week on the road and we're still married -- YAY -- but we've had some adjustment along the way.  We've definitely had to learn to relax and "go with the flow."
Please keep my sister, Cheryl, in North Carolina in your prayers.  Lightening struck her home last week -- everyone is safe, but the upstairs of her home sustained quite a bit of damage and it will take 6-8 weeks to repair.  Also, her mother is in the hospital with pneumonia, so prayers are appreciated.

As soon as our AC repair is complete, we will head to Oklahoma to visit with son, Adam (Josh), and family. Granddaughter, Morgan's birthday was yesterday and we can't wait to see her.
As always, we continually ask God to bless our voyage, as well as bless our friends and family.

Posted by Alan and Marilyn McMillan at 10:24 PM