We pulled into the RandR RV Park in Mitchell around 4 in the afternoon of July 23.
Office
﻿
﻿ 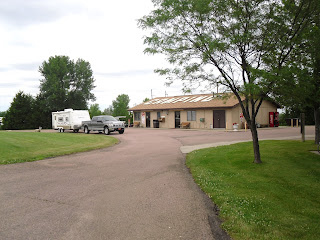 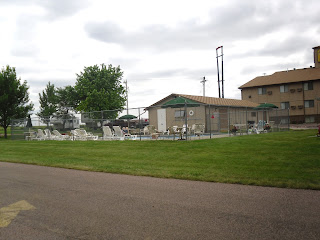 We stayed at this RV park in 2010.  Nothing fancy, but you can use Passport America for 7 night. You don't find that very often.  They do charge $4 for 50 amp, so for four nights, we paid a little less than $23 a night.
Dalton loves animals -- he hunts with his dad, step-brother and his other grandpa, but he doesn't like shooting guns.  Since it was late in the day, the first place we took him was Cabella's.  There is no Cabella's in North Carolina that we have found. 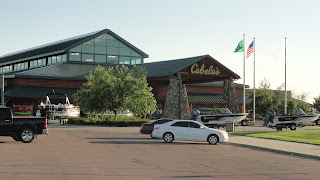 Cabella's sells a large variety of sporting goods, including guns, ammo, fishing equipment and clothing.  But, what we like to see is the display of animals. 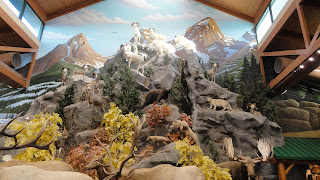 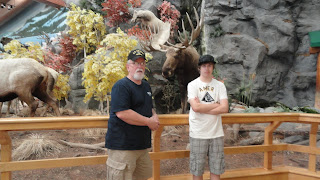 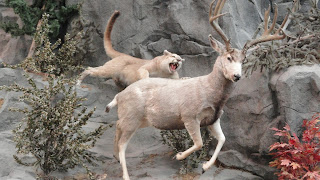 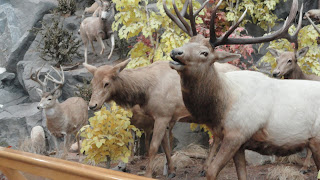 Cabella's also allows RV'ers to stay overnight in their parking lot.
The next day we headed to the Corn Palace.  What's a Corn Palace you ask? 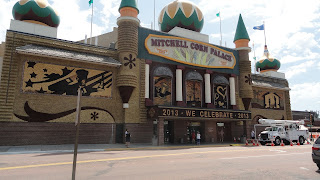 The World's only Corn Palace can  be found in Mitchell, South Dakota, and is an American folk art icon.  The first Corn Palace was built in 1982.  It was a way for the early settlers to display their agricultural bounty in an effort to prove the fertility of the region's soil.  The building is famous for the huge, colorful murals on the front and sides of the building and are redesigned every year.  The 2013 theme is "We Celebrate," depicting various holidays. 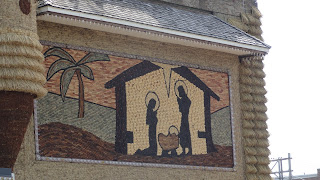 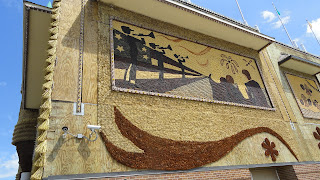 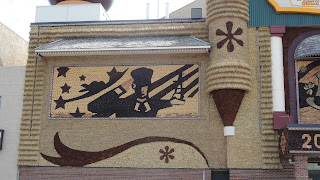 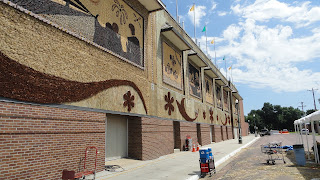 The work is done by hand and it is a delicate  and detailed process.  The border trim of sourdock and rye is cut, tied into bundles and stapled to the building. 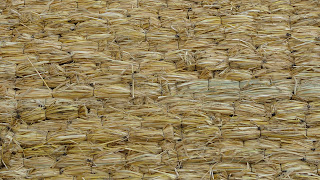 In August, the workers begin to change the murals one by one as sketches created by local artists are transferred to roofing paper and nailed to the mural panels.  These sketches also serve as blueprints, as each color of corn and the area it covers is indicated on the drawing.  Twelve shades of corn are planted in separate fields to maintain color purity and the very best ears are hand-picked by local growers for use on the Corn Palace.  Each ear of corn is then sawed in half, shaped and trimmed to fit the designated spaces and nailed into place.  Roughly 275,000 ears of corn, grown in over 100 acres of land, are used to redecorate the murals each year.  The Corn Palace is the only place in the world where this type of folk art is being preserved.
The building is used for various events throughout the year, such as dances, banquets, sporting events, etc.  In fact, USA Today has named the Corn Palace as one of the Top 10 places to play high school basketball games and called it the Boston Garden of the Midwest.
The best part is high school and college kids are hired each year to pull off the old designs, install the border trim and prepare the building for the new murals.  It gives these young folks something constructive to do with their time during the Summer.  High school and college kids also help with the concessions, tours, etc. inside the Corn Palace. 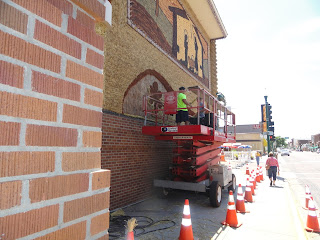 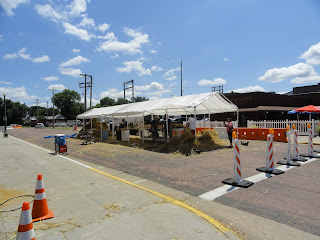 Did I tell you more than you ever wanted to know about a building with corn on the outside?  All the info is provided in case Dalton wants to write a paper on "What I Did This Summer."  HAHA
Foolery Shots
﻿ 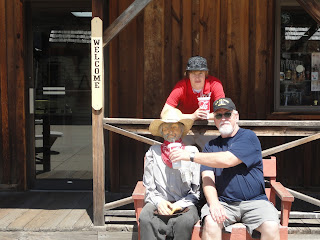 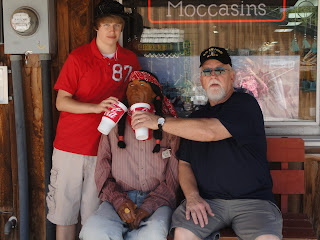 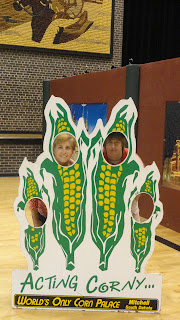 To be continued...stay tuned for what else we found in the area.
Posted by Alan and Marilyn McMillan at 4:43 PM