We drove approximately 170 miles from Utica, Illinois, to Elkhart, Indiana -- just a short 11 miles from Goshen, where the 50th Escapees Escapade was scheduled to begin on Sunday, September 12.  We couldn't move to the Goshen Fairgrounds until Friday, September 10.  The Escapees RV Club is an organization for RV'ers of all kind -- fulltimers, part-timers, etc, but we were told approximately 70% of Escapees are fulltimers.  For more information on the Escapee Club, check out www.escapees.com.
We had reservations at the Elkhart Campground: 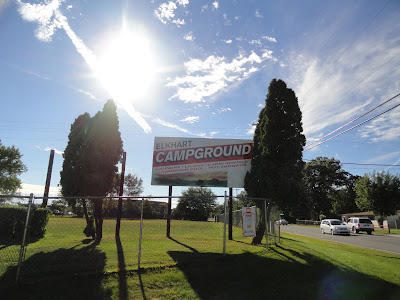 Elkhart Campground is big -- with over 300 sites and appeared to be a KOA once upon a time. 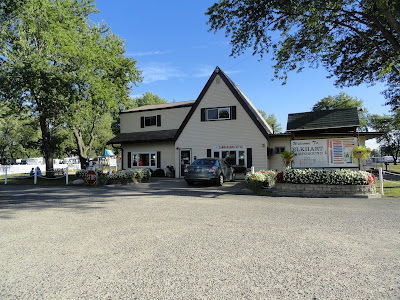 We were parked in a field in the back of the park, but we did have full hookups with 50 amps.  They also give Escapees a 15% discount. 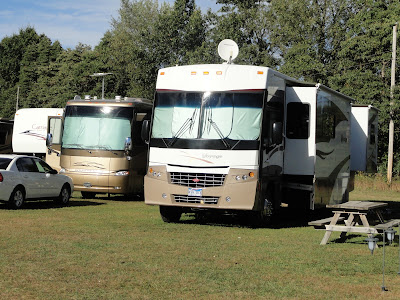 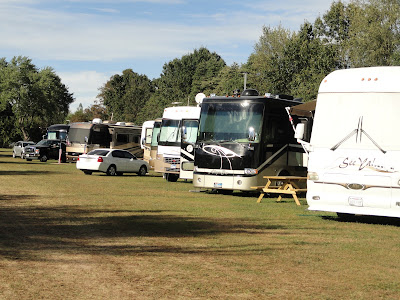 Check out the big satellite on these motorhomes. 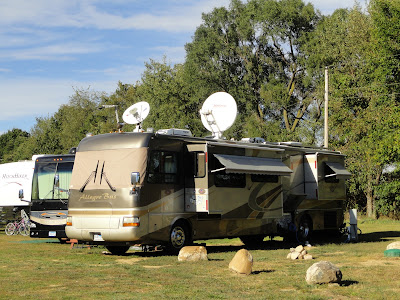 As you can see, this campground was pretty busy. 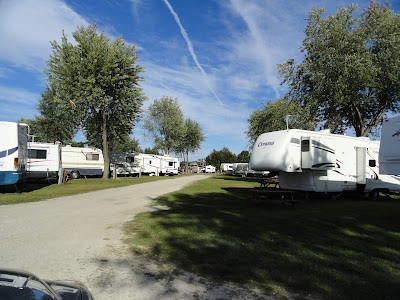 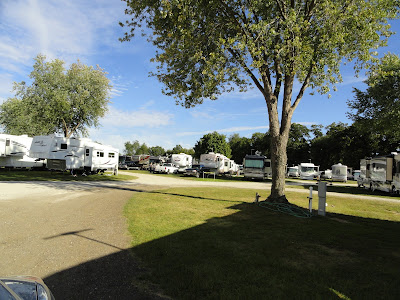 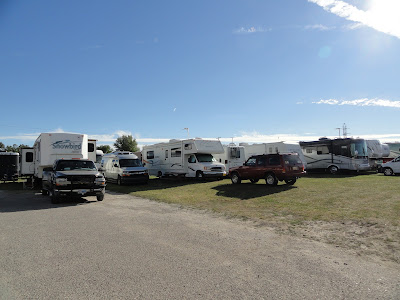 There was a lot of road construction in the area, so we set out to find our way to the Goshen Fairgrounds around the construction, so when we moved the motorhome there on Friday, it would hopefully be an easy drive.  This area has a big Amish-Mennonite population and it wasn't long before we saw our first Amish buggy. 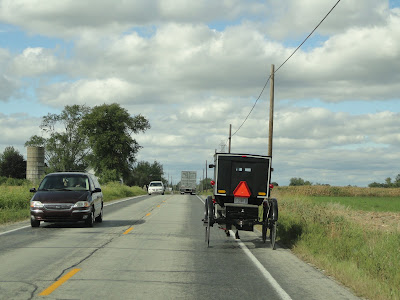 We were surprised to see the buggies were licensed -- don't know why that surprised us, but it did...guess because we are not used to seeing horses and buggies on the road. 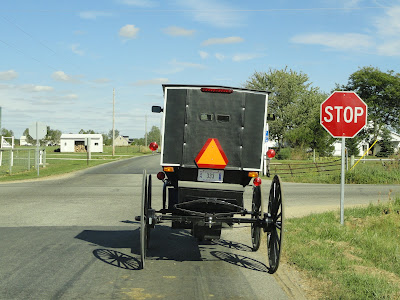 And we were again surprised -- the buggies had their own parking spaces at Wal-Mart. 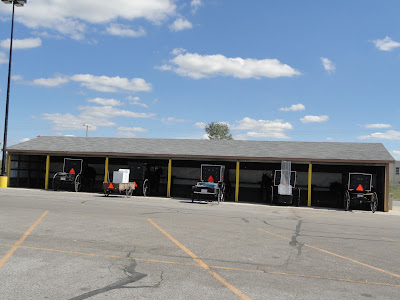 Did you notice the washer on the cart behind the buggy?
We found the fairgrounds. 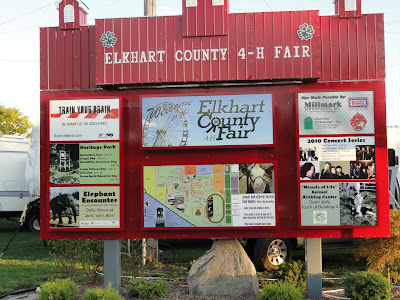 Staff and workers were there getting everything set up and ready for the Escapade. 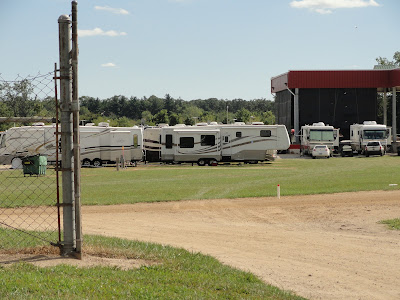 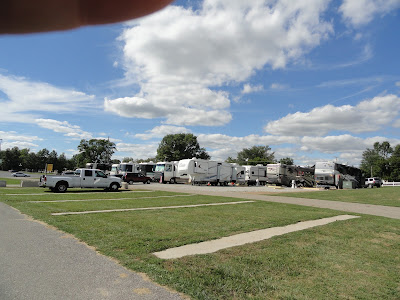 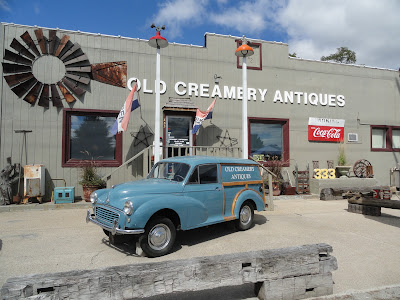 We wanted to try some Amish food, so we went to the Das Dutchman Essenhaus.

Known as the largest restaurant in Indiana, the Essenhaus is best known for its family-style meals -- you can choose from an old-fashioned, sit-down, all-you-can-eat, family-style meal or a buffet, or you can choose from a menu.  Since this was new to us and we wanted to experience it all, we chose the old-fashioned family-style meal.  We had fresh baked wheat bread, tossed salad, crisp broasted chicken, homemade bread dressing, mashed potatoes with gravy, homemade noodles and green beans.  In keeping with Amish tradition, the food was brought out on platters and bowls to be passed around the table.  And for dessert, we had a warm apple dumpling with coffee -- YUM, YUM...we were so busy eating we didn't even take a pic of our food, but it was DELICIOUS!! 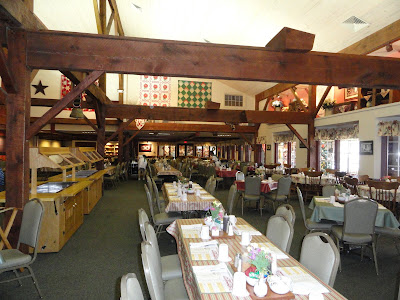 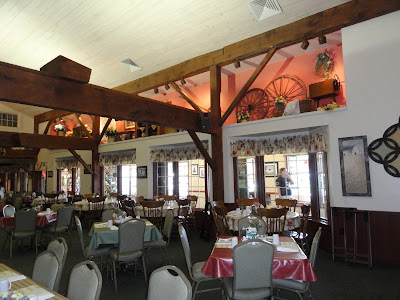 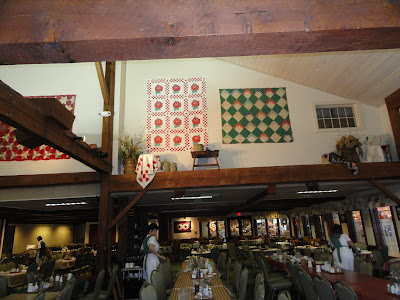 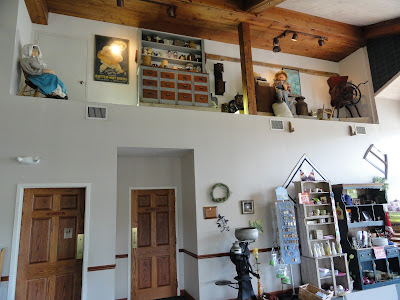 They were having a vintage car show on the grounds outside. 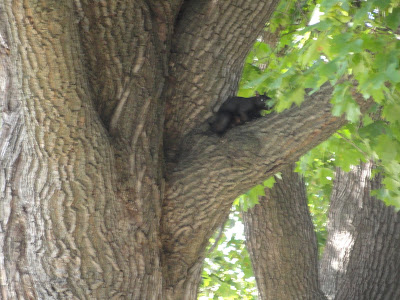 On Friday, we moved the motorhome from Elkhart Campground to the Goshen Fairgrounds for the 50th Escapee Escapade. 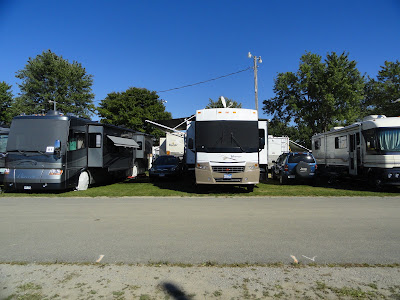 Our friends, Paul and Margery encouraged us to join the Escapees club and also informed us of the 50th Escapade.  We planned to meet them at the fairgrounds around 10:30 so we would be parked near each other.  We arrived approximately 30 minutes before they did.  The parking staff did an excellent job getting everyone parked...and Paul and Margery were just a short skip and a jump down the road, parked between two fifth-wheels. 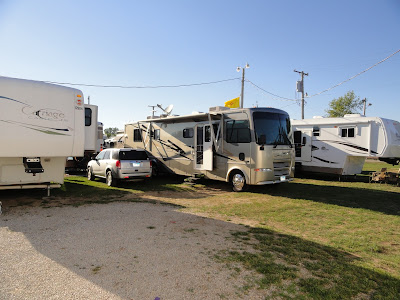 On Saturday, we registered at the Hospitality building where we picked up our information packet. 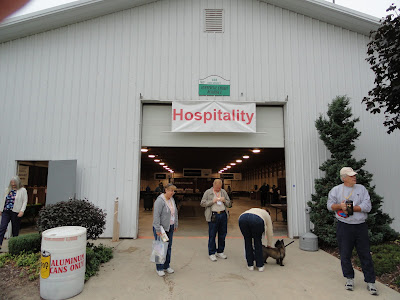 By the time the Escapade was to begin on Sunday afternoon, there would be approximately 800 RV's parked at the Goshen Fairgrounds -- WOW! 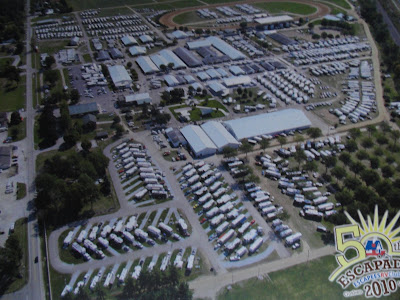 We were off with Paul and Margery to visit the RV Museum.  I will report on that in our next posting and we will also share some of the classes we participated in at the Escapade, so stay tuned.

God bless our voyage and our family and friends and keep them safe wherever they may be.

Posted by Alan and Marilyn McMillan at 7:32 PM