One of the first places Alan wanted to see when we started this journey was Devils Tower - we finally made it on Tuesday, August 17.  We drove a short 130 miles from Buffalo, Wyoming, to Mountain View RV Park in Sundance, Wyoming. 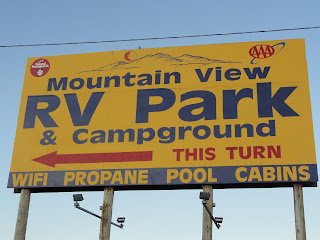 Obviously, it was a KOA once upon a time. 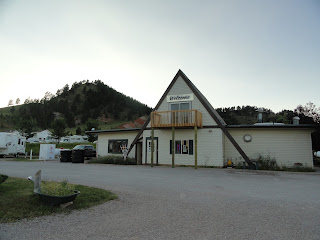 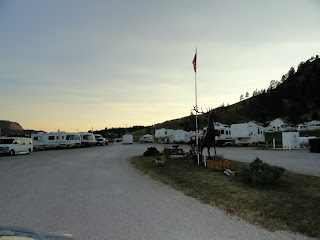 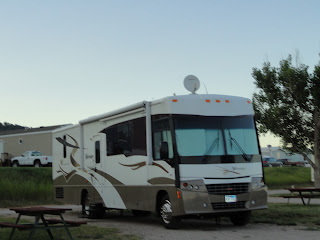 I was a little concerned about staying at this park.  When I called to make reservations, the lady who answered the phone was a little snippy -- saying if we failed to show, we would still be charged...we could call to see if anyone had been turned away because of our reservation and being a no-show, and if so, we would be charged for one night.  However, when we arrived, she was very helpful with information about the area.  This is a Passport America park, but it cannot be used during the summer months, but we did get a 10% Good Sam's discount, so the total cost was $33.05 -- which is a little steep.   We are finding that to be the case -- paying more in camping fees.
We unhooked the car and took off to Devils Tower -- 28 miles from the campground.  As we got closer, Alan began taking pictures. 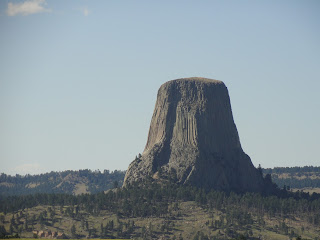 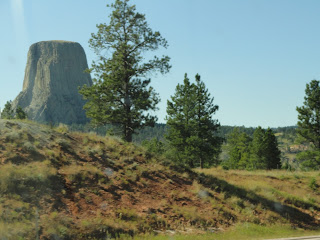 Devils Tower rises 865 feet from its base to the summit and is 5,112 feet above sea level.  This 1347 acre park is covered with pine forests, woodlands and grasslands, deer, prairie dogs and other wildlife.  Also known as Bear Lodge, it is a sacred site for many American Indians.  Many Native American legends have been passed down through time, but this legend seems to be the most popular:  One day, an Indian tribe was camped beside the river and seven small girls were playing at a distance.   The area had a large bear population and a bear began to chase the girls.  As they ran back toward their village, the girls jumped up on a rock about three feet high and began to pray to the rock, "Rock, take pity on us; Rock, save us." The rock heard the pleas of the young girls and began to extend itself upwards, pushing them higher and higher out of the reach of the bear.  The bear clawed and jumped at the sides of the rock and broke its claws and fell to the ground.  The bear continued to jump at the rock until the girls were pushed up into the sky, where they are to this day in a group of seven little stars.  The marks of the bear claws are still there.  What a story!

President Theodore Roosevelt declared Devils Tower the first national monument in 1906.  When the proclamation establishing Devils Tower was published, the apostrophe was unintentionally dropped from "Devil's" and this clerical error was never corrected. 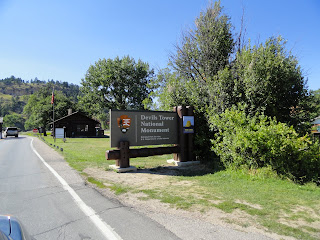 Devils Tower played a prominent role as an alien landing point in the Steven Spielberg's movie, Close Encounters of the Third Kind."
How did this tower form you ask?   Well, the process began 50 million years ago.  Molten rock was injected  into layers of sedimentary rock, forming the tower one-and-half miles under the earth's service.  It has taken millions of years to erode away the surrounding sedimentary rock to expose the tower seen today.  Geologists agree that Devils Tower was formed by the intrusion igneous -- meaning fire -- material.  What they cannot agree on is how that process took place.  Some researchers believe the molten rock comprising the tower is all that's left of a large explosive volcano.  Others have suggested Devils Tower is a volcanic plug, or that it is the neck of an old volcano.  As the lava cooled, hexagonal columns formed.  As the rock continued to cool, the vertical columns shrank horizontally and cracks began to occur at 120 degree angles, forming six-sided columns. 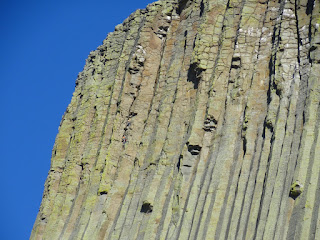 We visited the Visitor's Center that had several displays and mementos for sale. 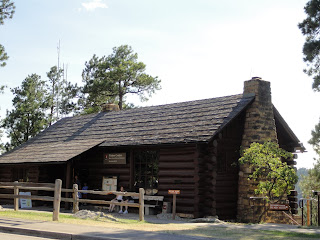 We decided to walk the mile and 3/10ths around the base of the tower. 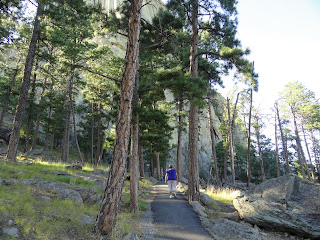 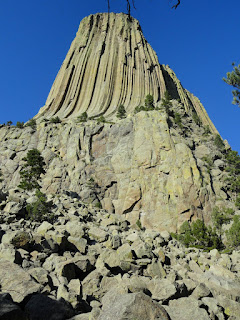 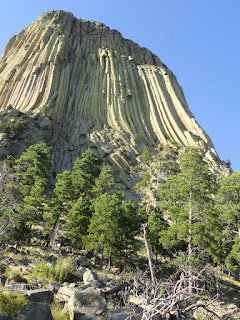 The rocks and boulders around the base of the tower are actually broken pieces of columns that have fallen from the sides.  Weather is always prying at the cracks.  Water collects in the crevices and as the temperature changes, the water freezer and thaws, jimmying the cracks.

As mentioned earlier, the tower is held sacred by many American Indians.  Indian ceremonies are conducted year round at the tower, often using traditional prayer clothes. 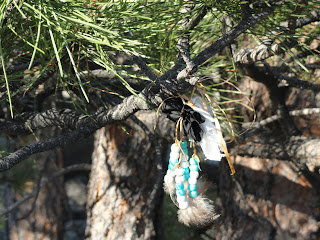 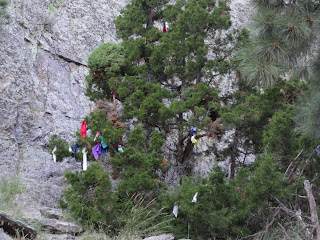 Devils Tower is comprised of symmetrical columns, which are the tallest -- some are 600 feet -- and widest -- 10-20 feet -- in the world.  Along the trail, columns lie toppled among the pine trees. 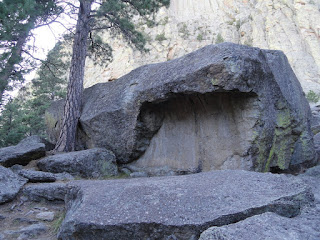 After a column falls to the ground,  a larger surface area is exposed to the elements.  As time passes, the angles and corners become weathered and rounded.  According to historical information on file,  no large rocks or columns have fallen since the park was established in 1906.  Some believe this is a clue to how long the tower will stand.


As we walked around the tower, we saw trees scarred by fire.  As we learned, fire plays a natural role in the growth cycle in pine forests.  The thick bark of mature trees protects them from low-burning, fast moving fires. 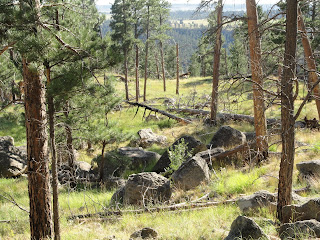 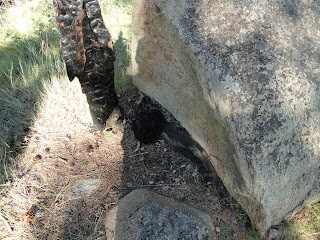 People have suppressed fires here for over 100 years.  Without regular fires, fuel accumulates to hazardous levels.  Fires then burn very hot and long, killing mature trees.  A forest may take 100 years to recover from such a fire.

The tower boasts a colorful climbing history.  In 1893, two local ranchers first climbed the tower using a wooden stake ladder.   It is in the center of this pic but very difficult to see, but it's been there -- since 1893. 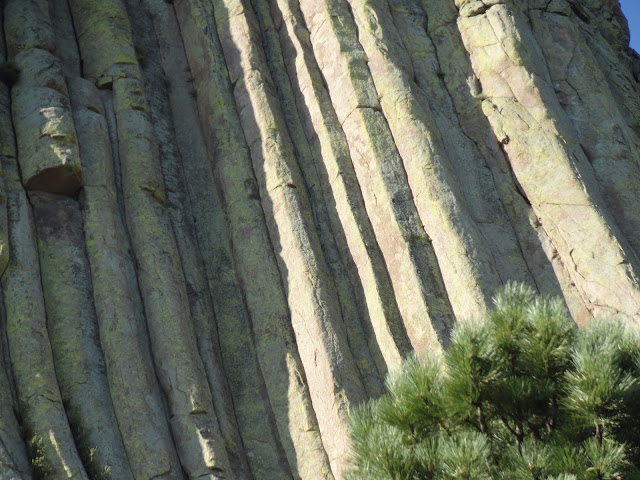 Maybe this pic will help. 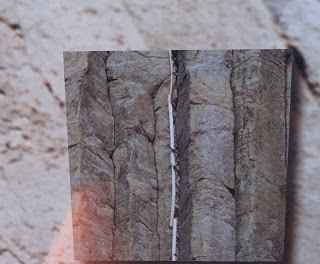 The National Park Services considers climbing to be an acceptable recreational use, but also recognizes the tower as a sacred site to many American Indians.  Out of respect for traditional cultural practices, a voluntary climbing closure is in effect in June every year and visitors are asked to refrain from climbing the tower during this time.


While we were there, we saw these climbers: 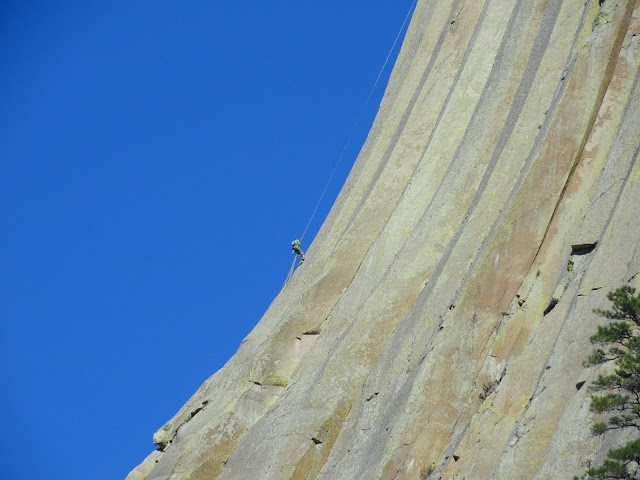 In this snapshot, it's not easy to see...but they are left of center, near the top -- orange shirt and white hat.  There's actually three of them, but very difficult to see. 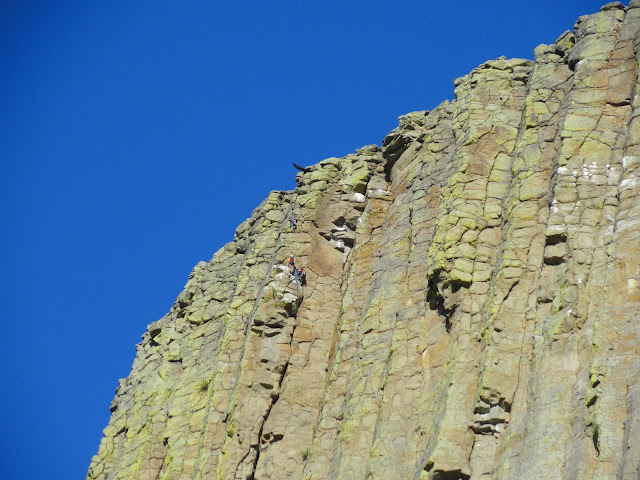 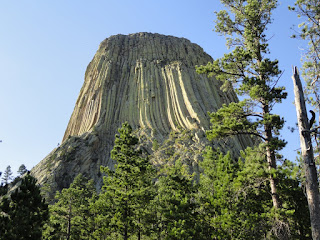 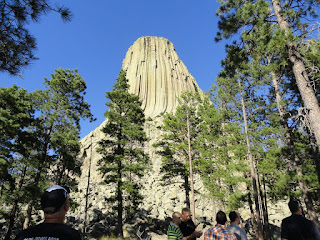 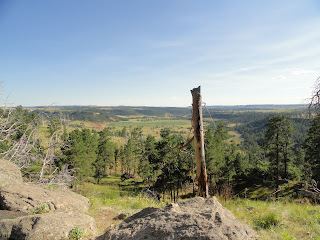 I must admit I wasn't that interested in Devils Tower when Alan talked about it.  I'm not much of a science fiction buff and the only thing I had heard about the tower was the fact it was in the movie "Close Encounters of the Third Kind."  However, I did enjoy visiting, seeing and learning about Devils Tower and walking the path around the base.  I wouldn't mind coming again if we could time it where we could see a Native American ceremony.
Leaving the park, we again saw wildlife -- 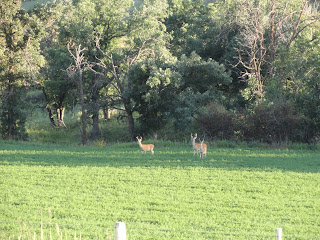 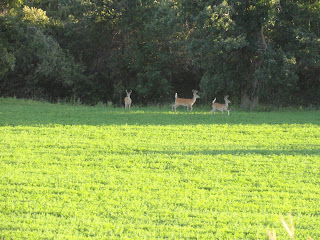 This baby was trying hard to get away. 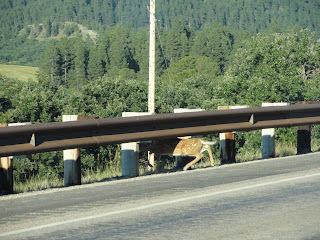 It was a short time in Sundance for us as we move on to Rapid City and Ellsworth AFB FamCamp in South Dakota.  Please come back to see what we find in and around Rapid City and Ellsworth AFB.
We pray whoever reads our blog enjoys it and is somehow blessed by it.  We continue to pray for traveling mercies and God's blessings on our voyage -- as well as blessings for our family and friends.
Posted by Alan and Marilyn McMillan at 12:38 PM