Where did the year 2010 go?  In some ways, it seems like it was a long time ago -- in other ways, it seems only yesterday that we started our adventure as fulltime RV'ers.  As we reflect on our first year as fulltimers, we feel blessed and thankful for the wonderful opportunity to travel and see out great USA.  We experienced seeing places we had heard about our entire life but never dreamed we would ever see.  History was never one of my fortes in school, but I found as we traveled, we both began to have a new awareness and appreciation of those who had gone before us.  We also learned a great deal about ourselves.  I am really proud of Alan, who drove the Motorhome like a pro through large cities such as Atlanta, Dayton, Cincinnati, etc.  We even scooted -- literally -- around Chicago, trying not to get too close.   I mastered using our GPS, affectionately referred to as "Sally," named by our daughter who was called Sally by one of her uncles when she was younger.  I never understood why, but it apparently stuck with her.  I even learned how to read a map.  Not having a conventional oven, cooking with a convection oven has been a challenge that I am still trying to master.  Alan is continuing to grasp the fact that men and women think differently.  We have been married almost 30 years.  During that time, we have worked opposite shifts -- I've always worked days and Alan has worked mainly nights and many weekends as well.  So, we had to learn how to be a couple again, since we were thrust into being with each other 24/7.   Having been a supervisor most of his adult life, Alan had to re-think being a husband and I had to learn how to hold my tongue, which has never been easy for me.  Thank the Lord, we have adjusted and are now ready to begin our second year of traveling and seeing what 2011 holds for us.


I haven't posted on my blog in months, mainly because I got frustrated with not being able to keep up and by the time we returned to North Carolina in mid-October, I was just plain tired.  Another point we take away from our 2010 experience is we don't have to do it all at once.  I think we got in such a hurry to "see it all" and didn't take the time to rest in-between.  It really happened when we left Jackson, Wyoming, for Yellowstone.  We entered Yellowstone from the South and exited through the East gate to the RV park where we had reservations.  The next morning we decided to enter Yellowstone in our car through the North gate.   The drive was beautiful, but it took us much longer than we anticipated.  We did not plan this part of our journey very well.  So, as it turned out, we spent nine hours in the car and didn't see nearly all Yellowstone has to offer.  We asked the RV park if we could stay another night, but they were full.  Instead of looking for another place to rest nearby -- even at Wal-Mart -- we chose to move on.  This year we want to go slower, stay in one place longer -- isn't that the whole point of being retired -- going at a slower pace?


We really enjoyed the Escapees 50th Escapade in Goshen, Indiana, where we attended various classes, to include Picasa, metal detecting, Geocaching, digital photography, RV maintenance, just to name a few. 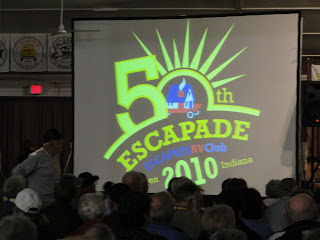 The Escapade was very well organized and extremely informative and we look forward to attending another one in the future.  The 2011 (51st) Escapade will be held in Gillette, Wyoming.   There were over 800 Motorhomes, fifth wheels, travel trailers, etc, parked at the fairgrounds in Goshen.  For more information on the Escapees Club, check out:  www.escapees.com


We spent an extra week in Goshen waiting on a new supplemental brake, since ours died after being used a short two months.  For those who do not know what a supplemental brake system is, it attaches to your toad's brake and assists in slowing down the toad in an emergency situation and is a requirement in most states. Ours is an Even Brake by Road Master and they exchanged it at no cost to us and no questions asked.


Still in Goshen, we continued to take in the sights.  One day we drove to Michigan City to see Lake Michigan.  Although it was a cool, cloudy day, we enjoyed our trip. 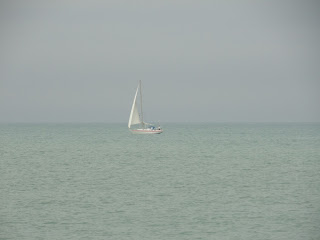 Since we were in the area,  we also drove by Notre Dame -- mainly to see the football field, not that we are Notre Dame fans, but we do love college football.  The pic is actually the gates to the practice field. 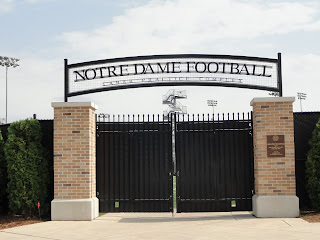 Each gate at the stadium bears the name of a past Notre Dame coach, along with a statute of that particular coach.  Below is a pic of the legendary Lou Holtz. 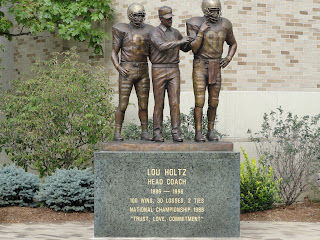 We had lunch at the South Side Diner, which was featured on the Food Network's Diners, Drive-ins and Dives. 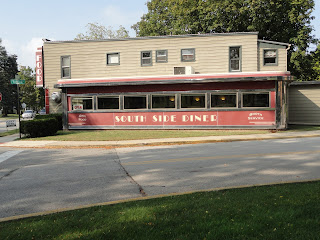 Known for its Philly-cheese steak, Alan selected to have one, while I chose an old-fashioned hamburger...both came with fries -- a definite heart attack in the making. 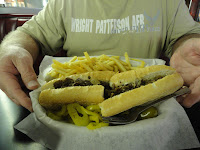 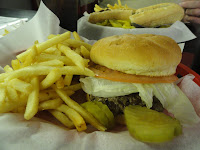 We left Goshen and headed south and east towards North Carolina.  We were happy to be heading back to North Carolina, especially to leave the trains in Goshen that passed nearby all day and night.  On our way, we spent a week at the Raccoon Valley RV Park -- an Escapees park -- north of Chattanooga, Tennessee.  Our son and family were scheduled to return to Dallas after spending a year in Virginia and passed through Chattanooga, so we met them for lunch at a local Cracker Barrel.   We were thrilled we had the opportunity to see them. 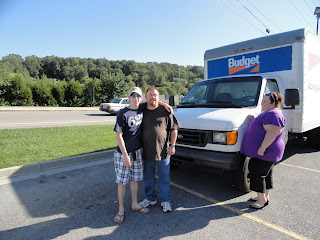 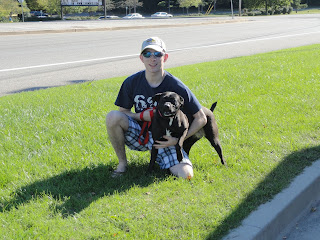 Grandson and his dog Zoey


While in the area, we also visited the Museum of Appalachia. 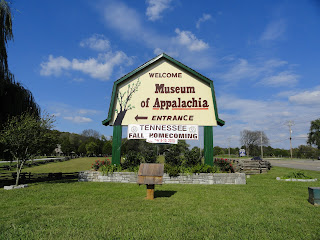 The Museum of Appalachia, located in Norris, Tennessee, is 20 miles north of Knoxville and is a living history museum that interprets the pioneer and early 20th-century period of the Southern Appalachian region.  The museum is a collection of more than 30 historic buildings rescued from neglect and decay and gathered on 63 acres of picturesque pastures and fields. The museum also preserves and displays thousands of authentic relics, maintains one of the nation's largest folk art collections, and hosts performances of traditional  Appalachian music and annual demonstrations by hundreds of regional craftsmen.  The museum's grounds mimic a working pioneer Appalachian farm, with gardens growing typical crops and animals, such as goats, chickens, turkeys and peacocks roaming the grounds freely.
There is no way I can begin to show everything this Museum has to offer.  I will, however, give a few examples of what you can expect to see.
Mark Twain's Family Cabin 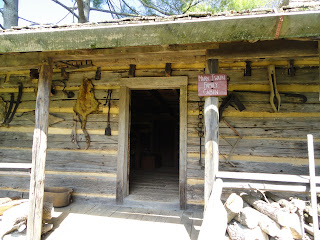 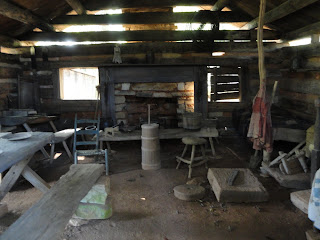 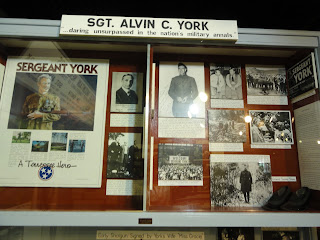 Sergeant Alvin C. York was born in Pall Mall, Tennessee, on December 13, 1887.  Sergeant York was one of the most decorated American soldiers in WWI.  He received the Medal of Honor for leading an attack on a German machine gun nest, taking 32 machine guns, killing 28 German soldiers and capturing 132 others.  Gary Cooper portrayed Sergeant York in a movie simply entitled, "Sergeant York."  This is only one small part of the exhibit that can be found in the museum's "Hall of Fame." 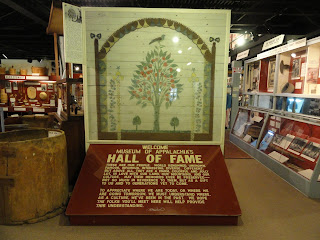 If you are ever in the Chattanooga area, this museum is well worth your time to visit.
Following a couple of days of hard driving, we made it back to North Carolina in mid-October. We were definitely looking forward to hanging out with daughter and family -- and being quiet -- after traveling over 7500+ miles in four months.


In November, we decided to take an unplanned trip back to Arkansas to visit my brother, Jerry and sister-in-law, Suzanne. 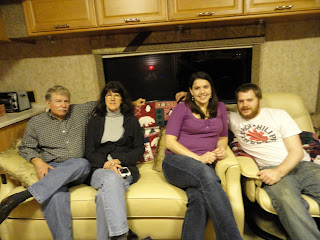 Jerry will be traveling to India on a mission trip on January 22.  We pray for his safety and God's guidance as he ministers to those he comes in contact with and look forward to hearing about his experience when he returns.


We stayed at Maumelle Park in Little Rock, a Corp of Engineer park on the Arkansas River.  We love this park and enjoyed seeing the fall colors and barges cruising down the river. 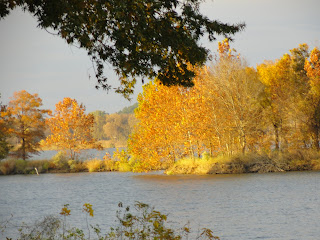 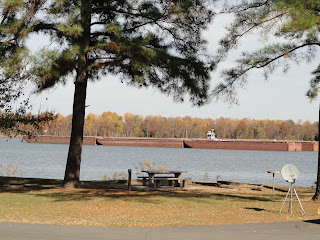 Squirrels were everywhere at the park -- they even ran on top of the Motorhome and we had to replace two water hoses due to the squirrels poking holes in them. 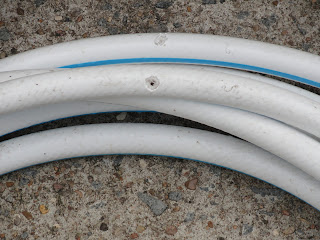 We ate pizza at one of our favorite places -- Larry's Pizza -- where the new dessert item on the menu was Grandma's Banana Pudding Pizza -- YUM! We surprised our church family by showing up for church.  We got our "Bro Bob" fix and enjoyed visiting with friends, such as Jim and Sandra, as well as Georgeann and Glen, Donna and others. 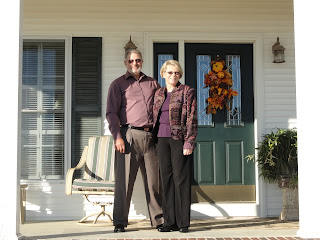 We had dinner with friends, Linda and Jimmy, and Carol and her dog, Ruffles, came to visit us at the park.


Making this trip to Arkansas also afforded us the opportunity to spend Thanksgiving with our son, Jon, and family in Ashdown, Arkansas, near Texarkana.  We spent a week in Ashdown at Millwood State Park.  Because of the time of year, there were not many RV'ers there. 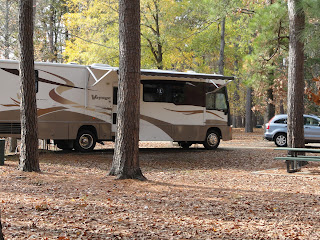 We left Arkansas the Monday following Thanksgiving and it took us a week to return to North Carolina.  We took the southern route, traveling Interstate 10 through Louisiana, Alabama, Tallahassee, Florida, where we met Interstate 95 through South Carolina into North Carolina.


One of my 2011 goals is to make more of an effort to maintain our blog.  We are currently working through a couple of medical issues and making plans for our next adventure.  We are truly blessed and thankful for what God has done in our lives and we trust Him to take care of  our health needs through the doctors we have found in North Carolina.  We don't know what God has planned for our future, but we are excited to find out.

Posted by Alan and Marilyn McMillan at 1:17 PM