On Wednesday morning, June 16, we headed to WV.  I had decided I wanted to take the opportunity to visit three sisters and a brother I had not seen in 32 years, as well as, to visit my dad's grave site.  My parents divorced when I was very young and my mother returned to AR from NC with my brother and me when I was only three months old.
For the past several years, I have been corresponding with three sisters -- Cheryl, Janet and Christiana and brother, Keith.  One sister, Johnnye -- the youngest of the girls -- died of breast cancer six years ago.   Since I had not been in WV since 1978 when our dad died, I wanted to take the opportunity to stop and meet with Janet, Christina and Keith.  So, we started searching for a campground nearby and made the decision to stay at Pipestem Resort State Park, a few miles north of Princeton.
We had a beautiful, cool drive across the southwest corner of VA into WV.  We didn't even need the AC. 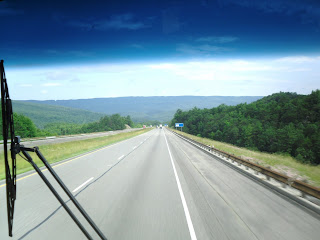 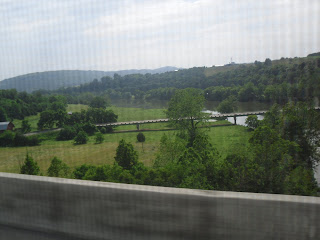 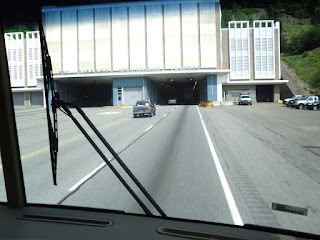 You can see how narrow it is, but at least we didn't have water flowing over us like we did when we crossed Chesapeake Bay last April. 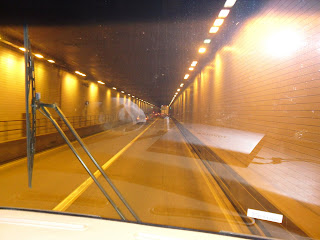 After we exited I-77 at Exit 14 in Princeton, we turned on to a narrow, winding road that would lead us 14 miles to Highway 20 where Pipestem Resort State Park is located.  As we were driving along Highway 20, low and behold, on the right-hand side of the road, was a local drive-in -- haven't seen an operational drive-in a very long time.  The movies are shown on weekends only and they also have a flea market on Sundays. 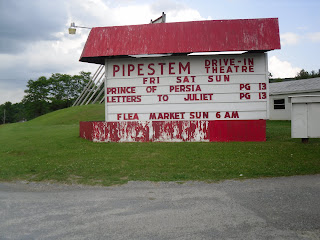 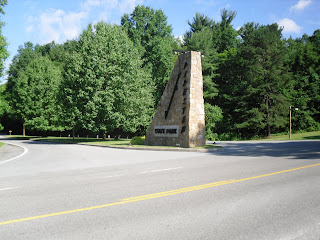 We were curious about the name "Pipestem" and figured it had something to do with early Indians in the area, but that was not the case.  The name was derived from a narrow leaf, meadow-sweet local shrub used for making pipe stems.  WOW, I would have never guessed that.

We stopped at the office.  I had attempted to make reservations online, but you cannot make online reservations for less than two days.  It was early in the day on  Wednesday, so we decided to just take our chances. 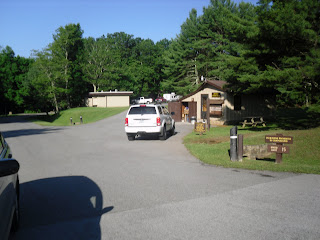 They told us the available sites, to go pick the one we wanted and to come back and let them know.  They do have pull-thrus but not many.  Site 11 was a pull-thru but it was not level.  Instead we chose site 22, which was a back-in.  We unhooked the car and I returned to the office to inform them of our selection and to pay the $22 for water and electric.  Returning to the MH, I began helping Alan get set up.  We had previously made the decision that when we are only staying one night, we would only put the bedroom slide out.  One of the young girls from the office knocked on our door and told us they were sorry but site 22 was reserved and we would have to move.  We were disappointed.  We drove around and finally settled on a pull-thru, site 35, with only elect -- 50 amp.  The cost then went down to $18.  The pull-thrus are narrow and are all aligned with the road.  One of the rangers told Alan these sites used to be tent sites.  There were wooden platforms for the tents, but the wood rotted, so they turned them into pull-thrus.  We didn't plan on being there except to sleep, so we were thankful we had a spot. 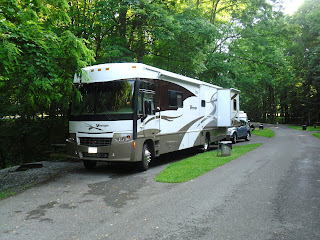 It was pretty secluded.  There were three pull-thrus in a row. This was the scene directly across from our site. 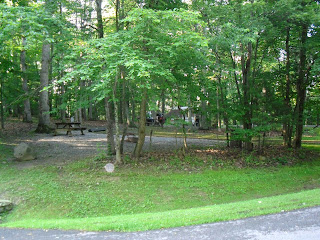 This was the view directly in front of the MH.  As you can see, there's somewhat of a drop-off, making it a very narrow site, but, like I said, it was only for one night. 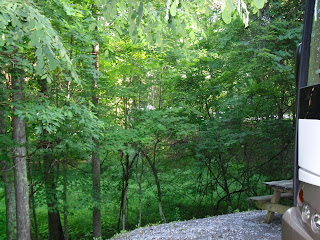 We then drove back to Princeton to search for my dad's grave.  Both Cheryl and Christina had given me directions.  As we drove through the cemetery, I was very surprised to see the name "Pennington" on several headstones.  Since Pennington is my mother's maiden name, I had to take a few snapshots. 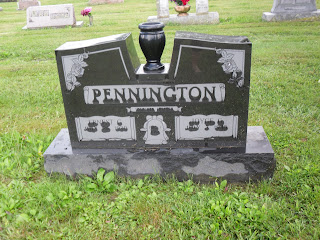 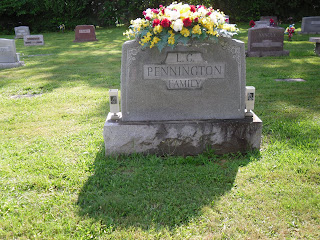 I couldn't help but wonder if these were some of my ancestors and wished I knew more about my genealogy.  I know the Penningtons came from England,  but I'm not sure if they first settled in NC or PA, then crossed Tennessee into Missouri and Arkansas.
Unable to locate dad's grave marker, I asked the office for help.  They were very kind, looked it up and actually took us to it. 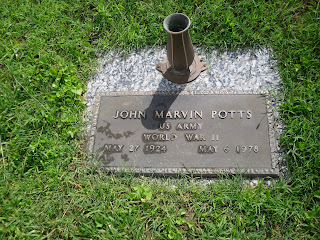 We then drove to the Texas Steak House where I met Keith (bottom right), Tim (Janet's husb), Janet and Christina, sitting next to me. 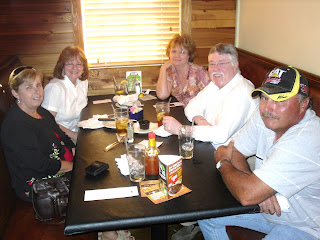 We ate and visited and laughed and just had an awesome time.  We then drove back to Janet's house where we continued to talk and laugh and talk and laugh. 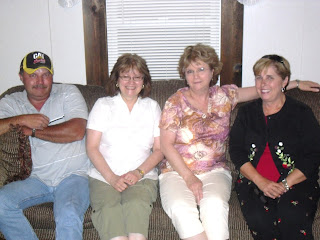 As I stated in an earlier blog, Cheryl lives about 45 minutes from Alissa in Clayton, NC, and I visited with her at Sarah's graduation pig-picking.  We can't wait to return to WV, where Christina promised a cook-out at her house:)
The following morning, we took a tour of Pipestem Resort State Park.  The park is located in the gorge of the Bluestone River.  The park has two hotels, one of which can only be reached by aerial tramway to the bottom of the gorge. 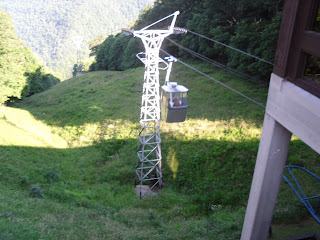 There are also 26 fully-equipped wood cabins. 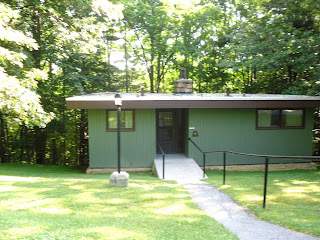 There's also a regular and a 3-par golf course...not sure what the difference is, but maybe you do.  There are several restaurants, tennis courts and even a horse stable. 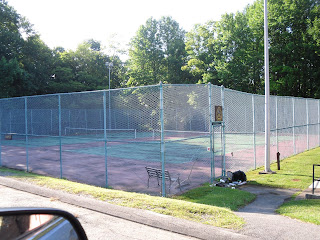 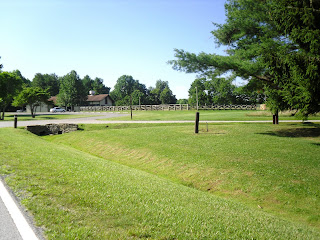 We also saw some of the wildlife.  We saw this doe in the back of the hotel -- someone was throwing apples and carrots to it. 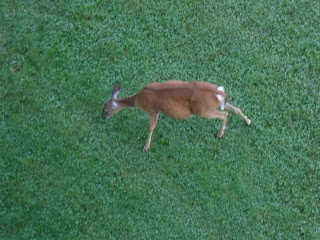 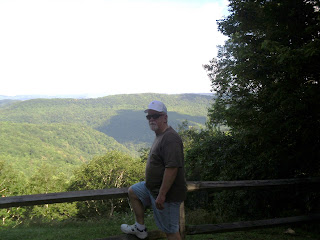 We hope to return one day for a longer visit, but we will make reservations for site 22 -- the back-in site.
In the meantime, we roll on to our destination in SD, feeling very blessed -- again -- that we have this opportunity to see so much of God's handiwork.  Again, we ask God to continue to bless our voyage, as well as our family and friends.
Posted by Alan and Marilyn McMillan at 9:42 PM