We have really been busy this week -- not only did I visit Banner Elk, North Carolina, but Thursday we took our daughter and grandson to Wilmington to tour the USS North Carolina, as well as the aquarium at Kure Beach.

However, I want to first share what I have learned about the quaint bustling mountain town known as Banner Elk.  The first people to occupy this area were the Cherokee Indians.   Cherokee artifacts indicate the tribe used the land around Elk River as hunting grounds. In 1840, Martin Luther Banner -- a man of Welsh descent -- first saw the area now known as Banner Elk in the valley of Elk Creek.  He was just passing through on his way to Nashville, Tennessee, when he recognized the natural beauty of the North Carolina mountains and decided he would return.  He did return with his family and in 1848,  the first official settlement was established.  Eventually, the family grew to 55 members and the area where they lived  became known as Banner's Elk, which was shortened to Banner Elk in 1911 when the town was incorporated.  Rumor has it that the town was named after an elk -- one of the last -- that was allegedly shot by one of the Banner kids.  The little red dot in the northwest area on the following map indicates Banner Elk.

Early settlers were farmers and fur traders.  Today, agriculture is a large part of the economy of Banner Elk, as the area is known as the "Christmas tree capitol of the world," growing millions of Frazier fir Christmas trees like these: 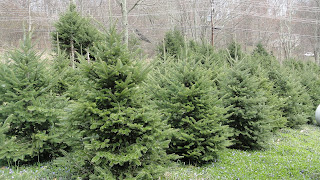 As winter begins, Banner Elk welcomes thousands of families to the many "Choose N Cut" farms to select a Christmas tree.  Once the holiday festivities are over, the area becomes a "ski town."  Known as the "Ski destination of the South," winter sports enthusiasts flock to the area for skiing, snowboarding and tubing at the area's larger resorts, Sugar Mountain and Beech Mountain.  Grandfather Mountain is North Carolina's largest attraction and is the highest peak in the Blue Ridge Mountains.

The 228-foot suspension bridge is more than a mile in elevation.  It was built in 1952 for $15,000  but was reconstructed in 1999 to the tune of $300,000.  It is America's highest suspension footbridge and I've been told you can see forever.  I honestly do not know if I could walk from one end to the other -- and look down while doing it.  We did not make it to Grandfather Mountain on this trip, so I did not take this picture...it is from the Internet.  We hope to return to Banner Elk sooner than later and visit Grandfather Mountain, the swinging bridge and everything the area has to offer.
Banner Elk is also home to Lees-McRae College, a private four-year liberal arts school affiliated with the Presbyterian Church with over 900 students from more than 20 states and countries.  LMC is known for their Summer Theater program and National Championship Cycling and Soccer programs.

The population of Banner Elk is less than 1000 and approximately 18,000 folks make up Avery County.

Now for my very own personal perspective of Banner Elk.  At one point  during  WWII, my father was assigned to what is now Camp Robinson in North Little Rock, Arkansas.  When my mother graduated from high school, she moved from her small town in Arkansas to the "big city" of Little Rock to work. 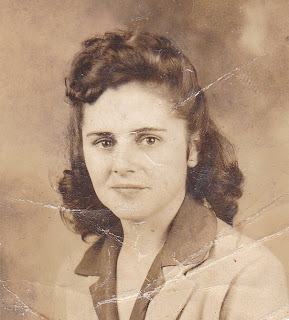 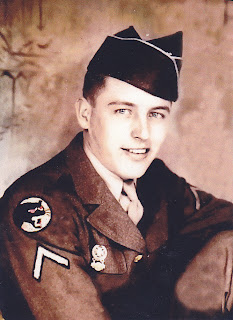 My Parents
Catha and John

Somehow their paths crossed and they began dating.  Of course, he was soon shipped off to the Pacific, but they kept in touch through letters.  When the war was over, he returned and they married in June 1945 and moved to Banner Elk.  You see, my dad was born and raised in Banner Elk.  They settled into married life and my brother Jerry and I were both born in Banner Elk in Grace Hospital. 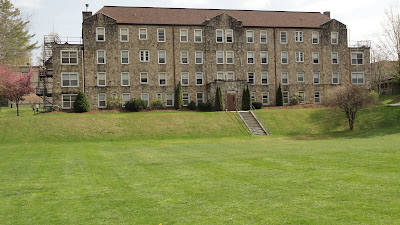 The building that once housed Grace Hospital is now Tate Hall at Lees-McRae College
My dad suffered from what my mother termed "shell shock."  Today it would be classified as Post-Traumatic Stress Disorder.  When I was three months old and Jerry was two, my mother left my dad and returned to Arkansas and they divorced.  She did what she thought she had to do for Jerry and me.  Through the years, we had very little contact with our dad.  As everyone knows, times were very different back then -- no cell phones, no computers, but we do have several letters we exchanged.  I actually only remember seeing my dad once when I was 27 years old when he came for a short visit.  Several months after that meeting, he suddenly died in May 1978 at the age of 53.  I traveled to West Virginia to attend his funeral, where I met my five half-siblings (4 girls and 1 boy), as well as other family members.

Several years ago, Jerry received a Christmas card from our sister Christina and we started communicating through email.  Then sister Cheryl moved about an hour from where we are now in North Carolina at our daughter's and we were able to "reconnect."   A picture of my five siblings, along with their Mother, follows: 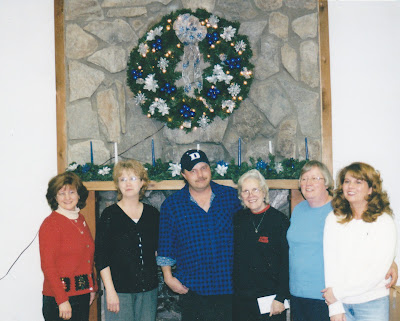 (l-r) Christina, Janet, Keith, their Mother Mary Lou, Cheryl and Johnnye
This photo was taken a few years ago -- they are a beautiful family!
Last Monday, Cheryl and I went on an adventure -- to Banner  Elk.  Cousin Pauline and her husband Cecil served us a great lunch of lasagna, hot bread, salad, fresh apple cake and brownies -- WOW, was it good and I ate way too much.

Pauline, Me and Cecil
Cousin Carolyn also joined us 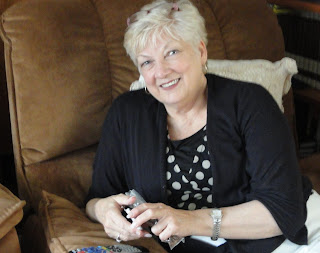 Cousin Pauline, Sister Cheryl, Cousin Carolyn and Me
They say I look like them:)
Pauline and Cecil live in our grandparents' house...of course, it has been remodeled, but the chimney is the same. 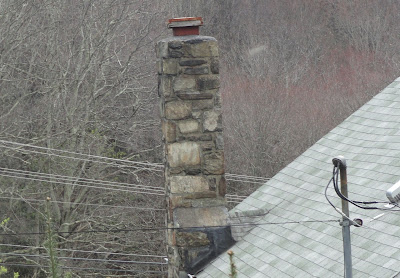 As you can possibly tell from looking at the surrounding trees, Spring hasn't totally sprung in Banner Elk.
Behind their home is the little house we lived in many, many years ago.
Then -- the only other time when I visited Banner Elk. 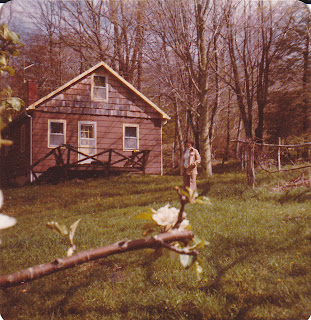 And now -- what a difference!

After visiting with Pauline, Cecil and Carolyn, we left Banner Elk and drove about an hour to visit Aunt Clara, the only surviving sibling of my dad's. 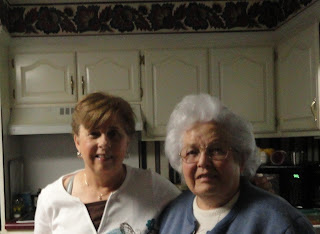 I finally found where my "shortness" comes from.  I have always been the shortest in my family.  Aunt Clara is just a tad shorter than me -- at 5'1".  She is 89 years young.
Sister Cheryl and Aunt Clara 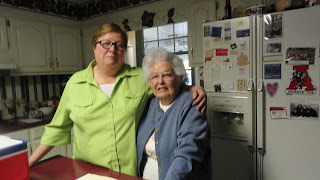 Before we left the area, we also visited Cousin Gail. 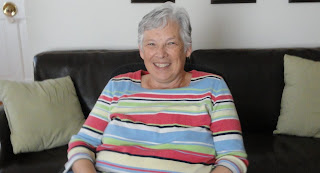 Aunt Clara is Carolyn and Gail's Mother.
I am blessed that I had the opportunity to meet and visit with these family members.   I have often wondered about this side of my family...now I am getting some answers to my questions.


Pics from the area 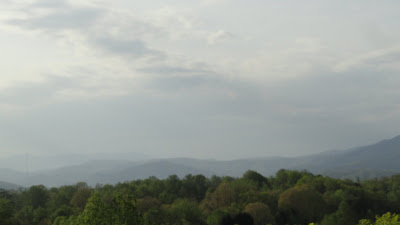 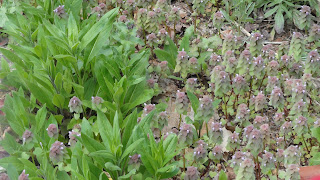 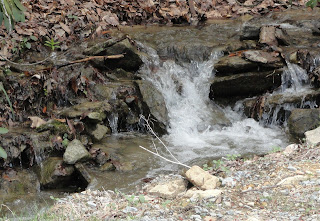 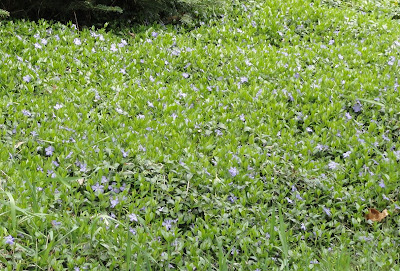 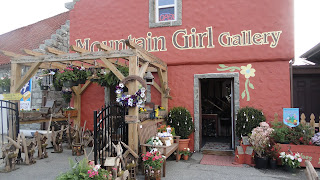 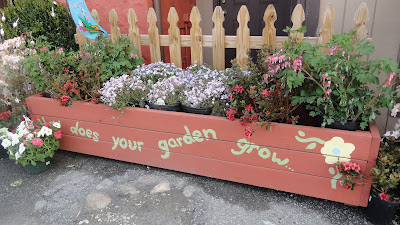 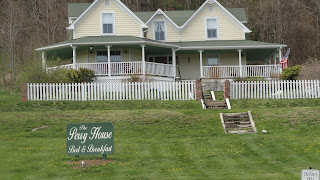 I had a wonderful childhood, surrounded by grandparents, cousins and other family members.  I now  feel a real personal connection to the mountainous area of Banner Elk as well.

Thanks for stopping by and taking the time to read about my personal journey.  My prayer is that my family and friends will live each day to the fullest because we never know what tomorrow will bring.  In the meantime, may God continue to bless our voyage, as well as our family and friends, near and far.
Posted by Alan and Marilyn McMillan at 12:33 PM