As we prepared to leave Mitchell, South Dakota, we had to take a picture of our neighbors' "setup," who also were preparing to leave.  They have their big truck for hauling their nice 5th wheel, as well as a Smart car.  The gentleman credited his 28 years as an engineer in the ingenuity of his camping rig -- pretty impressive. 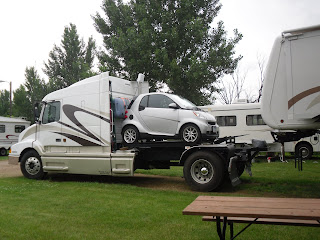 Since we have to return to Bloomington, Illinois, to complete our AC repair, we wanted to go a different route than we did coming.  So we headed back East on I-90.  At Albert Lea, Minnesota, we headed south on I-35 -- more cornfields, more soybeans, more hayfields. 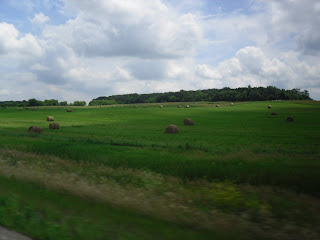 We found an RV park in Clear Lake, Iowa.  It  did not offer any discounts.  There was a state part not far away, but it was $20 for electric only.  Oakwood RV was $25 a night for full hookups, so we opted for Oakwood.  When we first pulled in, we were not impressed, but it had great reviews on www.rvparkreviews.com.  Initially turning on to the road that led to Oakwood RV Park, there were potholes.  Then when we saw the entrance way, we were "oh-boy, what have we gotten ourselves into." 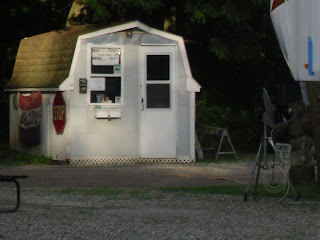 HOWEVER, what a pleasant surprise we found as we were led to our site by the camp host.  Most of the sites -- except for the seasonals -- were pull-throughs. 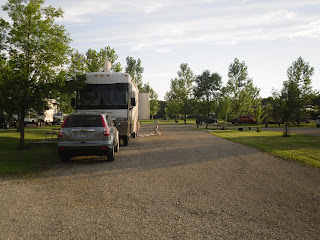 As you can see, they are really long and room enough for another camper, but no one moved in next to us.  The sites were all gravel and level with a patio and picnic table. 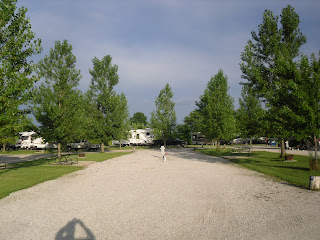 If serenity is what you're looking for, this is the campground for you.  There is absolutely no highway noise at all.  A wildlife management area with a hayfield is on one side, a cornfield on another side and soybeans on another.  You can walk or ride your bikes -- we could've hunkered down and stayed awhile.  It will be one we will want to return to.  We decided to stay two nights instead of one.
The campground also has a laundry and a church, where services are held on Sunday morning.  Campers can also go in the basement during severe weather. 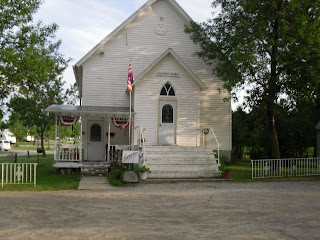 Alan wanted to check out the cornfield where Buddy Holly, Richie Valens and the Big Bopper crashed in 1959 -- "The Day the Music Died."  We both fondly remember the music..."Chantilly Lace and a pretty face..." So, off we went to find the specific cornfield where they crashed.  The first marker was a pair of Buddy Holly glasses. 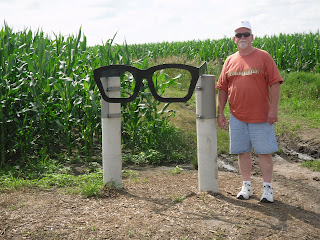 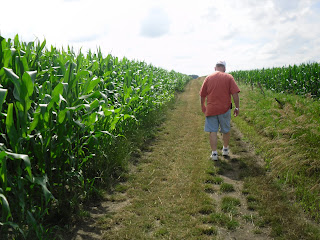 Then we walked through the cornfields to find the "spot."
After walking one-half mile, we came to the memorial.  After 50 years in the elements, there's trash around it. 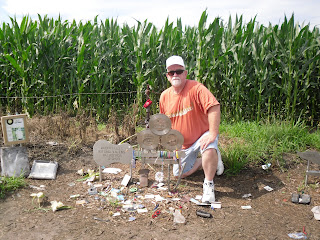 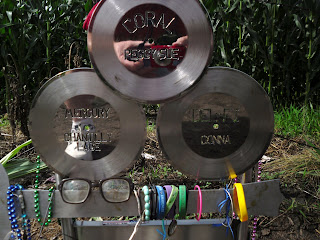 We didn't even realize Forest City, Iowa -- where Winnebago Industries is located -- was so close until we saw the sign in the RV park's office stating the days and hours of their tour. Since we were close and decided to stay another day, we decided we would go to the one o'clock tour the following day.

As we were driving through the town of Clear Lake, we saw this church with the beautiful flowers near the center of town. 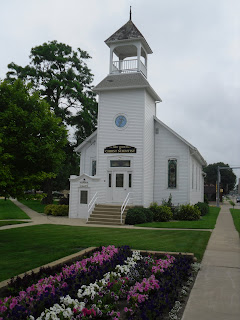 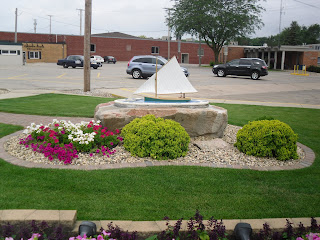 It was the First Church of Christ Scientist.  Since I didn't know much about the church, I looked it up on the net, where I learned it was founded in 1879.  Christ Scientist teaches that the "allness" of God denies the reality of sin, sickness, death and the material world.  Accounts of healing through prayer are common in the church and members traditionally refuse medical treatment.  It is estimated there are 100,000 members.  According to what I read, the church does believe in the Bible.

The church also had a reading room.  I couldn't help but wonder just exactly what was the reading room.  I wanted to go inside -- it was Wednesday and it said it was open on Wednesdays -- but the door was locked.  Perhaps a reader of my blog can enlighten me about the Reading Room. 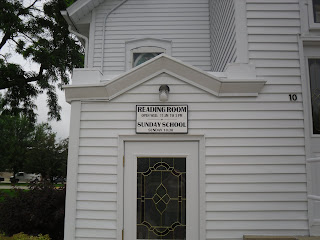 We turned down Main Street and this is what we saw: 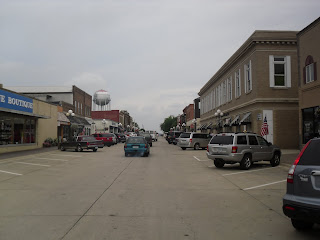 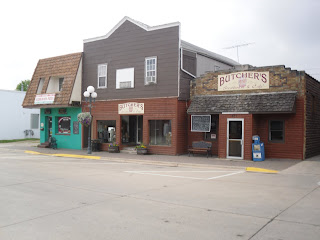 So quaint, so clean, basket of flowers on every light post -- we were impressed.  And at the end of Main Street... 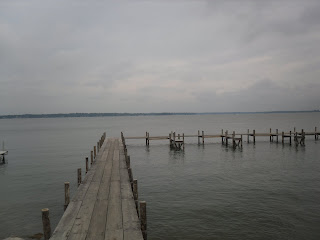 ...Clear Lake and an amphitheater in the park. 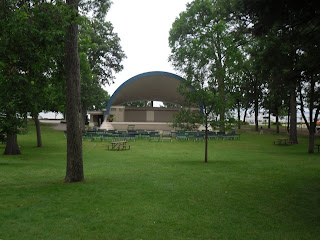 You can launch your boat and then park your vehicle on the street next to the light post with the basket of flowers. 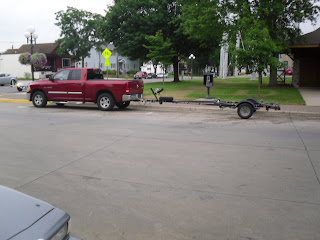 The population of Clear Lake is approximately 9000, but as one merchant told me, on the Fourth of July, there were 50,000 in attendance for the festivities.  We really liked this town and I felt I could live in Clear Lake, except for the 62" of snow they had this past winter.
We drove past the Central Gardens of North Iowa, but we simply ran out of time -- one more reason to return to Clear Lake to see the beautiful flowers and the expansion of their new Nature Education Pavilion that is currently under construction.
Off to Winnebago Industries we went.  We stopped at an AandW for lunch so we could have a frosty mug of Root Beer -- just like the good 'ole days. 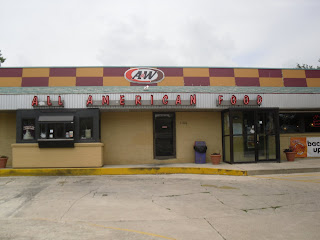 Winnebago Industries is literally in the middle of nowhere.  There is nothing else in Forest City, Iowa, but Winnebago Industries.  Alan was very pleased to learn that the first corporate aircraft purchased by Winnebago in the early 70s was a Falcon 20, undoubtedly built at Dassault Falcon Jet in Little Rock where he was a Production Manager. 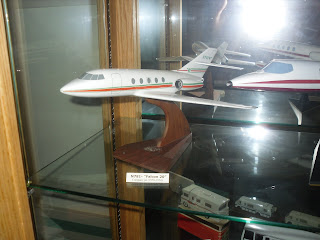 Following that, my photographer didn't take any more pictures.  We did learn that in the early 70s at the peak of Winnebago Industries, they had 4000 employees.  They now have approximately 1600, but Winnebago did survive the latest economic woes where others did not.  Our tour guide attributed that to the fact Winnebago is debt-free.  In addition, we learned Winnebago Industries currently produce 100-130 various motorhomes every week.   We also learned that as a Winnebago-Itasca club member, we can stay on the premises for free for three days -- electric only.  They were preparing for their yearly rally in a couple of weeks with 1400 registrants so far.

The next morning, July 8, we packed up and left Clear Lake, continuing our journey to Bloomington, Illinois.  We certainly enjoyed our stay in Clear Lake and look forward to returning.

We continuously ask God to bless our voyage and our family and friends.  Be sure and check back soon to see where we are and what we find.

Posted by Alan and Marilyn McMillan at 5:55 PM