We had changed our route to South Dakota several times, especially since we ended up in Bloomington, IL, with our busted AC.  We really had no idea what the Amana Colonies were...we were just looking for another Passport America RV park and the Amana Colonies RV Park fit that bill.  Little did we know the history the Amana Colonies hold.

Amana Colonies RV Park has 490 total RV sites and can accommodate big rigs.  When I called to make reservations, I was told it depended on who arrived first whether we would have a 50 or 30 amp site.  We didn't quite understand that until we arrived and saw that the campsites back up to each other.  We arrived first so we pulled through our site and we had 50 amp service.  The cost was $34.24 for full hookups for two nights. 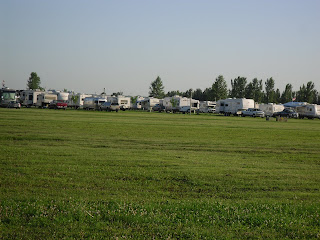 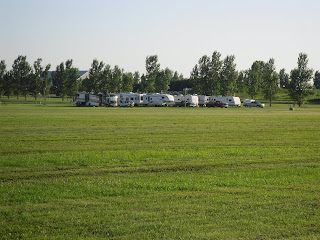 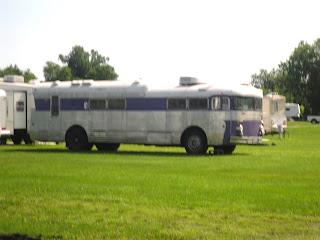 We were pretty close to our neighbors, but it wasn't bad. 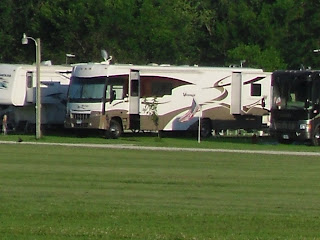 It was lush green and surrounded by cornfields.  This was the view from our front window. 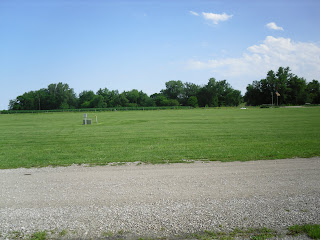 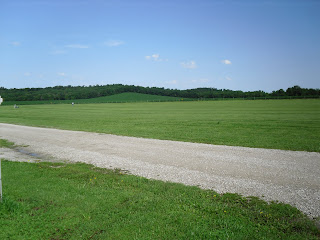 The history of the Amana Colonies actually begins in 1714 in the villages of Germany.  In the midst of a religious movement in the 18th century, called "Pietism," two men, Eberhard L. Gruber and Johann F. Rock advocated faith renewal through reflection, prayer and Bible study.  Their belief -- one shared by many other Pietists -- was that God, through the Holy Spirit, may inspire individuals to speak.  This gift of inspiration was the basis for a religious group that became known at the "Community of True Inspiration."  Though the Inspirationists sought to avoid conflict, they were persecuted for their beliefs.
Persecution and an economic depression in Germany forced the community to begin searching for a new home.  Led by Christian Metz, they hoped to find religious freedom in America and left Germany in 1843.  Members pooled their resources and purchased 5000 acres near Buffalo, New York.  By working cooperatively and sharing their property, the community thrived.  They called their community the "Ebenezer Society" and adopted a constitution that formalized their communal way of life.  When more farmland was needed for the growing community, the Inspirationists looked to Iowa where low-priced land was available.  A valley on the Iowa River seemed promising because of its fertile soil, stone, wood and water.  In 1855, they arrived in Iowa.  The leaders chose the name Amana from the Song of Soloman 4:8, which means to "remain true."  Six villages were established, a mile or two apart over 26,000 acres -- Amana, East Amana, West Amana, South Amana, High Amana and Middle Amana.  The village of Homestead was added in 1861, giving the Colony access to the railroad.
In the seven villages, residents received a home, medical care, meals, all household necessities and schooling for their children.  Property and resources were shared.  Men and women were assigned jobs by their village council of brethren.  No one received a wage -- no one needed one.  Farming and the production of wool and calico supported the community, as well as well-crafted products, like clock making.  Craftsmen took pride in their work as a testament of both their faith and their community spirit.  Amana churches, located in the center of each village, were built of brick or stone and had no stained glass windows or steeples, reflecting simplicity and humility.  Inspirations attended worship services 11 times a week.  Over 50 communal kitchens provided three daily meals, as well as a mid-morning and mid-afternoon snack to all Colonists.  These kitchens were operated by women of the Colony and well supplied by the village smokehouse, bakery, ice house, dairy, huge gardens, orchards and vineyards maintained by the villagers.  Children attended school six days a week, year-round, until the age 14.  Boys were assigned jobs on the farm or in the craft shops, while girls were assigned to a communal kitchen or garden.  A few boys were sent to college for training as teachers, doctors and dentists.

In 1932, amidst America's Great Depression, Amana set aside its communal way of life because it was seen as a barrier to achieving individual goals.  Instead of leaving or watching their children leave, they changed.  They established The Amana Society, Inc, a profit-sharing corporation to manage the farmland, the mills and the larger enterprises and it is still in existence today.  The seven villages represent an American dream come true -- a thriving community founded by religious faith and community spirit.  It was declared a National Historic Landmark in 1965. 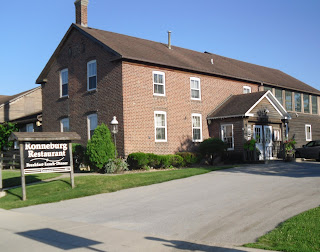 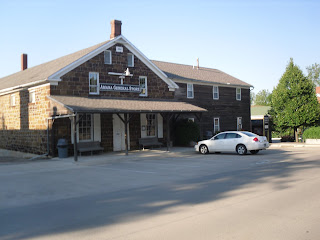 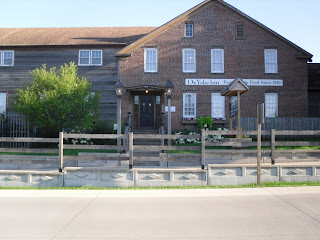 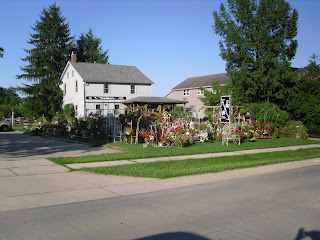 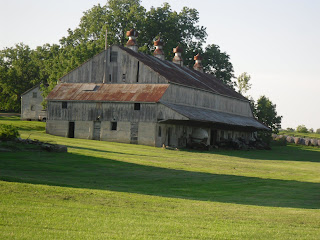 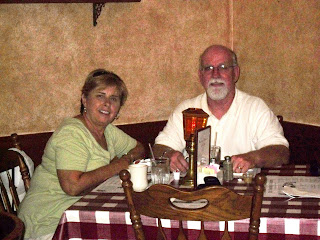 They even provided their recipe for cottage cheese:  1-16oz carton cottage cheese, 1 green onion, 2 Tbsps buttermilk, 1/4 tsp salt, dash pepper -- serves 4.
On Saturday, we drove around the area and discovered Riverside, where a Trek-Fest was going on.  Alan, being the Star Trek buff he is, was delighted to find the future birthplace of Captain James C. Kirk, the captain of the Star Ship, Enterprise. 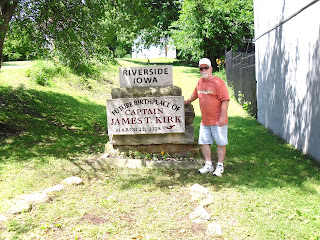 I couldn't help but notice he is scheduled to be born on my birthday in 2228.  I doubt I will be around to see it.
The Old Creamery Theater Company was right outside the gates of the RV park. 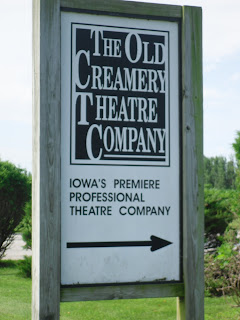 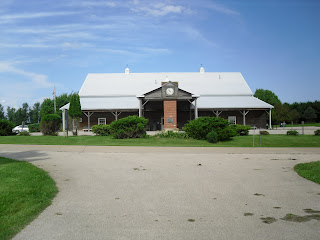 The Old Creamery Theatre Company is a not-for-profit professional theatre founded in 1971 in Garrison, Iowa.  Ten theatre artists formed Iowa's oldest professional theatre company in a vacant building that had once served the community as a co-op dairy -- hence the name.  In 1988, at the invitation of The Amana Society, the Old Creamery Theatre Company opened its first season in Amana.  Neil Simon's "Rumors" was playing.  It was noted that two of the cast members traveled around the country in their RV, acting in theatres and playing golf.
Apparently, the site was also where the 35th Plowing Matches took place in 1888. 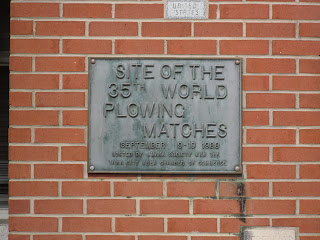 We had another bad storm on Saturday night, with warnings all around us and it poured down.  Sunday morning, RV'ers were leaving the park one after the other.  As we were preparing to leave, I heard one camper ask the owner to use his tractor to pull him out.
We enjoyed our visit to Amana, Iowa.  There is a lot of history we didn't have time to explore...maybe some day in the future.  Iowa is a beautiful state with green, rolling hills. We are very blessed to have this opportunity to explore this wonderful country of ours and we give God all the glory for making it possible.  We don't normally move on Sunday, but we were anxious to arrive in South Dakota.  However, we do not plan to make a habit of traveling on Sunday.  I don't think we would be in such a hurry if we didn't have to return to Bloomington next week.
Stay tuned as we finally make it to South Dakota -- our new "home of record."  May God continue to bless our voyage, as well as our family and friends everywhere.

Posted by Alan and Marilyn McMillan at 11:16 PM