We have wanted to go to VA to visit with Jon, Mindy and Allen since we arrived in NC, so we planned a trip around spring break and Alissa, Matt and Dalton joined us.  This trip would be the first time we towed the Honda.  Alan hooked up our new Blue Ox hitch to the Honda . 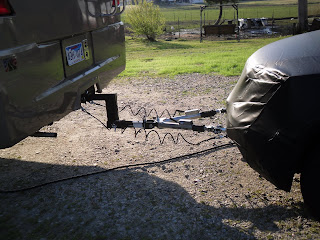 Alan and I slipped on the car cover. 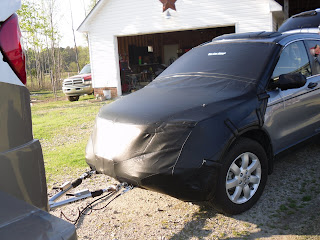 We had never seen one of these car covers until we were staying in the RV park in Beebe.  Our neighbors had one and provided us with information.  We chose it because of its durability and the 100% lifetime warranty.  In case of damage, they will repair it free or replace it, if need be.  Each cover is custom made for the vehicle.  It's pretty simple to install, folds up and is stored in its own bag.  For more information check out:  http://www.coastlinecover.com/tow.htm.
We finally got on the road around 10:00 a.m.  Supposedly, it only takes 4-4 1/2 hours to reach Greenbackville, VA; however, when you're driving a 38' MH, towing a car and driving around 60 mph, of course, it's going to take longer.

We had to drive through Norfolk, Virginia, a city with more than 237,000 population, host to the world's largest Naval base and one of the busiest international ports on the East Coast.  It is also home to the USS Wisconsin.  We would like to go back someday and see the naval base.  We zipped past these ships so fast we hardly saw them, but I was able to snap a picture.  It's not like you can stop a MH on the side of the road in a busy city to take pictures. 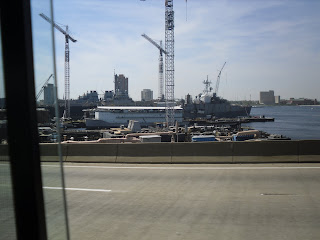 We are always a little nervous when driving through larger cities, but we plugged Garmin in, aka, Sally, and she helped us sail right through.  Alissa is the one who named her "Sally."
We knew we had to cross Chesapeake Bay and drive through a couple of tunnels, but we had NO IDEA what that involved.  Chesapeake Bay Bridge is 17.6 miles long, from shore to shore, and is considered the world's largest bridge-tunnel complex. 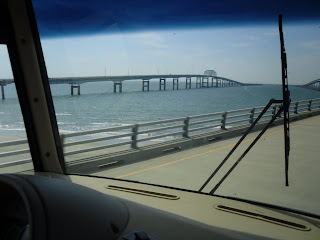 I must admit I was a little nervous  -- sitting high in the passenger seat looking out the window,  it looked like it would be very easy for the MH to topple over the short railing. 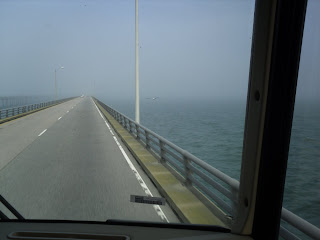 As we approached the first tunnel, the road narrowed to two lanes. 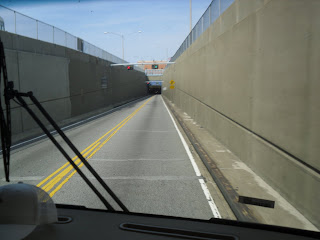 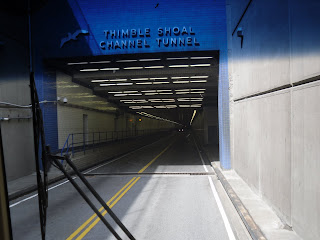 It was especially nerve-wrecking when we saw an 18-wheeler approaching. 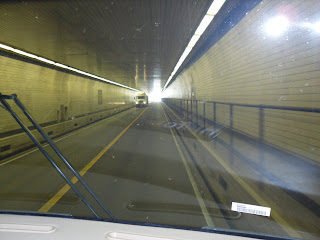 As we approached the second tunnel, through the fog that was beginning to roll in, we saw the largest cargo ship any of us had ever seen.  We were like, "OH MY GOSH, that ship just rolled over the tunnel." 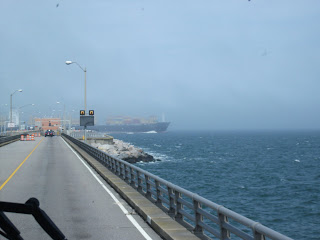 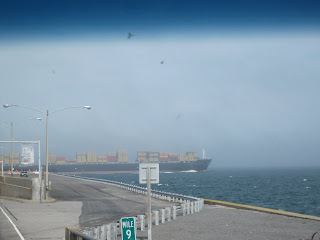 It was a scary thought to think about something rolling across the tunnel as we were driving through it.


The Chesapeake Bay Bridge/Tunnel was selected by the American Society of Civil Engineers as "One of the Seven Engineering Wonders of the Modern World" following the tunnel's opening in April 1964.  The tunnel structure consists of prefabricated composite structural steel and reinforced concrete tube sections 37' in diameter and 300 feet long, sunk into place in a prepared trench in the seabed and covered with a minimum of 10' of backfill material and connected together and finished inside.  The tunnels are anchored on man-made islands constructed in 35-45 feet of water and the islands provide a transition from the roadway to the tunnel tubes.  Each of the four islands is approximately 1500' long and 230' wide, providing approximately 5.5 acres of real estate at a cost of about 5 million dollars in 1964.  In 1965 it was distinguished as "The Outstanding Civil Engineering Achievement by the American Society of Civil Engineers."  From 1995 to 1999, the above water portion of the bridge was increased to four lanes at a cost of almost $200 million dollars.  However, the project did not include expansion of the tunnels, which will be constructed at a later date.  Revenue bonds were sold to finance the project with no local, state or federal tax monies used for construction costs.  Guess that's why it costs so much to cross it -- we paid $28 going and coming for the MH and our towed Honda.  I read if you are afraid of heights, bridges and/or tunnels, they will make arrangements to drive your vehicle across the bridge for you -- at no extra charge.  We also had to pull over and turn off the propane each time before crossing the bridge.  If you want more information, just Google Chesapeake Bay Bridge tunnels -- there's a lot of info out there.
We safely made it across Chesapeake Bay and approximately an hour later, we arrived at our destination:  Tall Pines Harbor Campground in Sanford, VA.  When I was researching campgrounds near the kids, I found Tall Pines, which had wonderful reviews.  We were in such a hurry when we finally arrived, we failed to get a picture of the office/store area where we checked in.  It is new and very nice and the owners are extremely friendly and helpful.  You can see it at this site -- if you're interested.  http://www.tallpinesharbor.com/

They had sites located in the tall pines, but we chose a site that was clear to the sky so we would have good reception for our satellite.  However, we didn't stay around very much to actually watch TV.  We soon learned that there was so much to see and do and so little time.  We would like to go back when the kids are not with us and we are not on a time schedule -- we are retired, you know, we shouldn't be in such a hurry.   After arriving, we jumped in the car and made our way to Jon, Mindy and Allen's house in Greenbackville, approximately 30 minutes away.   We were starving and couldn't wait to see them and eat the delicious Mexican pork Carnitas, cheese dip, beans, etc. Mindy had waiting for us. 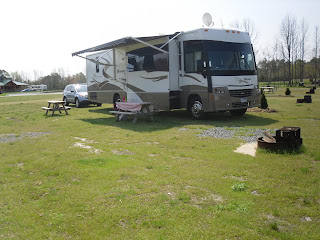 Posted by Alan and Marilyn McMillan at 8:30 PM