We are so blessed to have the opportunity to share this time with our kids/grandkids and pray somehow, some way, those who read our blog will be blessed.  God continues to bless us and we are thankful every day for those blessings.

I have never thought anything about the different breeds of chickens -- that is 'til we came to NC and have been exposed to our son-in-law's love of his mini-farm animals.  Now we are learning about the different breeds of chickens.  One is the Ameraucana.  The Ameraucana chicken was developed in the United States.  The name is a cross between American and Araucana (a related breed).  Eight colors of the Ameraucana are officially recognized for poultry shows by the American Poultry Association:  Black, Blue, Blue Wheaten, Brown Red, Buff, Silver, Wheaten and White.  Ameraucanas have pea-sized combs, full tails, muffs (under the chin) and gray black legs. This pic is of a brown-red hen.
and
they lay light greenish-blue eggs. 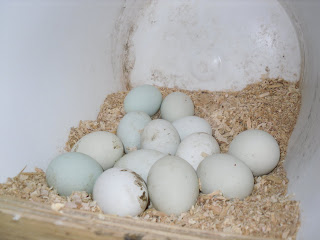 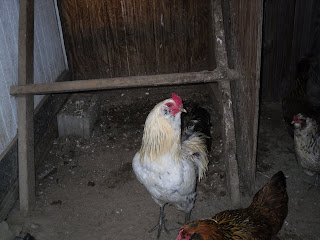 A wheaten and white Ameraucana Rooster.
The Ameraucana was bred from Easter Eggers -- a mixed breed derived from breeding the South American Araucana with Old World varieties. 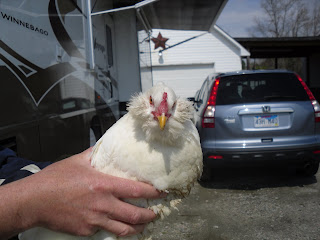 This is the newest Ameraucana to the farm...pure white
Another breed at Old Matt Donald's farm is the Rhode Island Red.  They are a utility birds, raised both for meat and eggs.  They are a popular breed because of their laying abilities and hardiness.  Their feathers are rust-colored, their eyes are red-orange and they have yellow feet and reddish-brown beaks.  They are responsible for laying brown eggs.  And guess what -- they are the state bird of Rhode Island.  They are friendly and make good pets for kids -- however, they can get angry when annoyed.  Most roosters will attack strangers if they feel nervous or have never seen the person.  Both hens and roosters have been known to be aggressive with other chickens and have been known to kill intruding foxes or dogs.  That's why I chose to observe them with the fence between us...lol.  They love Matt and follow him all around because they know the hand that feeds them. 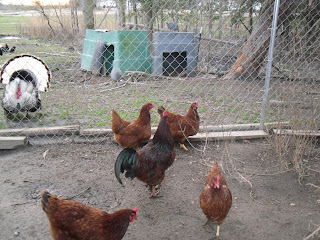 There are other breeds in the Hales' mini-farm, but those two breeds are the most interesting -- at least to me. 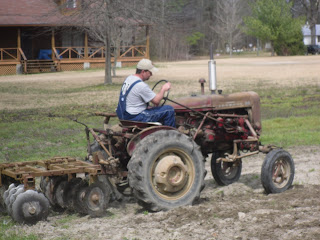 Matt is preparing the dirt for planting his garden. It is still too wet in the center area and we got more rain this week.  He plants a garden every spring -- from potatoes to squash to tomatoes to cucumbers to corn and everything in-between.  I think he needs to also plant strawberries:)  He loves his garden and animals. 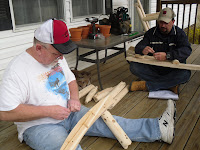 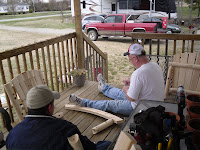 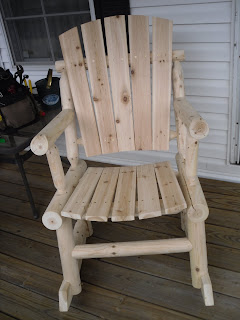 The finished product
One day last week we drove to Greenville, about 45 mins from here to purchase the tow bar and base plate so we can tow our car behind the MH.  While we were so close, we decided to drive on to Goldsboro to check out Seymour-Johnson AFB.  Cannot believe we did not take any pics, but I will say the FamCamp wasn't much -- neither was the BX.  On our way back, we stopped in Wilson for a bite to eat.  We chose Bill's BBQ -- we had forgotten we had eaten there once before and was not very impressed with NC BBQ.  To understand the seating situation, you must know there are several rows of long tables.  A gentleman approached our table and asked if he could sit at the opposite end.  Of course, we said yes.  Soon his wife joined him and we began to chat.  I noticed she was wearing a t-shirt with "Sturgis" printed on it, so I asked if she was from SD.  She said no, that they rode motorcycles and went to the big motorcycle rally at Sturgis most every year.  She went on to say her husband rode a Harley and she rides a trike.  They told us all about SD -- places to go, things to see, etc.  They also talked about Utah.  They spend the winter months in FL.  On this particular trip, they were driving a 1930's car -- Alan thinks it is a Pontiac -- pulling a tear-drop camper he had made.  We enjoyed talking to them.  Following is a pic of their car and camper: 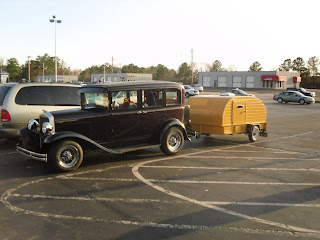 We exchanged cards and left.  When I say "cards," we have learned that all RV'ers have cards with their personal info printed on them and exchange them with those they meet in their travels.  Our mail service provided us with a dozen, but we have now made our own.  Believing that God places people in our pathway for a reason, we drove away feeling Barbara and Bill sat down at our table for a reason.  What was the reason you ask?  We don't know -- maybe to encourage us, maybe just to share their travels with us, but we certainly feel they crossed our path for a reason.  We wish them well in their continued travels and who knows -- our paths may cross again -- maybe in Sturgis.
We've also had the pleasure to watch our grandson, Dalton, play soccer.  He is on a great team that has yet to lose a game -- they are undefeated after playing four games.   Dalton sometimes plays goalie and has only allowed one ball get by to score.  We are very proud of him. 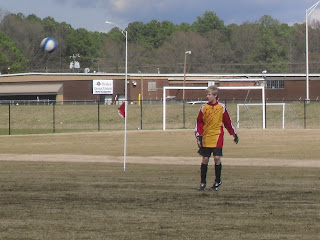 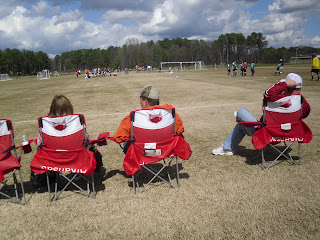 We are proud to sit in our AR Razorback chairs, especially since AR beat East Carolina in a bowl game last December:)
Well, I think I'll end this post.  I enjoy blogging -- it just takes me awhile to actually get it all together and posted.  I still have more to learn -- just can't seem to find the time to "study" and figure it all out.
Thanks for dropping by -- may God continue to bless our friends and family and keep them safe and well and may God continue to bless our voyage.

Posted by Alan and Marilyn McMillan at 12:09 PM