Although we hated to say good-bye to the kids, we were eager to get on the road.  We said all our farewells Sunday evening and prepared to leave Monday morning.

We got up when we heard Matt start his truck at 6:30 Monday morning.  It seemed to take way too long to get the car hooked up to the MH and to get our new Even Brake set as well, but it was only the second time we have hooked up the car to the MH and the first we have used the Even Brake.  Finally, a little past 8:30, we were ready to pull out of the driveway.  We couldn't help but think about Lucy as we pulled away from the house, but we were thankful she wouldn't have to endure the heat because it was already hot and humid at 8:30 in the morning.

We were finally off on our way to our great adventure...we are blessed to have this opportunity to see this wonderful country.


We tried the engine AC but all it did was blow hot air.  We have never used the engine AC because most of the time when we've driven the MH, it was in the spring, fall or winter and with the open windows and the small fans we have above the dash, we have stayed cool.  Why hadn't we checked the AC before now, you ask?  Ummm, good question to which we have no answer.  Last summer when we took the boys to Cloud 9 in Missouri, we ran the generator and the "house" AC so Dalton and Jordan would be cool.  ANYWAY, that's what we did...we turned off the engine air, turned on the generator and ran the house air.


We decided to take Hwy 421 out of Dunn, NC, instead of getting in all the early morning Raleigh/Durham  traffic on I-40, but first, we couldn't resist stopping at Cracker Barrel in Smithfield for breakfast.  We had cereal earlier but was sure we had worked and sweated it off by now!  Alan had his usual Mama's Pancake Breakfast and I had eggs, turkey sausage, yogurt with fruit and a muffin -- it was way too much food.  I ended up bringing the muffin in a box with us.
We had reservations at the Mayberry Campground in Mt Airy, NC, a mere 242 miles north.  This is the view as we approached Mt Airy of Pilot Mountain, aka Mt Pilot on the Andy Griffith Show.  Pilot Mountain rises 2,421 feet and is one of the most distinctive natural features in NC. 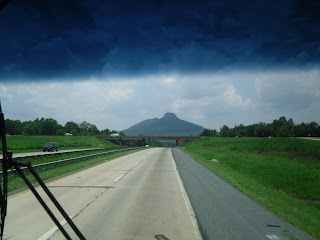 Mayberry Campground has an interesting background:  It is located at the homeplace of the descendants of the Siamese Twins, Eng & Chang Bunker.  The home is still maintained and stands gracefully above the camp sites.  Where's the pic of the house you ask -- we asked ourselves that same question...don't know what happened to that pic:(  The brothers were born in 1811 in Siam (now Thailand) and were joined at the sternum by a small piece of cartilage -- thus the term "Siamese Twins." Their livers were fused but independently separated.  They adopted the name "Bunker" when they became naturalized U.S. citizens.  They married sisters and shared a bed built for four.  Chang and his wife had 10 children and Eng and his wife had 11 children.  Eventually the two households separated and the twins would alternate spending three days at each home.  The twins died on the same day in 1874.  Chang, who had pneumonia, died in his sleep.  When Eng awoke to find his brother dead, his family called a doctor for immediate separation.  However, Eng refused to be separated from his brother and died three hours later.

Mayberry Campground is located a short distance west of Mt Airy near I74 and Highway 601.  It has 95 RV sites and each site has 50/30 amp electrical service, full hookups, including cable and WiFi.  We were escorted to site 7.  All the pads are gravel with grass in-between.  However, there are absolutely no amenities at the campground, so you need to make sure you have everything you need before you get there.  Of course, Wal-Mart is not that far away:)  We do not require many amenities and being it is a Passport America park, and we only paid $31.80 for two nights, we were happy.   The following pic is looking down the road from the back of our Motorhome. 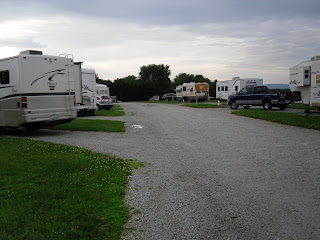 Each road is named for a character of the Andy Griffith Show: 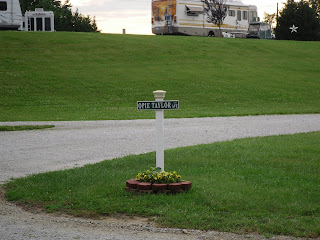 The campground rolls with hills and you can hear the noise of the interstate but only when you're outside.  Other than that, it was very quiet.  Of course, the campground wasn't full either so that probably helped. 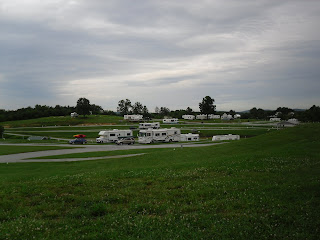 They have a couple of ponds, but we never saw anyone fishing. 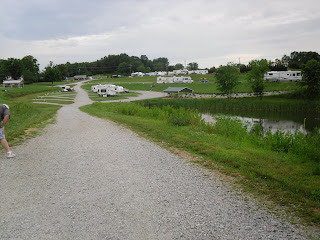 There were several tent sites and were the only ones that had picnic tables. 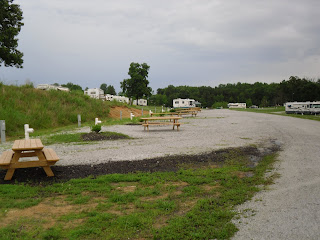 We met our little neighbor -- an 82yo who drives her own 35' MH, sets it up and hooks/unhooks her own toad (her car).   She even led a group of  singles to Alaska a few years ago.  We were so impressed and I felt embarrassed I have never driven -- or even have the desire to drive -- our motorhome.  She told me the biggest fear is fear itself.  I thought we would see her again and I would get a picture, but we didn't:(  I'm going to have to step it up with snapping photographs!

Our trip to Mt Airy was a great way to start our full-timing adventure.  I am finding it somewhat difficult to keep up with my posts, but don't worry, I'm not giving up...I will eventually get there.  In the meantime, stay tuned to see what we saw and did in the town of Mt Airy.

As always, we pray God will continue to bless our voyage, as well as our family and friends and keep them safe until we see them again "down the road."
Posted by Alan and Marilyn McMillan at 9:41 PM